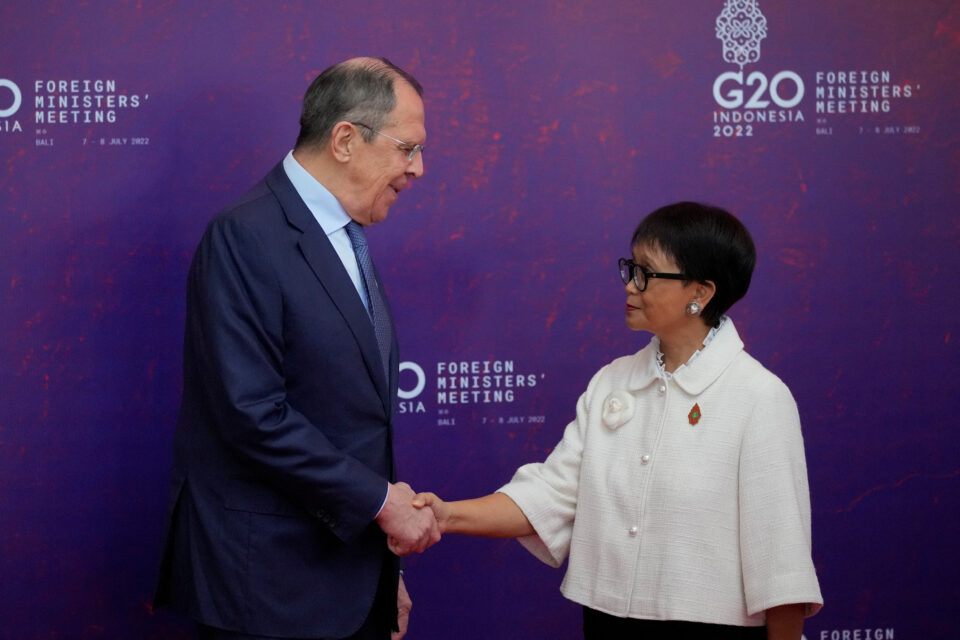 Indonesia urged the G20 on Friday to help end the war in Ukraine, as foreign ministers from the group met for a summit that has put some of the staunchest critics of Russia’s invasion in the same room as Moscow’s top diplomat.

The buildup to the gathering on the Indonesian island of Bali has been dominated by the war and its impact on the global economy, with top officials from Western countries and Japan stressing it would not be “business as usual” at the forum.

Shouts of “When will you stop the war” and “Why don’t you stop the war” were heard as Russian Foreign Minister Sergei Lavrov shook hands with his Indonesian counterpart Retno Marsudi at the start of the meeting.

Underlining tensions in the buildup, Retno said earlier G7 counterparts had informed her they could not join Thursday’s welcome dinner where Lavrov was present.

“It is our responsibility to end the war sooner than later and settle our differences at the negotiating table, not at the battlefield,” she said on Friday at the opening of talks.

Invoking Indonesia’s religious diversity as a example of how divergent beliefs can co-exist harmoniously, Retno urged the G20 to “find a way forward” to address the challenges rippling across the globe. She said the repercussions of the war, including rising energy and food prices, would hit low-income countries the hardest.

A senior official for the Indonesian foreign ministry told Reuters no communique was expected from Friday’s meeting.

“With Russia’s presence and participation, certainly I doubt there would be consensus on Ukraine, for example,” a senior U.S. State Department official said ahead of the summit.

Russia’s invasion has cast a cloud over Indonesia’s presidency of the Group of 20 largest economies this year, with speculation of boycotts from some members and a walkout in April at a finance ministers’ meeting in Washington.

Retno said late on Thursday it was important for the host to “create an atmosphere that’s comfortable for everybody”, noting it was the first time since the February 24invasion of Ukraine that all major players were sitting in the same room.

Lavrov was seated between representatives from Saudi Arabia and Mexico at Friday’s meeting.

A senior U.S. State Department official said on Thursday it was important to prevent “disruptions or interruptions” to the G20 agenda, while ensuring nothing took place that could legitimise Russia’s “brutalising” of Ukraine.

Russia’s invasion, which it calls a “special military operation”, has caused major disruption to the global economy, with a blockade on Ukrainian grain and sanctions on Russian oil and gas driving a food crisis and global spike in inflation.

Lavrov met Chinese counterpart Wang Yi in Bali on Thursday, during which he praised Beijing but lashed out at an “openly aggressive” West.

For the first time in three years, the Chinese and Australian foreign ministers will hold talks on the sidelines of the meeting on Friday, signalling a thaw in relations that has soured over claims of foreign interference and retaliatory trade sanctions.

Volkswagen, partners to invest over $20 bln in car battery business

Russian debt default: two experts explain what it means for Russia and for global financial markets