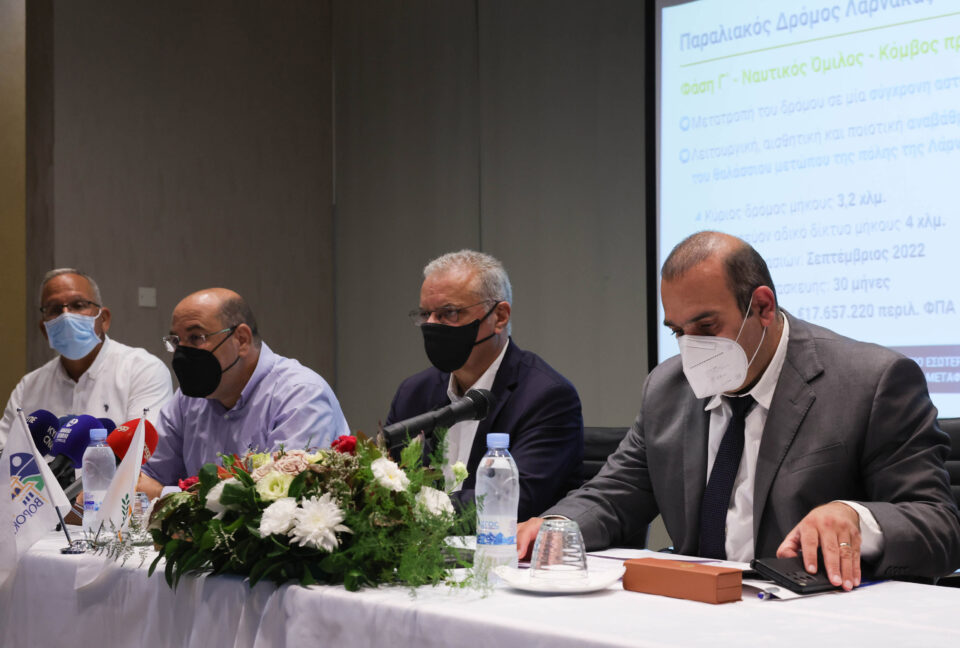 A €17.657m contract for phase three of improvements to the Larnaca-Dhekelia coastal road were signed on Wednesday covering the 3.5 km stretch from the Larnaca nautical club roundabout to the roundabout leading to Pyla, as well as side streets.

Under the contract, signed by the acting head of the department of public works Eleni Kaskiri on behalf of the government and Yiorgos Iacovou on behalf of Iacovou Brothers (Constructions) Ltd, work is expected to start in September and be completed in 30 months.

The secondary road network – some 4 km – is for one or two lanes, pavements, parking spots, green areas, Zebra pedestrian crossings and elevated junctions.

Speaking at the signing ceremony, Transport Minister Yiannis Karousos said that the project was a government priority as it benefits not only the district of Larnaca but facilitates residents and visitors to Cyprus.

The road was part of a wider government plan to improve infrastructure in the district and is linked to the implementation of a sustainable urban mobility plan for Larnaca for which a study is underway and which includes bus lanes, bicycle lanes and improvement works to improve road safety.

Karousos also referred to other large projects in Larnaca, among them the relocation of the fuel storage tanks and the revamp of Larnaca port and marina.

Interior Minister Nicos Nouris said that the vision of his ministry’s department of town planning and housing is to convert the road into a modern urban avenue that gives pedestrians, cyclists, public transport and cars their allocated space and combine this with green areas and trees.

Larnaca mayor Andreas Vyras, who also attended the signing ceremony, conveyed the municipal council’s gratitude and satisfaction with the implementation of such an important project that will resolve serious safety issues.

The Larnaca-Dhekelia road is a very important road artery for Larnaca town and district, linking the town with the Voroklini tourist area and Pyla, and with Famagusta district.

The road’s current condition has inconvenienced locals and visitors alike for years and served as an obstacle to further tourist development, the municipality said in a written statement.

The road fatalities that have occurred on the road confirm the need to upgrade it, it added.

“The signing of the contract and the implementation of the project will significantly improve safety along the specific stretch, as well as circulation, and at the same time convert the road into a modern, functional avenue for pedestrians and for vehicles and satisfy increased demand. At the same time, it will upgrade the coastal front and tourist product of Larnaca,” it said.