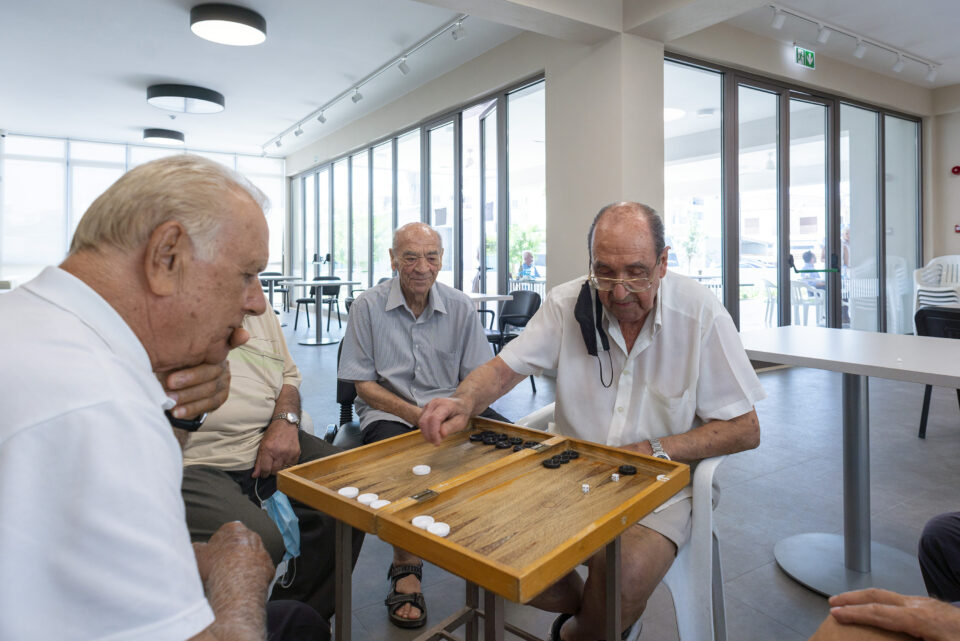 The new centre for elderly people in Limassol (CNA)

The centre that used to be hosted at the old hospital of the district has been relocated to Pattihio adult centre, a project that cost €2.5 million. The amount was co-funded by the European union.

During his visit to the centre’s new premises, in the presence of a social welfare deputy ministry representative, the mayor said the city council’s greatest joy to see planned projects materialised.

The aim of the centre, he added, is to gather elderly people who are looking for ways to socialise and communicate the municipality’s support for the demographic.

Inside, the centre has a library with a reading room, a conference room, kitchen, cafeteria, a storage room as well as a room for people to rest in. There is also a covered seating area outside.

Nicolaides said the premises have been “full of people” since its first day of operation a week ago, with people playing backgammon, talking, reading a book, or simply passing the time. He said that as temperatures soar over the summer, the centre is also available to those who may not have air conditioning at home and want to spend some hours in a cool space.

Commenting on some issues that were mentioned during his visit, Nicolaides said any minor problems will be resolved soon, without expanding further.

Meanwhile, it was also announced that premises belonging to Limassol municipality on Philelinon street are to be renovated at a cost of €90,000 and serve as a daycare centre for people with dementia.

An agreement to this effect was signed by Limassol Mayor Nicolaides and Isabella Karaoli, president of Ithaki, a charitable association supporting people with dementia.

The 480 square metre facility will consist of three rooms, a kitchen, toilets, a covered balcony and a garden.

“Today’s agreement between the municipality and Ithaki I am sure will constitute the start in boosting and upgrading cooperation between us,” he said, noting that both sides shared the vision of a town that will facilitate the daily lives of people with dementia.

Karaoli thanked the municipality, as a dream for the association’s volunteers was becoming a reality. She noted that increased life expectancy had brought dementia to the forefront, most frequently in the form of Alzheimer’s.

Worldwide about 50 million people suffer from dementia with the figure set to rise to 75 million by 2030. In Europe, there are an estimated 10 million people with dementia and based on the same statistics, the number in Cyprus is estimated at 25,000.

The association currently operates two daycare centres, one in Limassol and one in Nicosia, with a third one set to open in Paphos soon.

Once the Philelinon facility is renovated, it will operate daily from 8.00 am to 4.30 pm, free of charge. Services offered will include activities to bolster mental functions, individual and group activities, physical exercise, music and evaluation of patients.

Chelsea sign defender Cucurella for a reported £63 million from Brighton

Snickers maker apologises for advert suggesting Taiwan is a country