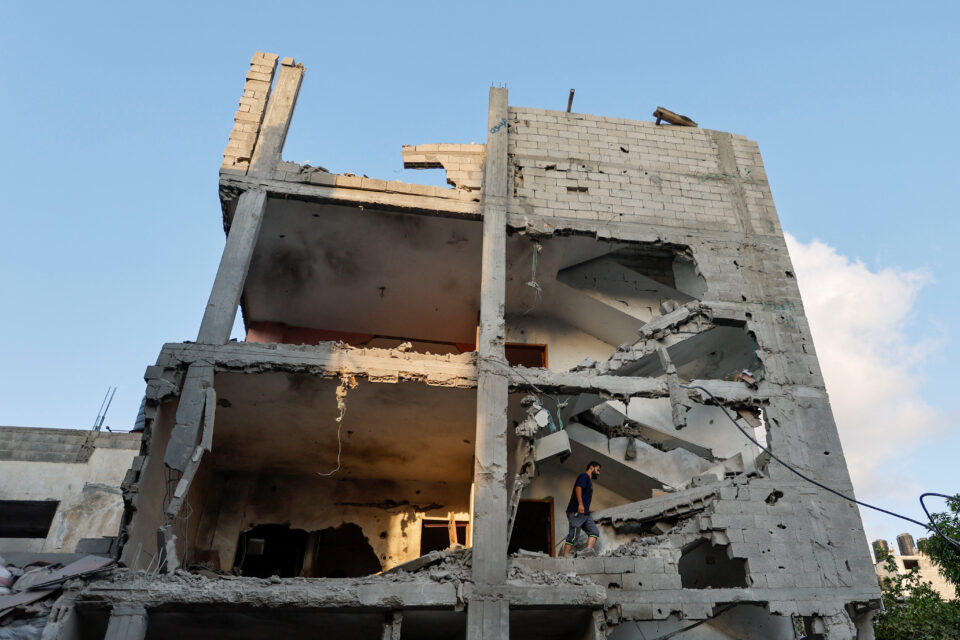 A Palestinian man walks through the ruins of a house at the scene where senior commander of Islamic Jihad militant group Khaled Mansour was killed in Israeli strikes, in Rafah

Israel and Palestinian militants have agreed to a truce in Gaza from Sunday evening as mediated by Cairo, sources said, after a weekend-long pounding of Palestinian targets by Israel triggered longer-range rocket attacks against its cities.

An Egyptian security source said Israel had agreed to the proposal, while a Palestinian official familiar with Egyptian efforts said the ceasefire would go into effect at 20:00 (1900 GMT).

Spokespeople for Israel and Islamic Jihad, the faction it has been fighting in Gaza since clashes erupted on Friday, did not confirm this, saying only that they were in contact with Cairo.

The flare-up, recalling preludes to previous Gaza wars, has worried world powers. However, it has been relatively contained as Hamas, the governing Islamist group in the Gaza Strip and more powerful force than Iranian-backed Islamic Jihad, has so far stayed out.

Gaza officials said 31 Palestinians, at least a third of them civilians, had so far been killed. The rockets have paralysed much of southern Israel and sent residents in cities including Tel Aviv and Ashkelon to shelters.

The Egyptian security source said earlier that the proposed truce was to take effect at 2100 GMT.

On Sunday morning, Islamic Jihad extended its range to fire toward Jerusalem in what it described as retaliation for the overnight killing of its southern Gaza commander by Israel – the second such senior officer it has lost in the fighting.

“The blood of the martyrs will not be wasted,” Islamic Jihad said in a statement.

The salvo came as religious Jews were fasting in an annual commemoration of two Jerusalem temples destroyed in antiquity. Israel said its Iron Dome interceptor, whose success rate the army put at 97%, shot down the rockets just west of the city.

Palestinians dazed by another surge of bloodshed – after outbreaks of war in 2008-09, 2012, 2014 and last year – picked through the ruins of houses to salvage furniture or documents.

“Who wants a war? No one. But we also don’t like to keep silent when women, children and leaders are killed,” said a Gaza taxi driver who identified himself only as Abu Mohammad.

Israel put the onus was on Islamic Jihad to stop shooting. “Quiet will be answered with quiet,” an army spokesman said.

In another potential flashpoint, Jews marking the Tisha Be’av fast visited the site where their ancient temples once stood – the Al Aqsa mosque compound in Jerusalem’s Old City.

The scheduled visits affront Palestinians for whom Al Aqsa is a national as well as a religious symbol. Video circulated online showed some Jews trying to pray in defiance of Israeli regulations, as police moved in to stop them and Muslim worshippers shouted in protest. Read full story

Israel launched what it called pre-emptive strikes on Friday against what it anticipated would be an Islamic Jihad attack meant to avenge the arrest of a leader of the group in the occupied West Bank. Arrest sweeps against the group have continued in that territory.

The hundreds of rockets fired by Islamic Jihad in response are the reason for the continuing operation, according to Israeli security cabinet minister Gideon Saar.

“To the extent that Islamic Jihad wants to protract this operation, it will regret it,” he told Israel’s Army Radio.