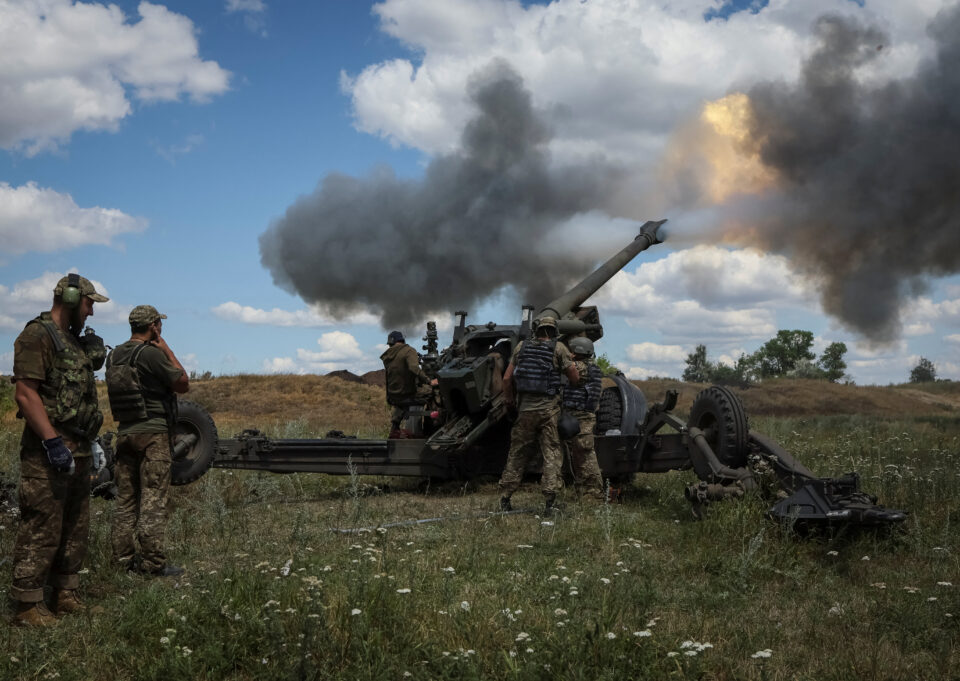 Ukraine reported intense Russian shelling across the frontlines on Tuesday as both sides traded blame for the weekend strike on the Zaporizhzhia nuclear complex which triggered international concern about a potential atomic disaster.

Heavy fighting was reported in frontline towns near the eastern city of Donetsk, where Ukrainian officials said Russian troops were launching waves of attacks as they try to seize control of the industrialised Donbas region.

“The situation in the region is tense – shelling is constant throughout the front line … The enemy is also using air strikes a great deal,” Donetsk regional Governor Pavlo Kyrylenko told Ukrainian television.

“The enemy is having no success. Donetsk region is holding.”

Around Kharkiv in the northeast, Ukrainian troops captured the town of Dovhenke from Russian occupiers and were advancing towards Izium, Ukrainian Presidential adviser Oleksiy Arestovych said in a video posted on YouTube.

“The situation is very interesting. Ukraine‘s forces are moving very successfully. Attempts by Russia to regain lost ground were not successful. Ukraine may end up encircling them,” he said.

In the southeast, the key Antonovskyi bridge over the Dnipro river in Kherson region was targeted again by Ukrainian forces trying to disrupt Russian supply lines.

Reuters was unable to verify the reports.

U.S. Under Secretary of Defense for Policy Colin Kahl on Monday said Russia had suffered between 70,000 and 80,000 casualties, either killed or wounded, since its invasion of Ukraine began on Feb. 24. Russia calls the war a “special military operation”.

United Nations chief Antonio Guterres on Monday called any attack on a nuclear plant “suicidal” and demanded U.N. nuclear inspectors be given access to Zaporizhzhia, the largest nuclear power complex of its kind in Europe.

Russia’s invading forces seized the southern Ukrainian region containing Zaporizhzhia in March, when the site was struck without damage to its reactors. The area, including the city of Kherson, is now the target of a Ukrainian counter-offensive.

Ukraine appealed for the area around the complex to be demilitarised and for the International Atomic Energy Agency, the U.N.’s nuclear watchdog, to be let in. Russia said it too favoured an IAEA visit, which it accused Ukraine of blocking.

Both sides blamed the other for weekend attacks around the complex, which is still being run by Ukrainian technicians. Ukraine said three radiation sensors were damaged and two workers injured by shrapnel.

He called for peacekeepers to run the plant, and warned of the risk of shells hitting the plant’s six containers of highly radioactive spent nuclear fuel.

Russia’s defence ministry said Ukrainian attacks had damaged power lines servicing the plant and forced it to reduce output by two of its six reactors to “prevent disruption”.

Dr Mark Wenman, a nuclear expert at Imperial College London, played down the risk of a major incident, saying the Zaporizhzhia reactors were relatively robust and the spent fuel well protected.

Stepping up its fiscal aid and military spending on Ukraine, Washington announced it will send $4.5 billion in budgetary support and $1 billion in weapons, including long-range rocket munitions and armoured medical transport vehicles.

Overall, the United States has contributed more than $18 billion to Ukraine this year.

While pouring arms and money into Ukraine, the United States was also enforcing financial sanctions against the Kremlin and the wealthy elites who support President Vladimir Putin.

Skoch, a member of the Duma, the lower house of the Russian parliament, was initially sanctioned by the U.S. Treasury Department in 2018 for alleged ties to Russian organised criminal groups. He was hit with further sanctions in the wake of Russia’s invasion of Ukraine.

The plane is now in Kazakhstan, court papers show. Kazakhstan’s embassy in the United States did not respond to a request for comment.

Russia says it is waging a “special military operation” in Ukraine to rid it of nationalists and protect Russian-speaking communities. Ukraine and the West describe Russia’s actions as an unprovoked war of aggression.

The conflict has displaced millions, killed thousands of civilians and left cities, towns and villages in ruins.