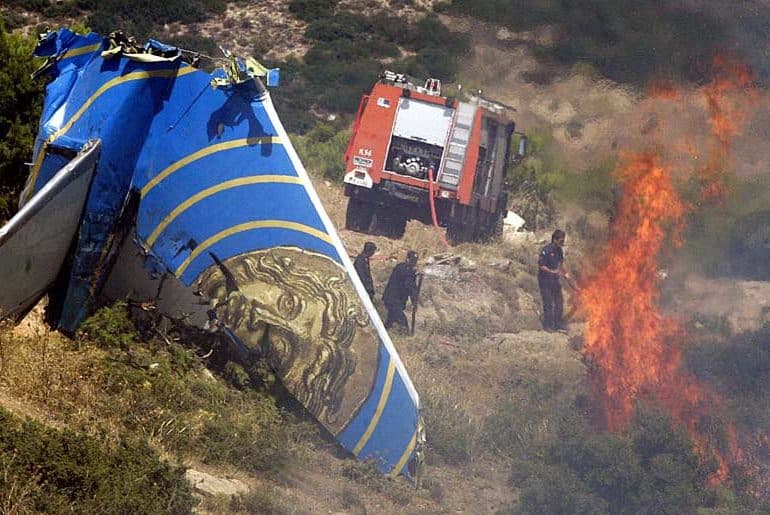 The wreckage of the Helios aircraft

Sunday marks the 17th anniversary since the crash of the Helios airways passenger plane in the mountainous area of Grammatikos, Greece that claimed 121 lives, 22 of which were children, making it Cyprus’ worst air tragedy and the wort to have occurred on Greek soil.

A member of the committee of relatives of the victims, Sotiris Soteriades told the Cyprus News Agency on Friday that on Sunday, the day of the tragedy, a memorial service will be held at the Grammatikos chapel built in memory of those who lost their lives.

“Whole families have perished. The pain experienced by parents [of those who died] is equally intense. During these days relatives relive the 2005 tragedy. Difficult memories from the victim identification process come to mind. Many went to Athens in an effort to identify their kin but for many, it bore no fruits and was especially painful,” Soteriades said.

“No justice has been served as of yet” said Soteriades referring to the outcome of investigations, and the trial into the tragedy.

“As a result of failing to implement routine security checks at “Helios” mistakes occurred in the air, leading to the tragedy. No relative considers that blame has been assigned. The responsible individuals bought their sentence off from the Greek justice system for pennies on the dollar,” he added.

On 14 August 2005 at approximately 10.40am the Helios Airways flight 522, scheduled to travel from Cyprus to Prague via Athens, was stuck on a loop at 35,000 feet within the Athens FIR and without having made communication with the ground for more than an hour.

In a state of confusion, the Greek air force had dispatched two F-16 fighter jets to investigate. The fighter jet pilots, glancing into the passenger plane realized that the aircraft’s co-pilot was unconscious, the captain was not in position and passengers were sat motionless with the masked oxygen supply system having been activated.

A while later, an individual was seen slowly dragging themselves into the cockpit and trying to assume control, it was flight attendant Andreas Prodromou who held a UK commercial pilot licence and had managed to remain conscious using a portable oxygen supply.

Soon thereafter however, the left engine blew out due to fuel exhaustion and the plane started to descend. Ten minutes after, the right engine also blew out.  At 12.05pm the aircraft crashed into the hills near Grammatiko just 40km from Athens.

Investigators concluded that Prodromou’s experience was insufficient in gaining control of the aircraft under those circumstances but had succeeded in banking the plane away from Athens and towards a rural area in the final moments of the flight.

Of the 115 passengers, 103 were Cypriot citizens and 12 citizens of Greece.

On February 18, 2013, Nicosia criminal court acquitted all the defendants on all charges. The acquittal was brought about after the attorney-general’s office suspended criminal prosecution against all natural persons accused, and the airline company Helios.

The Athenian Court of Appeal had upheld the conviction imposed on a primary level by the three-member Misdemeanor Court with its  February 7, 2013 decision. Their sentence, 122 years in prison each, had been changed to a ten-year sentence and subsequently to a fine. After paying approximately €73,000 they were released.

Based on the principle that no one is to be tried by two countries for the same crime three out of four defendants were expected to be removed from the Cypriot indictment. The AG ruled that the prosecution should be annulled for all accused citing insurmountable difficulties in advancing the case.

Christos Petrou executive director of the Mediterranean Flight Safety Foundation (FSF Med) expressed his disappointment commenting on the fact that 17 years after the tragic event, one of the most important recommendations contained in the findings of the inquiry commission, namely the restructuring and improvement of the department of civil aviation’s institutional and supervisory frameworks has not been effectively implemented thus far, despite efforts from the transport ministry in the recent years.

Petrou further stressed that the state must immediately prepare a comprehensive ‘National Aviation Strategy’, which, in addition to the improvement and restructuring of the department of Civil Aviation, it should also include other important aspects such as the effective treatment of Turkey’s illegalities within Nicosia’s FIR, the development of the Cypriot aviation sector, regional cooperation and investment attraction among others.