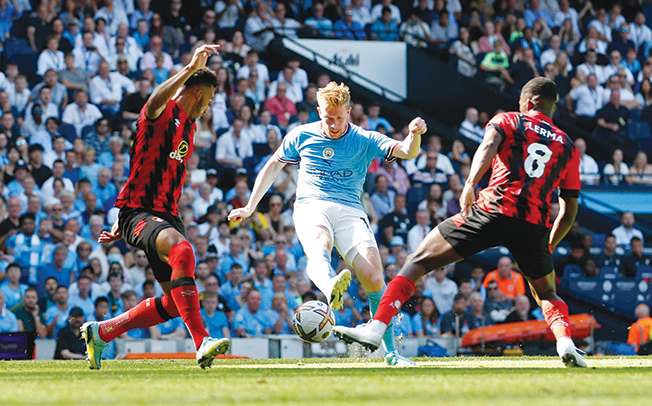 Manchester City made it two wins from two at the start of the new Premier League season after thrashing newly-promoted Bournemouth 4-0 at the Etihad Stadium on Saturday.

The champions wasted no time getting into their stride in the sunshine as Norway striker Erling Haaland marked his home debut with an assist for Ilkay Gundogan’s opener after 19 minutes.

With the first goal on the board, City cut loose and scored a sumptuous second 12 minutes later as Kevin De Bruyne curled a fine strike into the net with the outside of his foot.

Phil Foden added another before halftime from De Bruyne’s assist and it was just a matter of how many more the hosts would help themselves to.

Haaland’s moment in front of goal came late in the second half but he failed to connect properly with Jack Grealish’s pull back.

It mattered little as a late own goal from Jefferson Lerma put the icing on the cake, with City maintaining their 100% start to the new campaign at a canter.

Jesus opens Arsenal account with double in win over Leicester

Gabriel Jesus opened his Arsenal account with two goals as the London side maintained their strong start to the Premier League season with a 4-2 victory over Leicester City on Saturday.

In sizzling sunshine in north London, Brazilian forward Jesus produced a dazzling display, scoring twice before the break and going close to a hat-trick on several occasions.

On his home debut following his move from Manchester City he chipped Arsenal in front in the 23rd minute and made it 2-0 with a poacher’s close-range header in the 35th.

Leicester got a lifeline when William Saliba, also making his home debut, headed into his own net eight minutes after the break but almost immediately a mistake by Leicester keeper Danny Ward allowed Granit Xhaka to restore Arsenal’s two-goal lead.

James Maddison again gave Leicester hope when his shot went through the legs of Arsenal keeper Aaron Ramsdale but the hosts responded quickly with Gabriel Martinelli finding the bottom corner from an assist by Jesus.

It was a vibrant performance by Mikel Arteta’s Arsenal side who have six points from their opening two games.

Brighton & Hove Albion were thwarted by two goal-line clearances as they were held to a 0-0 draw by Newcastle United in their Premier League clash at a sun-drenched Amex Stadium on Saturday.

With temperatures soaring to more than 30 degrees Celsius on England’s south coast, the game got off to a flying start as Brighton pinned back the visitors for the first 10 minutes before Newcastle started to hit back with lightning-quick counter attacks.

Solli March looked to have given Brighton the lead in the 33rd minute but fullback Kieran Trippier was on hand to clear the ball off the line, with replays showing that most of the ball was over the line.

Goalkeeper Nick Pope made a brilliant save early in the second half, clawing away Adam Lallana’s header after Brighton’s attacking midfielder was left unmarked in the box.

Tempers boiled over in the 57th minute though, as Joelinton and Solli March got involved in a shoving match down by the corner flag, with both players getting shown the yellow card.

The water break shortly afterwards – introduced this weekend due to scorching temperatures – was well-earned following a goalmouth scramble that saw Brighton go close, only for Newcastle to zip up the other end on the counter in a move stopped by a last-ditch tackle on Miguel Almiron.

Newcastle continued to threaten on the break and from set pieces, but it was Brighton who went closest to breaking the deadlock, forcing a number of saves from Pope and a goal-line clearance from Fabian Schaer as the game finished scoreless.

After winning their opening league fixtures last weekend, the draw leaves both sides on four points.

Wolverhampton Wanderers and Fulham will have to wait for their first Premier League win of the season after playing out a goalless draw on Saturday as Aleksander Mitrovic’s second-half penalty for Fulham was saved by Jose Sa.

The visitors were awarded a spot-kick with 20 minutes remaining after Rayan Ait-Nouri fouled Bobby Decordova-Reid but Wolves goalkeeper Sa saved Mitrovic’s effort to earn the hosts a point at Molineux.

Wolves made a lively start and caught Fulham on the break twice in the early stages. The visitors had goalkeeper Marek Rodak to thank for denying Pedro Neto and Hwang Hee-chan from tight angles.

Decordova-Reid had Fulham’s first chance after 20 minutes but his header from Andreas Pereira’s corner was cleared off the line by Wolves captain Ruben Neves.

A poor mix-up between Rodak and defender Tosin Adarabioyo gifted Neto a golden chance but the winger could not convert. The ball fell to Daniel Podence, who struck it across goal in another huge let-off for Fulham.

New Wolves signing Goncalo Guedes replaced Hwang just before the hour while Adama Traore came on for Neto after 78 minutes as manager Bruno Lage’s side looked to push for a winner but Hwang’s early attempt remained their only shot on target in the match.