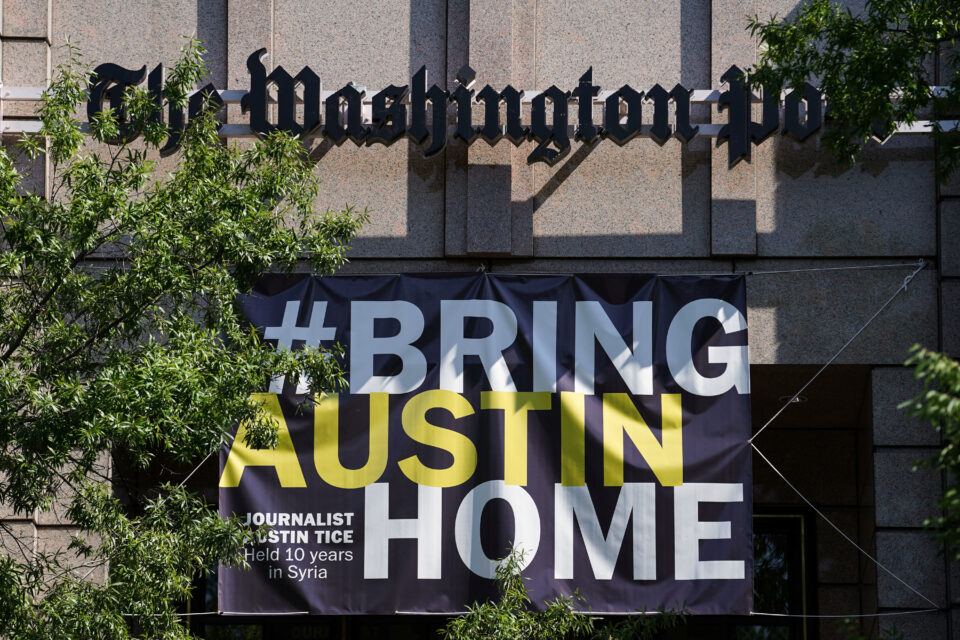 A #BringAustinHome" banner, honoring freelance journalist Austin Tice who was abducted in Syria in 2012, hangs outside of The Washington Post headquarters in Washington, D.C., U.S., Aug. 9, 2022. REUTERS/Sarah Silbiger

Syria’s government on Wednesday denied kidnapping or holding a U.S. journalist who disappeared a decade ago, a week after President Joe Biden demanded that Damascus let him go home.

Austin Tice, a former U.S. Marine and a freelance journalist, was kidnapped in August 2012 aged 31 while reporting in Damascus on the uprising against Syrian President Bashar al-Assad.

His family believes he is alive and still being held in Syria. The identity of Tice’s captors is not known, and there has been no claim of responsibility for his abduction.

On Wednesday, the Syrian Foreign Ministry described Tice as a U.S. serviceman and denied the government was holding him or any other U.S. citizen.

“These are baseless allegations,” the statement said.

Last week, Biden issued a statement marking the 10th anniversary of Tice’s captivity, and said Washington knew “with certainty” that Tice has been held by the Syrian government.

He added that his administration had “repeatedly asked the government of Syria to work with us so that we can bring Austin home”.

On Wednesday, U.S. State Department spokesperson Ned Price, in a daily briefing, said the Syrian government’s denial did not change the fundamental U.S. position since Damascus had never acknowledged holding Tice, either publicly or in private contacts.

Asked if Washington could say with certainty whether Tice was still in the custody of the Syrian government, Price said: “We believe, to this very day, that Syria still has the power to release Austin Tice. That is why we are calling on the Syrian regime to do just that.”

Washington suspended its diplomatic presence in Syria in 2012 at the onset the country’s civil war.

Biden met Tice’s parents at the White House in early May and told them he would work “relentlessly” until his return was secured. Efforts to secure his release appeared to have picked up since then.

In June, Lebanon’s intelligence chief, Major General Abbas Ibrahim, said U.S. officials wanted him to resume efforts to bring Tice home and that he would visit Syria for talks on the issue.

In an interview with General Security magazine, his agency’s official publication, Ibrahim said that in past talks with Damascus on Tice, Syria had raised demands related to the withdrawal of U.S. forces, a resumption of diplomatic relations and the lifting of some U.S. sanctions.

The families of hostages and detainees have begun to collectively raise their voices to urge Biden to prioritise the issue and take steps such as arranging further prisoner swaps with foreign governments.