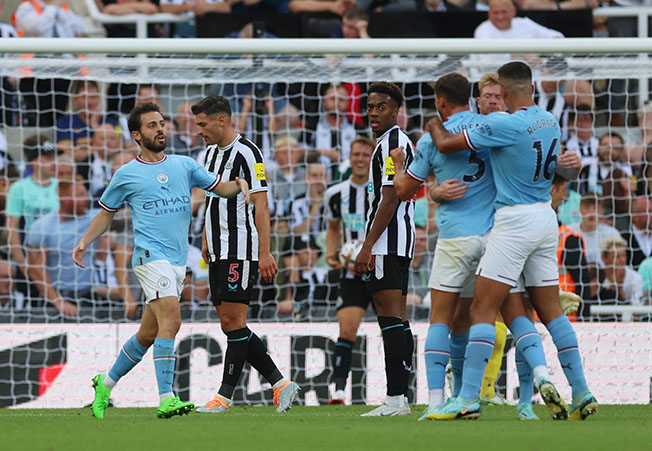 Quickfire goals by Erling Haaland and Bernardo Silva helped Manchester City recover from two goals down to draw 3-3 with Newcastle United in a rip-roaring Premier League clash at St James’ Park on Sunday.

Neither side had conceded a goal in the league this season but Ilkay Gundogan opened the scoring for champions City in the fifth minute, ghosting in and catching the Newcastle defence flat-footed before finishing from close range.

City should have gone two up in the 16th minute when Phil Foden attacked down the right, but he chose to shoot from a tight angle rather than squaring the ball to Haaland and the chance was wasted.

The home side levelled through Miguel Almiron in the 28th minute as he bundled a pinpoint cross from Allan Saint-Maximin into the net before enduring a nervous VAR check that allowed the goal to stand.

Saint-Maximin tormented City full back Kyle Walker and he put Newcastle in position to pull off a huge upset when he set up Callum Wilson to make it 2-1 before halftime.

A brilliant free kick by Kieran Trippier nine minutes after the break put them 3-1 ahead.

That sparked City into life, however, with Haaland hitting a post before pulling a goal back on the hour mark and Silva converted a glorious pass from Kevin De Bruyne to make it 3-3.

Newcastle’s challenge looked set to come unstuck when Trippier was shown a straight red card for a cynical high trip on De Bruyne, but after a VAR review the decision was overturned and he was given a yellow.

City dominated possession in the final stages but had to settle for a draw that left them second in the table on seven points, two behind leaders Arsenal. Newcastle are sixth on five points.

“We scored the third goal in the 64th minute, it was very early. I’m a bit disappointed we didn’t score the fourth, but still, a good reaction from the team,” Silva told the BBC.

Trippier was disappointed his side only came away with a point.

“We want to go toe to toe with them and I thought we did that throughout the match, but Man City are a top side and they have the quality of the players to get themselves back into the game,” he told Sky Sports.

Leeds United continued to impress under American coach Jesse Marsch after a relentless display earned them a 3-0 Premier League victory over Chelsea, who finished with 10 men, on Sunday.

In a raucous Elland Road atmosphere, two goals in five first-half minutes saw the hosts race into a 2-0 lead with Chelsea unable to cope with the intensity.

The opener came after a monumental error from away goalkeeper Edouard Mendy, allowing American Brenden Aaronson in to score his first Premier League goal on 33 minutes, before Rodrigo headed in his fourth of the season to make it two.

There was no letting up from Leeds as they put the game to bed with a 69th-minute third through Jack Harrison, before Chelsea’s close-season signing Kalidou Koulibaly was sent off late on.

A second victory from three at the start of the new campaign came at a canter from there on in, helping Leeds climb up to second in the standings, while Chelsea’s first loss leaves them down in 12th.

Brighton & Hove Albion maintained their impressive start to the Premier League season and piled on the misery for West Ham United with a 2-0 victory at the London Stadium on Sunday.

Graham Potter’s well-drilled side sealed a thoroughly deserved three points in the 66th minute when Leandro Trossard raced through to score after a slick move.

West Ham did not manage a shot on target in the first half but tried to respond late on with Tomas Soucek forcing a couple of fine saves from Brighton keeper Robert Sanchez.