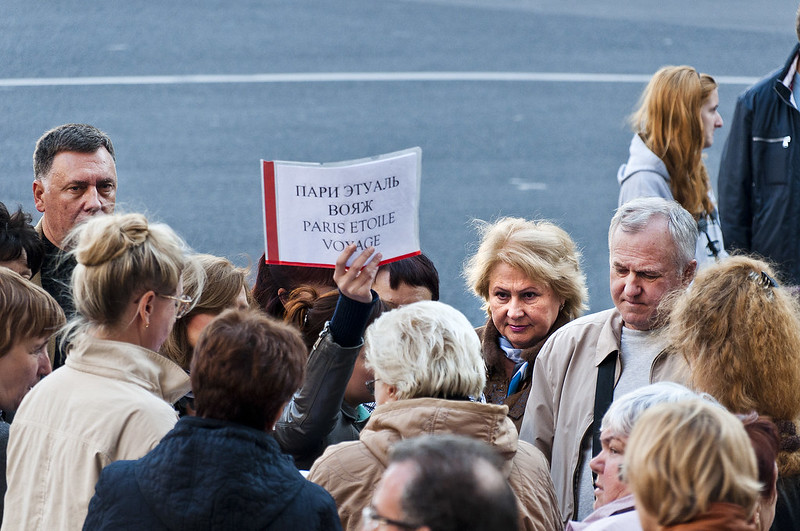 File photo: The Czechs are pushing for an EU-wide ban on visas for Russian tourists (Image: Lars Lundquist)

European Union foreign ministers, meeting in Prague on Tuesday and Wednesday, may agree tightening the issuance of visas for Russians and start debate on a wider ban on tourist visas though there is no agreement on that, EU officials said.

The six-month-old war in Ukraine remains a foreign policy priority for the European Union and a visa ban for Russians pushed by some mainly eastern member states will be at the top of the agenda.

The bloc’s defence ministers, also meeting in Prague on Monday and Tuesday, will also discuss options for setting up an EU military training mission for Ukraine.

Several EU countries have been training Ukrainian troops for a while, mainly enabling them to operate weapons Western nations are delivering to Ukraine to help its fight against Russia’s invasion.

It is not clear yet where an EU training programme could be based and what mandate it might have, EU diplomats told Reuters ahead of the defence ministers’ meeting.

At a joint session with U.N. and NATO representatives, defence ministers will also discuss the future of the EU’s suspended training mission in Mali and the U.N peacekeeping force MINUSMA, as concerns grow over an increasing Russian presence in the West African country.

An EU diplomatic source said on Monday that the foreign ministers may agree in principle on suspending a visa facilitation agreement with Russia, which would mean Russians would pay 80 euros instead of 35 for EU visas, and also face a more lengthy procedure.

“The result of Gymnich (foreign ministers’ meeting) will probably not be an agreement to widen sanctions by including visas,” the source told reporters.

“But (suspension of) the facilitation agreement will be the first step, and we will talk about how to include visas in the sanctions.”

The Czechs, who hold the EU’s rotating presidency, have themselves stopped issuing regular visas to Russians and have pushed for an EU-wide ban on visas for Russian tourists, an idea supported mainly by the Baltic countries.

However, Germany, some other member states and the bloc’s foreign policy and security chief, Josep Borrell, have opposed such a move, arguing it might breach EU rules and cut off escape routes for Russian dissidents.

“I don’t think that to cut the relationship with the Russian civilian population will help and I don’t think that this idea will have the required unanimity,” Borrell, who chairs EU foreign ministers’ meetings, told the Austrian national broadcaster late on Sunday.

The EU source said there may be further discussions on how to slap sanctions on visas and that there may be exceptions for family members, civil society representatives or students.

Lithuanian Foreign Minister Gabrielius Landsbergis has said Estonia, Latvia, Lithuania, Poland and Finland, which all share a border with Russia, may act on their own to block tourists if the EU does not agree on a union-wide ban.

Russians mostly enter the EU via the land borders of the five countries since direct flights between Russia and the bloc were suspended following Moscow’s invasion of Ukraine, according to Landsbergis.

In mid-August, Estonia closed its border to more than 50,000 Russians with previously issued visas, the first country in the EU to do so.

Ukrainian President Volodymyr Zelenskiy called on the West earlier this month to impose a blanket travel ban on Russians, drawing an angry rebuke from Moscow.

The good, the bad, and the insane

Influencers who are pioneering the world’s most important innovations