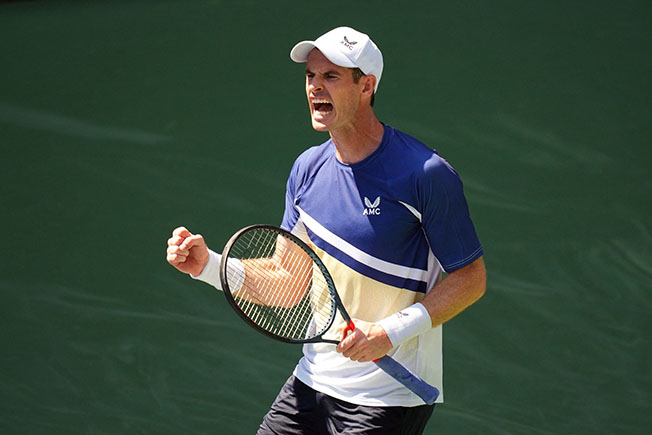 Former world number one Andy Murray, who claimed the first of his three major titles in New York, went through in straight sets

Andy Murray powered into the second round of the U.S. Open with a comfortable 7-5 6-3 6-3 win over Argentine Francisco Cerundolo on Monday, as the former world number one rolled back the years at the scene of his first Grand Slam triumph a decade ago.

The 35-year-old Scot, who has battled various injuries in recent years, raced to a 5-2 lead early in the match but dropped his level slightly before edging a tight first set and breaking quickly in the next to put 24th seed Cerundolo under pressure.

Murray staved off a comeback attempt by Cerundolo to take the second set for a commanding lead and showed little signs of stepping off the gas pedal, as his opponent continued to make life difficult for himself with unforced errors.

A double break in the third set allowed twice Wimbledon champion Murray to surge ahead 4-1 and he sealed the win when Cerundolo sent a return long. Murray faces Australian John Millman or American Emilio Nava in the second round.

The Russian had an inconsistent run-up to Flushing Meadows but was back to top form on the court where he won his maiden Grand Slam title a year ago, sending across 10 aces and neutralising Kozlov’s serve.

“Most pleased to win first of all… not easy conditions,” said Medvedev, who repeatedly wrapped an ice towel around his neck to keep cool in the humid, 85-degree Fahrenheit (29.4 Celsius) conditions. “Serve was quite the key today.”

The pair traded breaks early in the first set before Medvedev got his motor running, clinching the next four games as Kozlov won fewer than half of his first-serve points.

Kozlov was no match for Medvedev’s raw power in the second set. The American scraped his wrist and knee after he dived to retrieve the ball, but ended up falling to the ground heavily in the ninth game that saw Medvedev break him to love.

He called on the trainer to tend to the injuries but Medvedev showed no mercy as he raced through the final set like a bullet train in just 27 minutes to set up a meeting with Frenchman Arthur Rinderknech in the second round.

Highlights of the first day at the U.S. Open, the last Grand Slam tournament of the year, at Flushing Meadows on Monday (times GMT):

Daria Snigur claimed one of the biggest victories of her fledgling career when the 20-year-old beat Simona Halep, 117 rungs above her in the rankings, 6-2 0-6 6-4 in the first round on her Grand Slam main draw debut.

1858 BERRETTINI THROUGH TO SECOND ROUND

Matteo Berrettini beat Nicolas Jarry 6-2 6-3 6-3, becoming the Italian player with the most main draw wins at Flushing Meadows with 13 victories.

Yibing Wu became the first man from China in 63 years to win a Grand Slam singles match when he beat Nikoloz Basilashvili 6-3 6-4 6-0.

American Tommy Paul came from behind twice to beat Spain’s Bernabe Zapata Miralles 4-6 6-3 2-6 6-0 7-5 in what was the first five-setter of the tournament and his first career win at his home Grand Slam.

Third seed Maria Sakkari overcame a wobble to beat Tatjana Maria 6-4 3-6 6-0 and gain revenge against the German who upset her en route to the Wimbledon semi-finals this year.

Also reaching the second round were Caroline Garcia who beat Kamilla Rakhimova 6-2 6-4 and Veronika Kudermetova after her 7-5 6-3 victory over Donna Vekic.