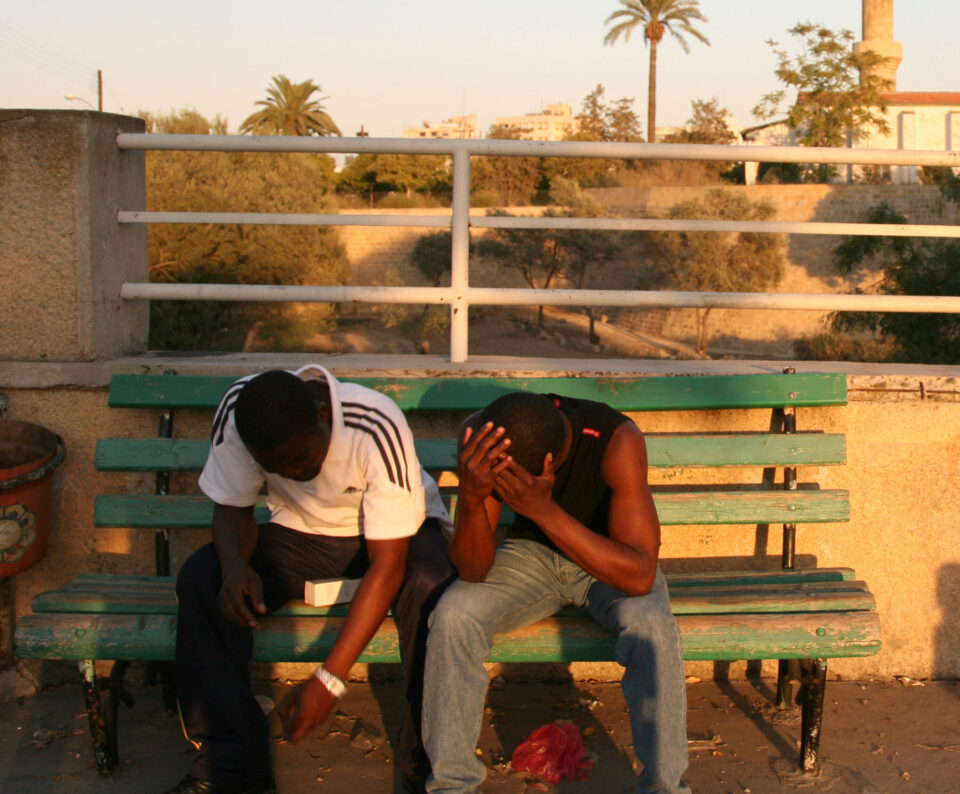 African-born asylum seekers, who do not wish to be identified, sit on a bench on a bridge in central Nicosia, 18 September 2007

Many suspicious deaths of Nigerians, have been warned against going to north

The Nigerian Federal Government has advised Nigerians against going to the northern part of Cyprus because of the killings and continued mysterious deaths of black university students in the country.

More than 100 Nigerian university students have been killed there in recent years. While some were obvious murder victims, many others were also suspicious.

“Please tell everybody to stop going to northern Cyprus,” said Abike Dabiri Erewa, chairman of the Nigerian government’s diaspora commission NiDCOM, during a press briefing at the State House in capital Abuja earlier this week. “Students are being killed on a daily basis, and nothing is happening. If you are going to northern Cyprus, think twice about it.”

During the briefing, Erewa underlined the difficulty of employing international diplomacy in investigating the deaths, as the northern part of Cyprus is only recognised by Turkey.

Just in the last couple of years, the body of 33-year-old Obasanje Adeola Owoyalr was found in the boot of a car in central Nicosia. He had been beaten and stabbed to death, bound, wrapped in a blanket and left to rot. Twenty-five-year-old Walshak Augustine Ngok was beaten to death and dumped in a field off a highway near Nicosia. Twenty-eight-year-old Nigerian Kennedy Taomwabwa Dede was kidnapped and beaten to death near a lake in Famagusta.

Besides brutal murders, many other Nigerian students in the north have died in recent years falling off balconies and roofs under suspicious conditions or have been found dead in their rooms. The suspicious deaths are usually dubbed “accident” or “suicide” and the case is closed without further investigation.

According to commentators, the problem arises from the higher education policy, which could be summarised as ‘opening as many universities as possible and attracting as many foreign students as possible.’ The higher education sector, which is one of the engines of the Turkish Cypriot economy, has grown in an uncontrolled fashion in the last decade as one university after another opened its doors to a flood of overseas students.

On this “education island” – as the northern Cyprus is advertised in African and Central Asian countries – there currently are about 110,000 university students in 22 universities. Some 51,000 of these students are coming from third countries, mostly Nigeria.

The lucrativeness of the business, coupled with the ease with which student visas are issued have boosted the foreign student numbers, but also the problems.

A recent study on foreign university students by The Centre for Migration, Identity and Rights Studies (CMIRS) shows that African students are usually deceived into coming by agents or middlemen, who themselves were formerly studying there.

“Agents, who themselves have been students here, and who are called ‘mama,’ deceive students with false promises of schools and jobs,” CMIRS director Mine Yücel explains. “The students are told they would be going to an EU member state, that they will have job opportunities and make a lot of money in euros. They are made to pay for their tickets and rent upfront, and they end up coming here already indebted.”

More often than not, the African students fall into the hands of criminal groups as a result of financial hardship.

“Usually, the students, who come here, are poor students, who cannot afford to go to Europe or America,” Yücel says. “These students usually spend all their family’s savings to come here. In a short time, they realise that the scholarships or jobs promised to them were false, that life is expensive, and that they cannot survive here unless they (sometimes illegally) make money. This leads them to fall into the hands of criminal groups,” which leaves them exposed to violence and killings.

In some cases, ‘mama’ seizes the students’ passports on their arrival and instead of being taken to school, they are taken to villas, where they are forced into prostitution, according to Yücel. “Those, who do not comply, are threatened blackmailed and subjected to physical violence,” she says.

Depression, anxiety and suicidal thoughts are widespread among Nigerian students, according to the CMIRS findings. Last April, there were two suicides and two attempted suicides by Nigerian students in the same 24 hours.

In fact, the ease with which student visas can be acquired in the northern part of Cyprus has turned the country into a human trafficking “heaven”.

Last month, a Turkish rights group and the Nigerian National Agency for the Prohibition of Trafficking in Persons (NAPTIP), published a communique over the “mass trafficking” of young Nigerians, mostly females to the north, which they call a “heaven for the traffickers who operate unrestrained”. According to this communique, a human trafficking syndicate is believed to be operating between the northern part of Cyprus and Nigeria, which promises girls and young men non-existent scholarships and work opportunities.

“Students can receive visas mostly with just a proof of university registration,” the communique explains. “It has been understood that the human traffickers have been abusing this procedure.”

Human trafficking through universities was also mentioned by the US State Department’s Trafficking In Persons Report in 2022. The report explains that the foreign university students – mostly from African countries – come to northern Cyprus usually on false promises of scholarships, free housing and employment. These students, who enter on student visas, “are vulnerable to both sex and labour trafficking”, the report says. “Traffickers force female students into sex trafficking in apartments and male students into forced labour or coerce students to commit crimes such as transporting or selling drugs.”

Yücel confirms that through their research, they have identified nine human trafficking victims just between January-April 2022. The human trafficking activities are mostly carried out by Nigerian student groups called cults. These secret groups are banned in Nigeria and hundreds of members have been arrested and prosecuted over the years. These cults have been accused of being behind serious violence, including killings, at universities.

It is not surprising that in a place where vulnerabilities are exploited by malicious or criminal circles, so many students are forced into illegal activities, and necessary control and protection mechanisms are not in place, many Nigerian students are being murdered or losing their lives under questionable circumstances, according to commentators.

On the other side of the coin are the wealthy Nigerians who visibly live a very luxurious life driving expensive cars and entertaining in posh clubs and restaurants in the north.

Yücel highlights that easy-to-get student visas and lack of controls or supervision over whether individuals entering on a student visa are indeed going to school, in some cases are being used as a way to legitimise illegal dealings. Among those Africans, who arrive in Cyprus on a student visa, are some criminals and who, after registering in a university for just one semester, engage in all kinds of illegal activities such as money laundering. Almost weekly, there are reports in the Turkish Cypriot newspapers and news sites about Nigerian students being arrested for money laundering.

“Today, many illegal activities including money laundering are carried out by Nigerians, who have come into the country on student visas, but who have nothing to do with the schools here,” underlines Yücel. “These people are spending lavishly and laundering serious amounts of money in this country.”

Yücel explains that the problems can only be solved if both the authorities and the universities take strict measures and exercise strict controls on who are entering the country with student visas, whether they actually are attending schools and what they are doing here.

“The reality here is that once they get the tuition, the universities don’t care what the students are doing in the country,” she says. “Universities see students as a mere source of income and even those, who are in the country to commit crimes, don’t face any problems as long as they pay their tuition. Universities and authorities should take responsibility in cleaning this mess.”

Our View: There needs to be collective political will to clean up politics