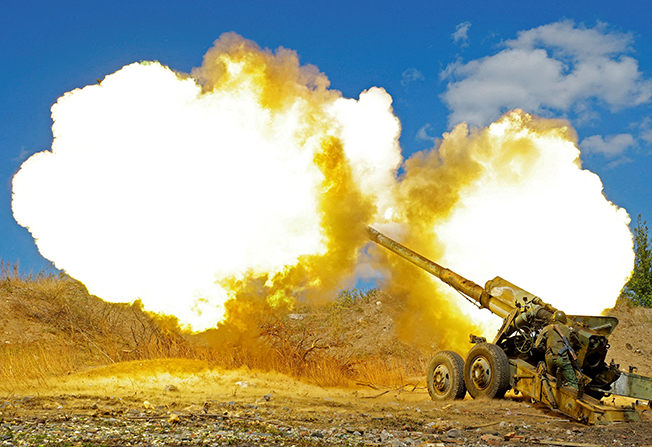 A Giatsint-B howitzer is fired outside Donetsk

Russian state television broadcast an interview on Friday acknowledging that Kyiv had achieved a “substantial victory”, after Ukrainian forces burst through the frontline in a lightning advance.

The Ukrainian breakthrough near Kharkiv was the fastest advance reported by either side for months, and one of the biggest shifts in the war’s momentum since Russian forces abandoned a disastrous assault on the capital Kyiv in March.

Ukrainian President Volodymyr Zelenskiy said troops had “liberated dozens of settlements” and reclaimed more than 1,000 square km (385 square miles) of territory in Kharkiv region in the east as well as Kherson in the south in the past week.

Western military analysts say the advance puts the Ukrainians within striking distance of the main railway Moscow has relied on to sustain its force in eastern Ukraine, and could leave thousands of Russian troops at risk of being cut off.

After a day of providing little or no response, Russia’s defence ministry released video of its troops being rushed to reinforce the area.

“The very fact of a breach of our defences is already a substantial victory for the Ukrainian armed forces,” Russian state TV showed the head of the Russian-installed occupation administration for Kharkiv province, Vitaly Ganchev, saying in an interview. Russian law bans all reporting of the conflict that diverges from official accounts.

Zelenskiy posted a video of Ukrainian soldiers announcing they had captured the eastern town of Balakliia, along a stretch of front stretching south of Kharkiv, Ukraine’s second largest city. The Ukrainian military said it had advanced nearly 50 km through that front after an assault that appeared to take the Russians by surprise.

The Kremlin declined to comment on the advance and referred questions to the Russian military.

Such rapid advances have largely been unheard of since Russia abandoned its assault on Kyiv in March, shifting the war mainly into a relentless grind along entrenched front lines.

Ukraine has not allowed independent journalists into the area to confirm the extent its advances, but Ukrainian news websites have shown pictures of troops cheering from armoured vehicles as they roar past street signs bearing the names of previously Russian-held towns.

“We see success in Kherson now, we see some success in Kharkiv and so that is very, very encouraging,” U.S. Defense Secretary Lloyd Austin told a news conference with his Czech counterpart in Prague.

The Institute for the Study of War think tank said the Ukrainians were now within just 15 km of Kupiansk, a junction for the main railway lines that Moscow has relied on to supply its forces on the battlefields in the east.

Moscow has long used its firepower advantage to make slow advances by bombarding towns and villages. But that tactic depends on tonnes of ammunition a day reaching the front line by train from western Russia.

“Thanks to skilful and coordinated actions, the Armed Forces of Ukraine, with the support of the local population, advanced almost 50 km in three days.”

Kyrylo Tymoshenko, a senior Zelenskiy aide, posted a photo showing a Ukrainian soldier posing with a bound and blindfolded prisoner in civilian clothes. Tymoshenko identified the prisoner as the captured head of the Russian-installed administration of Ivanivka, a village deep in territory previously held by Russia.

Tens of thousands of people have been killed, millions have been driven from their homes and Russian forces have destroyed entire cities since Moscow launched what it calls a “special military operation” in February to “disarm” Ukraine. Russia denies intentionally targeting civilians.

In the latest reported strike on civilians, Ukrainian officials said Russia had fired across the border hitting a hospital in the northeastern Sumy region on Friday morning, destroying the building and wounding people. Reuters could not independently confirm the report.

The centre of Kharkiv, which has been regularly bombarded by Russia, was hit by Russian rocket fire, wounding ten people, including three children, Governor Oleh Synehubov said. Rockets hit a children’s arts centre and a school, as well as private homes, mayor Ihor Terekhov wrote on Telegram.

The surprise Ukrainian breakthrough in the east came a week after Kyiv announced the start of a long-awaited counter-offensive hundreds of km away at the other end of the front line, in Kherson province in the south.

Ukrainian officials say Russia moved thousands of troops south to respond to the Kherson advance, leaving other parts of the front line exposed and creating the opportunity for the lightning assault.

“We found a weak spot where the enemy wasn’t ready,” presidential adviser Oleksiy Arestovych said in a video posted on YouTube.

Less information so far has emerged about the campaign in the south, with Ukraine keeping journalists away and releasing few details.

Ukraine has been using new Western-supplied artillery and rockets to hit Russian rear positions there, with the aim of trapping thousands of Russian troops on the west bank of the wide Dnipro River and cutting them off from supplies.

Arestovych acknowledged progress in the south had not yet been as swift as the sudden breakthrough in the east.

Russia’s state news agency RIA quoted Russian-appointed Kherson authorities as saying some Ukrainian troops were captured during the counterattack and some Polish tanks they were using were destroyed. Reuters could not verify those reports.

Over 70 animals, mostly goats, killed by pack of stray dogs