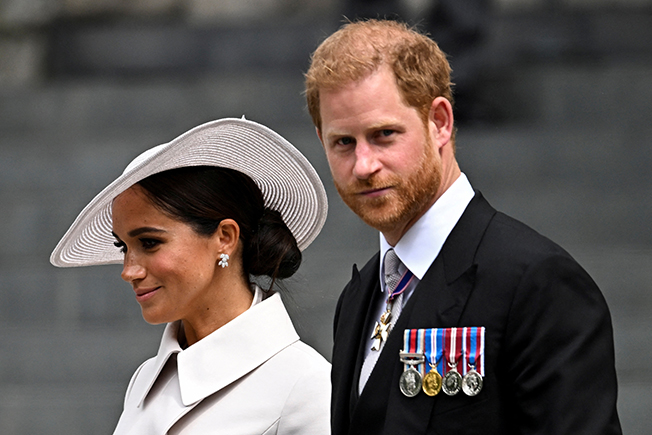 How the royals deal with Harry, Meghan and their children will be a key theme of the post-Elizabeth era

Just before boarding a flight at Aberdeen on Friday, the morning after the death of his grandmother Queen Elizabeth, Prince Harry put his arm around the shoulder of an airport worker who had expressed her sympathy while accompanying him across the tarmac.

It was a moment of warmth and informality characteristic of Harry, whose approachable persona long made him one of the most popular royals – until his decision to step back from royal duties caused a breach in the family that is far from resolved.

Harry was the last to arrive at Balmoral Castle on Thursday, as the queen’s closest relatives rushed to be with her in her final hours, and the first to depart on Friday, reflecting the fact that he is no longer part of the family’s inner circle.

In happier times, Harry and his grandmother enjoyed a close, playful rapport, glimpsed by the wider public in 2016 when they appeared together in a comic video, reacting to a mic drop taunt from Barack and Michelle Obama ahead of the Invictus Games, a competition for disabled veterans which Harry has promoted.

But it was pure coincidence that Harry was in Britain when Elizabeth died, and prior to her demise there were no plans announced for him to see his family during his visit from the United States, where he lives with his American wife Meghan.

With the matriarch gone, family dynamics are bound to evolve, and as the pomp and ceremony of Elizabeth’s funeral unfold observers will be watching closely for signs of detente.

How the royals deal with Harry, Meghan and their children will be a key theme of the post-Elizabeth era – one of the family dramas that have made the House of Windsor an enduring object of global fascination.

The new King Charles signalled a desire for a thaw in relations during his first speech as sovereign on Friday.

“I want also to express my love for Harry and Meghan as they continue to build their lives overseas,” he said.

Under royal rules, the monarch’s grandchildren automatically become princes or princesses of the realm, so now that Harry’s father Charles is king, his children, Archie, 3, and Lilibet, 1, receive those lofty titles. Lilibet was named after the queen’s childhood nickname.

But that novelty alone is unlikely to restore harmony in Harry’s relationships with Charles or with elder brother Prince William, now the heir to the throne.

The brothers were close for many years after the death of their mother Diana in a car crash in 1997, when William was 15 and Harry was 12, but their bond has been strained since Harry and Meghan began distancing themselves in January 2020.

Initially, the couple said they planned to balance their time between Britain and the United States and carve out “a progressive new role” within the monarchy.

But their plan did not wash with Elizabeth, Charles or William, who ruled that there was no space in the Firm, as the royal family is sometimes called, for part-timers.

Instead, the couple moved full-time to California and, after a 12-month review period, relinquished their royal patronages and permanently left the exclusive club of those addressed as “Your Royal Highness”.

In March 2021, they gave a bombshell interview to Oprah Winfrey during which Meghan said her unhappiness during her time as a working royal had pushed her to the brink of suicide.

She also said there had been “concerns and conversations” within the family when she was pregnant with Archie about what colour the baby’s skin would be. Meghan’s mother is Black and her father is white.

The interview, aired on CBS in a blaze of global publicity, generated acres of newsprint but only a terse statement from Buckingham Palace which said icily that “some recollections may vary” though the issues raised were “concerning”.

Since then, Harry and Meghan have engaged in projects such as podcasts and TV programmes, while suing British tabloids, some of which have kept up a constant barrage of anti-Meghan stories.

Publisher Penguin Random House announced in July 2021 that Harry was working on an “intimate and heartfelt” book about his life, to be published in late 2022 — sending shivers of dread down royal spines in London.

Depending on its contents, and crucially on the reaction from his father and brother, the publication of Harry’s book could prove to be either a moment of healing or another grievance for the two sides to hold against each other.