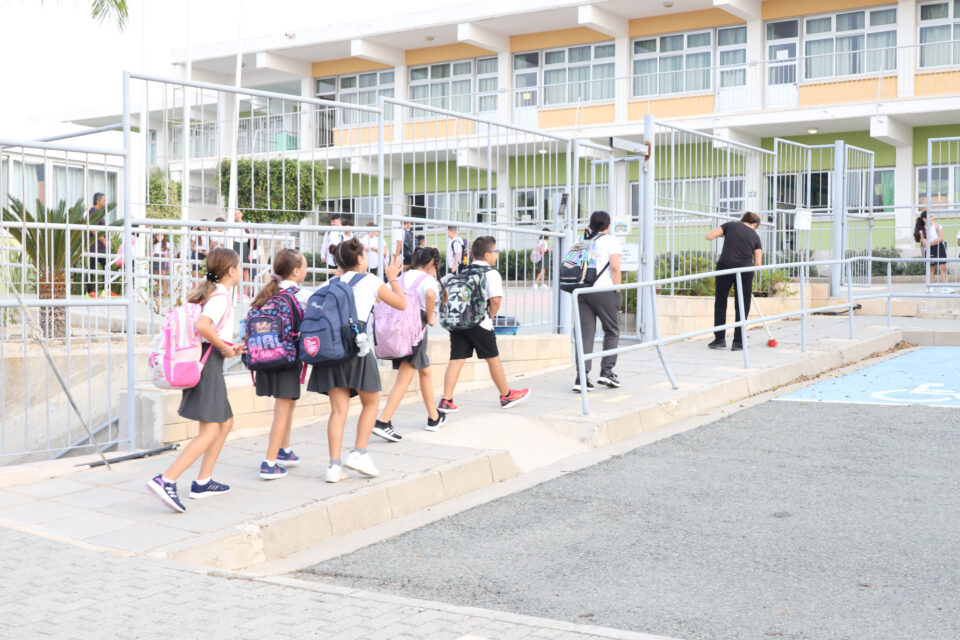 Over 60,000 primary pupils started school on Monday and were welcomed by Education Minister Prodromos Prodromou, who said he was happy that the school year can start without the protocols and safety measures for the pandemic.

Speaking at the First Primary School of Makedonitissa in Nicosia, he added that staffing is complete at the schools and that all the books have been received by the schools.

In total 50,038 children will attend public primary school, another 12,803 will go to public nursery schools, and 537 students will attend special education facilities.

Prodromou said special importance would be given to migrant students, whose history is being studied in detail. He requested patience from parents regarding assistants that accompany students with special needs, as the problem would be solved soon.

Commenting on programmes to integrate migrant children fully and the programme ‘Drase’, the minister said that there will be a total of 170 schools taking part year. ‘Leme Ohi’ (we say no) a sexual education programme will also be expanded to more schools this year.

Speaking to Alpha News in the morning, Poed Chairwoman Myria Vasiliou said that there were some problems with the start of schools.  In one case, students from four families in rural areas of Limassol missed the registration deadline for their nearest school and would have to go to a school that is 30-40 minutes away.

Regarding the integration programmes, Vasiliou said that these created a double standard in terms of employment, as some schools will be fully staffed with permanent teachers, while 110 schools will be staffed by contract teachers.

Commenting on staffing, Director of Primary Education at the Ministry, Marios Stylianides said reports of a delay in staffing schools were ‘exaggerated’ as after the students’ registrations were completed in April, the data was given to the Education Service Commission, which in turn proceeded to staff the schools.

“Some issues arose because some parents requested to transfer their children at the last minute,” he said.

Regarding the goals set for the new school year, he said that guidelines and written instructions have already been given. The core, he added, was to improve learning outcomes and skills.

The pillars on which the implementation of the plan will be based are related, among others, to students with a migrant background, to students at risk of illiteracy, to Special Schools, and to modern teaching methods.

Stylianides said that staffing shortages were being recorded by the district offices and if deemed necessary, appropriate corrective actions would be taken. Regarding the issue of air conditioners in classes, about which Poed constantly complains, he said that there was a five-year implementation plan in place.

The day before schools started, public kindergarten teachers blasted the education ministry for ignoring a number of issues they said had made the start of the new school year very difficult.

“Despite the input from teachers, fully documented in their entirety, about the need to support public kindergartens, ministry of education turns its face away from the problems that its polices have created and leaves the schools burdened with difficulties,” the independent movement of kindergarten teachers Akida said.

Akida said the education ministry refused to appoint the necessary auxiliary staff for cleaning and supporting the operation of the school, and appointing the necessary number of assistants for children with disabilities.