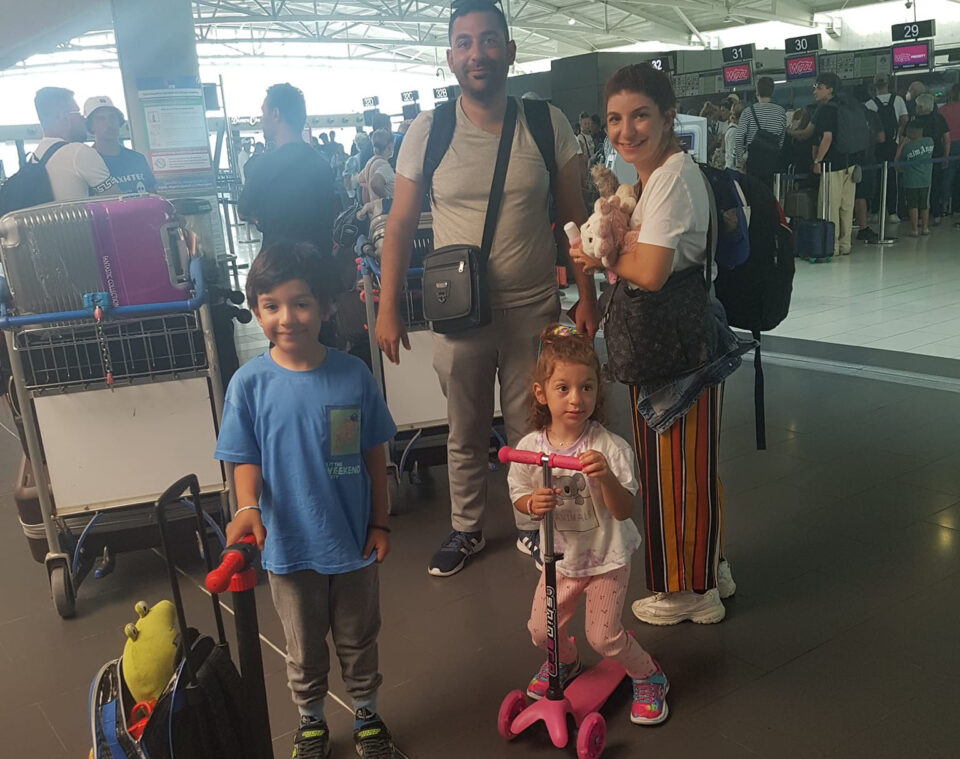 Omer Nasit and his family leaving the island

“From now on, the struggle for life for us, will continue under different conditions in a different geography. Goodbye…” So posted Turkish Cypriot Ömer Naşit on social media from the Larnaca airport earlier this month, as he was leaving Cyprus for good with his family.

It is currently not uncommon to see young Turkish Cypriots announce to their friends on social media that they are leaving to seek a future elsewhere. Although there are no statistics on how many have recently left Cyprus, or moved to the south of the island, it would be safe to say that everyone knows at least someone, who has left or is planning to leave.

Suffocating economic, social and political problems are behind most people’s decision to leave.

And, according to a survey conducted by The Centre for Migration, Identity and Rights Studies (CMIRS) conducted among 500 people this month, a disconcerting 35 per cent of Turkish Cypriots said they would move to another country if they had the chance.

In the CMIRS survey, which is repeated every three months, and which also measures political confidence, social confidence, individual confidence and sense of happiness among Turkish Cypriots, as well as how these are affected by current developments, a whopping 94 per cent said things are not going well in the northern part of the island.

From the time the three-monthly surveys started in 2013, the percentage of people who think that things are not going well has reached record levels, according to CMIRS Director Mine Yücel. She said that only about 20 per cent of Turkish Cypriots say they have confidence in the future.

“This is very alarming for society,” Yücel added. “It is clear that a society that has no confidence or hope in the future is going through a serious depression, and that this will lead to serious social problems.”

According to survey findings, Turkish Cypriots think the biggest problem is economy and inflation. Only seven per cent of those surveyed said their economic situation was good.

The survey also showed that the economic expectations of Turkish Cypriots are worse than they have ever been in the past.

“People are very pessimistic regarding their own financial situation and the country’s economic situation,” Yücel said.

The Turkish Cypriot economy has been in free-fall in recent months as the Turkish lira has plummeted because of the interest-rate cutting policies of Turkish President Recep Tayyip Erdogan. The lira lost 44 per cent of its value in 2021 alone. It has shed a further 22 per cent this year.

The fall in the value of the Turkish lira has led to soaring prices in the northern part of the island, where the economy is dependent on imports. The annual inflation rate reached 118 per cent in August, with the prices of especially fuel and electricity mounting. Although the official currency in the north is the Turkish lira and people’s salaries are also paid in lira, many expenses like rent and school fees are in foreign currencies, which exacerbates the situation.

The dire living conditions and economic hardship sent Turkish Cypriots out on the streets in their thousands in July in a demonstration supported by trade unions, political parties and civil society organisations that saw crowds protest “social annihilation” and “impoverishment”.

Economic problems are followed by the Cyprus problem as a cause of concern, according to the CMIRS survey findings.

These problems coupled with increasing crime rates, lack of trust in institutions, and a huge sense of powerlessness are pushing Turkish Cypriots to seek a future elsewhere, she added.

Social psychologist at Keele University in the UK Hüseyin Çakal agreed. “People have an increasing sense that they are losing the power to do anything,” Çakal said. “And this leads to a huge public resentment… There is a worsening trend in the north of Cyprus. People are like a rock constantly rolling downhill. The fall does not stop… This creates a huge uncertainty for people be it in their social lives, in their economic lives or other walks of life… This uncertainty leads to hopelessness. People don’t see a way out.”