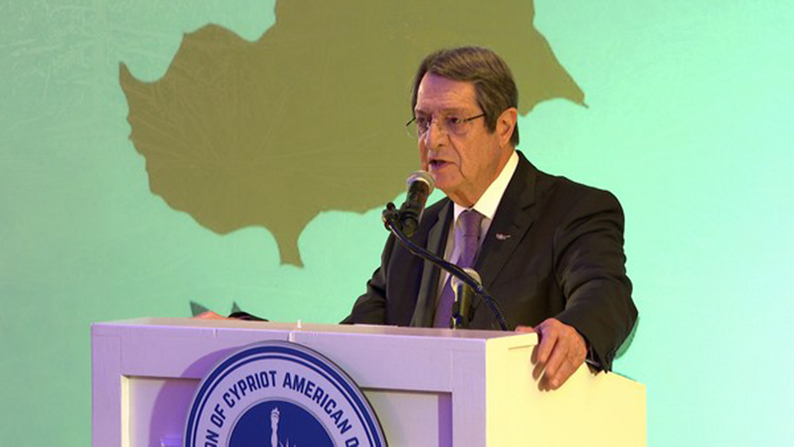 President Nicos Anastasiades told members of the Greek and Cypriot diaspora to keep the flags of both countries high, and that despite the government’s efforts and concessions, Turkey’s intransigence has not allowed a Cyprus settlement to be achieved.

Addressing the annual honorary dinner of the Federation of Cypriot Organisations in the United States in New York late Friday, he said: “Keep the flag of Greece and Cyprus high. Keep our ideals and defend our country as you have done for the past decades. Those who persist, win and this will happen in the end because justice will prevail despite the hypocrisy that distinguishes some circles.”

Anastasiades added that this was the last time he would address the expatriate community, who had excelled and supported their homeland dutifully.

Commenting on the financial crisis, he said that in a short period of time the government had managed to reverse both the adverse effects on the economy and the unfavourable situation that had been created.

He said that from the very beginning they focused on recovering Cyprus’ territorial integrity.

He noted that Cyprus was an EU member state and has forged alliances so that it feels safe.

Regarding the relations with the US, he said: “I want to emphasise what we achieved together, the efforts to make America realise that there is a strategic ally in the Mediterranean which, in cooperation with other countries in the region, can ensure and guarantee stability.”

He added that today, the US is a strategic partner along with Israel providing for greater benefits and synergies for those interested in the region.

Anastasiades also spoke about the honoured guest of the evening, Greek Cypriot scientist, Dr Kyriakos Athanasiou, who was given the “Lifetime Achievement Award”.

“You are also honouring a young, distinguished scientist who made our small country bigger. Citizens like Kyriakos Athanasiou, who through science, through initiatives and dedication makes us feel proud. And I want to congratulate you for this choice,” he said.

Commenting at his speech at the UN General Assembly, Anastasiades said: “Today, I had the opportunity to speak openly about the United Nations and about people who turn a blind eye.  There are many times in which interests prevail. But our fight can change this situation and this hypocrisy. Continue to honour our homeland and your homeland will honour you as you deserve.”