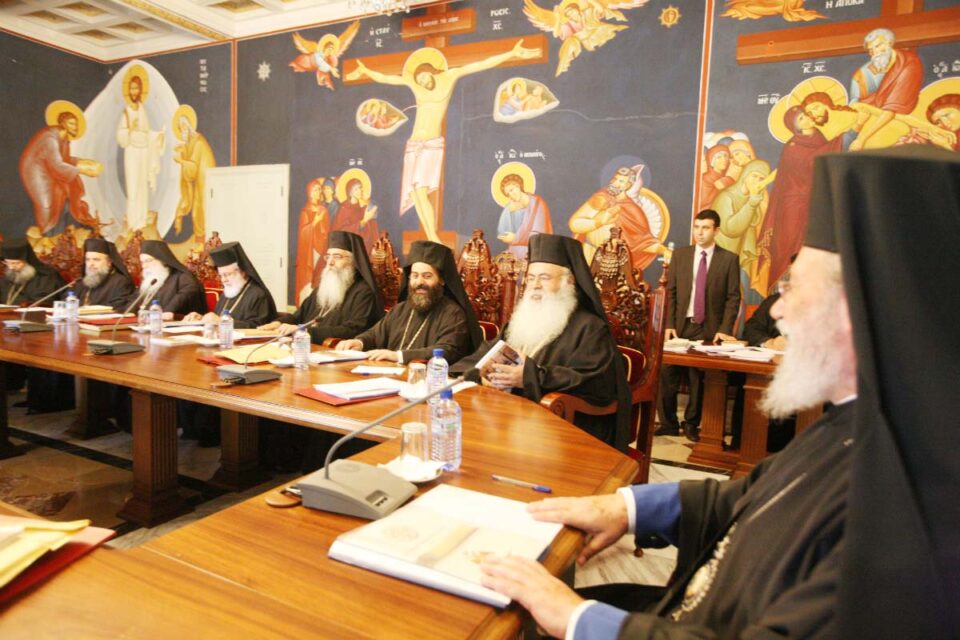 According to observers the position of Archbishop is coveted by a number of top priests.

Although not overtly, scenarios are being floated and alliances are being forged behind the scenes within the Church of Cyprus related to the succession of Archbishop Chrysostomos II whose declining start of health has become a growing cause for concern.

The 81-year-old prelate suffers from cancer, said to have metastasised to various organs.

The archbishop, who last traveled to Israel for treatment in July, has a subdued look about him during his infrequent public appearances. He himself puts on a brave face, saying in a recent interview that only God decides when it’s a person’s time.

According to observers, the position of Archbishop is coveted by a number of top priests who are split however over the recognition of the Church of Ukraine as an autocephalous church.

Asked whom he’d like as his successor, Chrysostomos in the interview demurred, saying only that he’d want the priests to “sit down and work it out together.”

But he added that he would like the next archbishop to “have an opinion on the national issue [i.e. the Cyprus problem], because otherwise I fear we will lose Cyprus.”

In the same interview, the ageing prelate was also asked whether the archbishop-to-be might come to be ‘controlled’ by the Moscow Patriarchate.

“Not a chance,” he replied confidently. “The Church of Cyprus is well organised.”

But back to basics – under what circumstances is the head of the Cyprus Church replaced, and how are elections held?

A change in the leadership occurs upon the death of the incumbent. Alternatively, he may resign. But if he does resign, a medical council must deem the archbishop to be of sound mind to ensure the decision is legitimate.

In the event of death, or irrevocable incapacitation, or when an archbishop is found to be of unsound mind, the throne is declared vacant and a caretaker appointed. In Cyprus, the caretaker is always the Bishop of Paphos – no matter how many years he has served. In Greece, by contrast, the caretaker is decided according to seniority.

Forty days after the throne is declared vacant, elections are held for a new archbishop, the process overseen by the caretaker.

Under an amendment to the Church charter instituted in 2010, elections are direct – people vote in their registered parish. And there are no formal ballots, as in civilian elections; instead, the ballots are a blank piece of paper, where parishioners write down whomever they’d like to be archbishop. And they can vote for essentially any rank of the clergy – including deacons.

Prior to the change, separate elections had been held – one among laypersons, another among the clergy. It was a more complex process, involving the election of delegates before the nomination of the actual candidates for the throne.

Another important difference now is that all people of the Orthodox faith aged 18 and above, and who have been residing in Cyprus for the past year at least, are eligible to vote. That means, for example, that Russian and Greek nationals living here get to vote. But up until 2010, only Greek Cypriot Orthodox over the age of 18 could cast a ballot.

The corollary of all this is that the Russian expat community in Cyprus – numbering tens of thousands – will have a say in the next elections. Some believe that this pool of voters may even play a crucial factor, depending on turnout. Perhaps that harkens back to the question put to Chrysostomos regarding the presumed influence of the Moscow Patriarchate on church elections here.

Once the ballots are counted, those top three clergymen garnering the most votes become official candidates for the throne – a kind of ‘triumvirate’.

A first round of voting is held, where if one of the three candidates acquires 50 per cent +1 of the votes (that is, 8 + 1 = 9 ) he is named archbishop. If not, a second round takes place, this time featuring the two of the three candidates who got the most votes in the first round. Again, the 50 per cent + 1 vote applies for the victor. If that still fails to yield a winner, he will be decided by simple lottery.

“Incidentally,” comments Aristides Viketos, a journalist who has long covered Church matters, “the candidates – assuming they happen to be members of the Holy Synod – can likewise vote and can vote for themselves.”

That sets up some intriguing dynamics, making it clear that at the end of the day it is the power balance and alliances within the Church that will ultimately determine who gets to sit on the throne. That’s because as things stand, the chances of an ‘outsider’ – someone not already a member of the Holy Synod – being one of the three finalists are slim to none.

So who are the ‘favorites’ for the throne, so to speak? According to Viketos, a poll this summer gave Limassol Bishop Athanasios a firm lead – around 17 percentage points ahead of the second, Bishop of Tamasos Isaias.

“I’ve no doubt that Athanasios will win the popular vote. What happens next, is anyone’s guess,” says Viketos.

According to the journalist, Athanasios avails of excellent organisation within his own bishopric, but significantly he also has a great deal of reach in parishes across the country.

He cited one example, the village of Pervolia, in an entirely different district (Larnaca), where Athanasios manages to get clergy elected who are favourably disposed to him.

“The Akel party also has a lot of pull in Pervolia. That’s why they sometimes call it ‘Little Moscow’.”

Moving onto politics, Athanasios is one of five top bishops opposed to the Church of Cyprus’ recognition of the Ukraine Church as an autocephalous ( self-governing) church, following the 2019 recognition by Bartholomew, Ecumenical Patriarch of Constantinople.

In 2020 the matter appeared to have been settled when the Holy Synod voted on the matter, with the majority confirming the recognition of the Ukraine Church. But the five ‘dissidents’ – the bishops of Limassol, Tamasos, Morphou, Amathounda and Neapolis – still refuse to acknowledge the result of that vote.

In a twist, however, in November 2021 Athanasios participated with Archbishop Chrysostomos in a co-liturgy which ‘praised’ – that is to say, recognised – the Metropolitan Epiphanius of Kiev as the primate of the autocephalous Church of Ukraine.

To Viketos, this move by Athanasios signals that the bishop seeks to dial down the dispute over the Ukraine Church, and also smooth over relations with the ‘pro-Ukraine’ Bartholomew.

But at the same time, Athanasios has never publicly ‘recanted’ his position relating to the Church of Ukraine. Nor have the other four ‘dissidents’.

More intrigue followed in July this year, when both Athanasios and Isaias visited Constantinople and were officially received by Bartholomew.

Their manoeuvre, says Viketos, has likely wrangled the other three ‘rebels’ in terms of the issue of the Church of Ukraine. If the loose alliance between the five ‘dissidents’ has in fact been fractured, this ‘faction’ may put forward more than one candidate in the next elections for archbishop – rather than form a united front behind Athanasios.

In turn, it remains to be seen whether the other ‘faction’ – those in favour of recognising the Ukraine Church – will coalesce into a single candidate with enough muscle to thwart Athanasios’ ambitions.