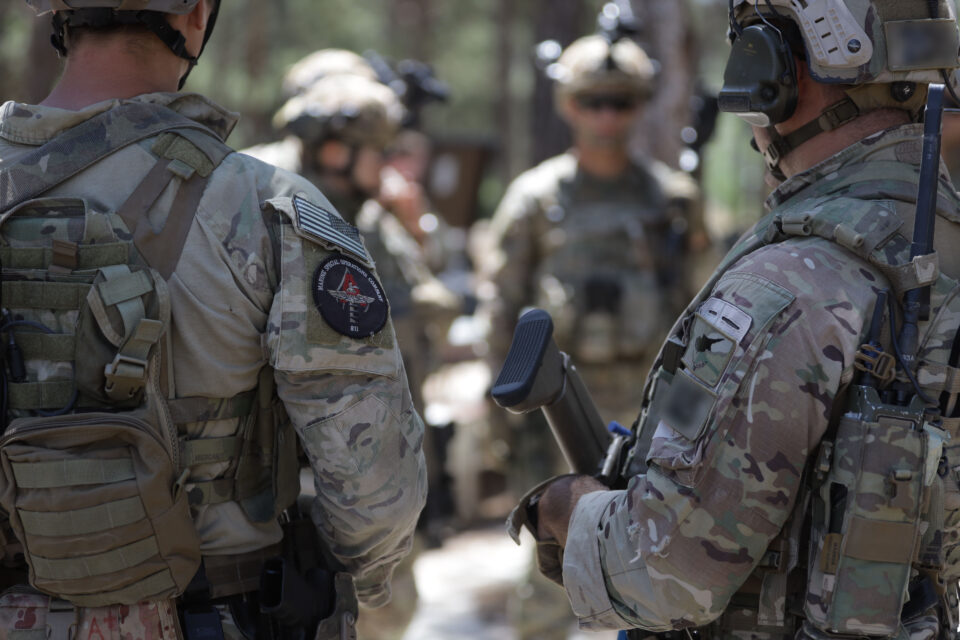 In August this year, Cypriot and US special forces carried out a joint exercise on the island (CNA)

On Wednesday it was reported that President Anastasiades was to meet Russia’s foreign minister Sergei Lavrov, later in the day, in New York, where they were both staying for the UN General Assembly. It seemed very strange that at time when Russia is considered a pariah state by the European Union, Anastasiades had arranged to meet its foreign minister. At the meeting, the president would also have raised the Turkish claims about the start of direct flights from Moscow to the occupied north, it was reported.

The scheduled meeting was cancelled by Anastasiades in reaction to President Putin’s latest declarations about the war in Ukraine, said the government spokesman, Marios Pelekanos. He said the meeting had been arranged ‘some time ago,’ but after Putin’s speech on the Ukraine war it was deemed necessary to cancel it. The guidelines of the EU, against member states having bilateral meetings with Russia had also been taken into account said Pelekanos.

At a time of ongoing hostility between Russia and the EU over the war in Ukraine that had led to the imposition of sanctions against Russia which has, in turn, threatened to leave Europe without gas this winter, what was Anastasiades reasoning in arranging a meeting with Lavrov? What was there to discuss? The issue of direct flights surfaced long after the meeting was arranged while sanctions have limited exchanges. With the Cyprus problem deep in hibernation, there really was no purpose for the meeting, unless Anastasiades wanted to reaffirm his close ties with Moscow despite the EU sanctions.

If this was the case, he is either out of touch with political reality or in denial. The days when the Cyprus government could pursue close ties with Moscow and act as its proxy in the EU are over and unlikely to return any time soon. The invasion of Ukraine has divided the world and as an EU member Cyprus is on the other side, acting with the rest of the Union in approving and implementing sanctions against Russia. The days of the ‘multi-dimensional, multi-faceted’ foreign policy, which was government code for having one foot in the West and one foot in Moscow, are over, even though there is difficulty accepting it. Phileleftheros carried a very critical article about the cancellation, arguing that Anastasiades should have gone ahead with the meeting because it was in country’s interest.

There is another reason that the days of close relations with Moscow are gone for good. The complete lifting of the US arms embargo, which was welcomed by Nicosia as a historic and landmark decision, is with strings attached. Russian navy ships are barred from docking in Cyprus ports, even for refuelling, and the US will be monitoring the situation and carrying out an annual review. This is unlikely to go down well in Moscow, which had made its displeasure known back in 2020 when the US conditions for the partial lifting of the embargo that were included in the East Med Act were announced. The refuelling of Russian navy ships continued until the EU sanctions were imposed, but will not resume, if the military cooperation with the US is to be maintained.

Defence minister, Charalambos Petrides, speaking earlier in the week, said the government had made a ‘strategic decision’ in satisfying the conditions of the East Med Act for the lifting of the arms embargo. What he was saying was very clear – Cyprus had taken the decision to take its “strategic relations with the US to a new level.” This involved practical cooperation on defence such as access to the US arms market, participation in military training programmes in the US, bilateral dialogue and participation in military exercises in the Mediterranean with other western countries. These strategic relations with the US, explicitly preclude close ties with Russia, the type Cyprus has enjoyed until the invasion of Ukraine.

By accident or design, Cyprus has finally joined the West. It may have not become a member of Nato, but the formalising of strategic relations and defensive cooperation with the United States is as good as. This also means the end of the Cyprus government’s traditional subservience to Moscow, which was justified on the pretext of Russia’s allegedly principled stance on the Cyprus problem. That myth has also been laid to rest with Turkey becoming Russia’s closest ally and supporter, although our political establishment doggedly refuses to see this reality.

There will be no choice now. Our government, perhaps without realising it, has finally joined the grouping of the democratic and liberal West, which signals the end of its cozy relations with Russia. It was about time.