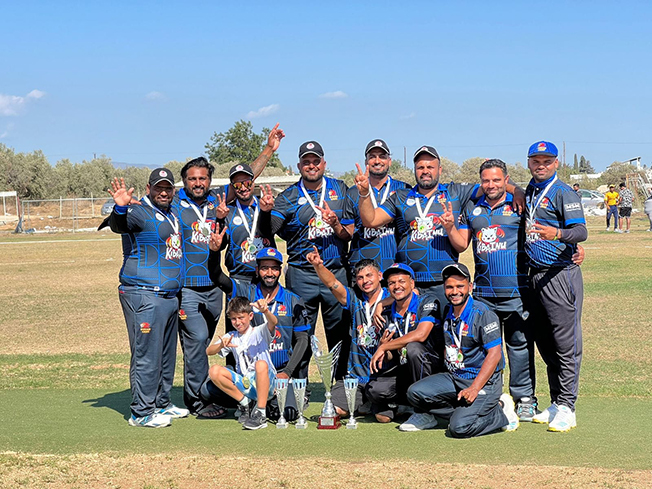 Punjab Lions were awarded the winners’ trophy, and a place in next year’s European Cricket Series

The final of the CCA BAOFinancial T20 Cup saw reigning champions Punjab Lions retain their title with a comfortable 8-wicket win over Black Caps at Ypsonas cricket ground on Sunday.

Black Caps chose to bat and reached 28 without loss before Gurpartap took two wickets in three balls. After another partnership of 28, it was Taranjit Singh who took two in an over, including the top scorer Pawandeep Paul for 23. Then, after a wicket for Tejwinder Singh, it was Gurpartap again with two in two balls as the collapse continued. After 10 overs Black Caps were 69-7. The last three wickets soon fell to Taranjit, who finished with 4-18, and Gurpartap (5-17) for an all-out total of 88, with 7 overs unused.

Gurpartap then hit a rapid 17 to get the Lions on their way, before Zeeshan Mehmood demonstrated again what a fine player he is by hitting 51 not out from 23 balls, bringing his team to victory in company with Kulwinder Singh (16 not out).

Punjab Lions were awarded the winners’ trophy, and a place in next year’s European Cricket Series. Individual T20 cup awards were won by:

The T10 final was played on the same day. This competition was a consolation event for teams that did not qualify for the later stages of the T20, but was nevertheless keenly contested. Limassol Zalmi continued their resurgence by beating Nicosia Tigers by 10 wickets to claim the trophy.

Tigers made a disastrous start, losing 4 wickets for 12 to the bowling of Babar Ayub and Faisal Khan. Shakhawat Hossain, Jamil Linkon and Kazi Alam tried to repair the damage but a final score of 89-7 was not going to be easy to defend. Babar finished with 3-18 and Faisal 3-22.

Zalmi only needed 7.2 overs to knock off the runs without loss, thanks to Noman Zeb (56) and Umar Shah (31), completing a highly successful weekend for the team, as they had beaten early leaders Amdocs the day before in the 40-over league.

Amdocs made a challenging score of 260-7, with half-centuries by Sagar Sanap (64) and Srikanth Komiripalepu (60). But Zalmi had a second-wicket partnership of 100 between Umar Shah (66) and Sohail Ahmed (75), followed by useful contributions by Shahid Ali, Faheem Rehan and Syed Ziauddin, to guide them to a 5-wicket victory, despite the efforts with the ball of Avinash Rane (3-42).

Also in the 40-over league there was a thrilling game between the Sri Lankan CC from Nicosia and their Limassol based compatriots Sri Lanka Lions. These matches are always keenly fought and this one was no exception.

The Nicosia team chose to bat first but slipped to 117-7, before a 112 run partnership between Nalin Gamage (82 not out) and Shabi Ul Hasan (49) lifted them to 263-9 at the end of their innings. Chamal Sadun took 3-37 and Kamal Raiz also bagged three, a little more expensively.

The Lions started their reply well, with Sachithra Tharanga (70) supporting Akila De Silva (35) and Chamal Sadun (46) in two strong partnerships that took the score to 135 in 15 overs. After a slight wobble, with Shabi Ul Hasan taking 3-37, a rapid innings of 51 not out by Roshan Lakmal, with 6 sixes, carried the Lions to victory by 4 wickets with 5 overs to spare.