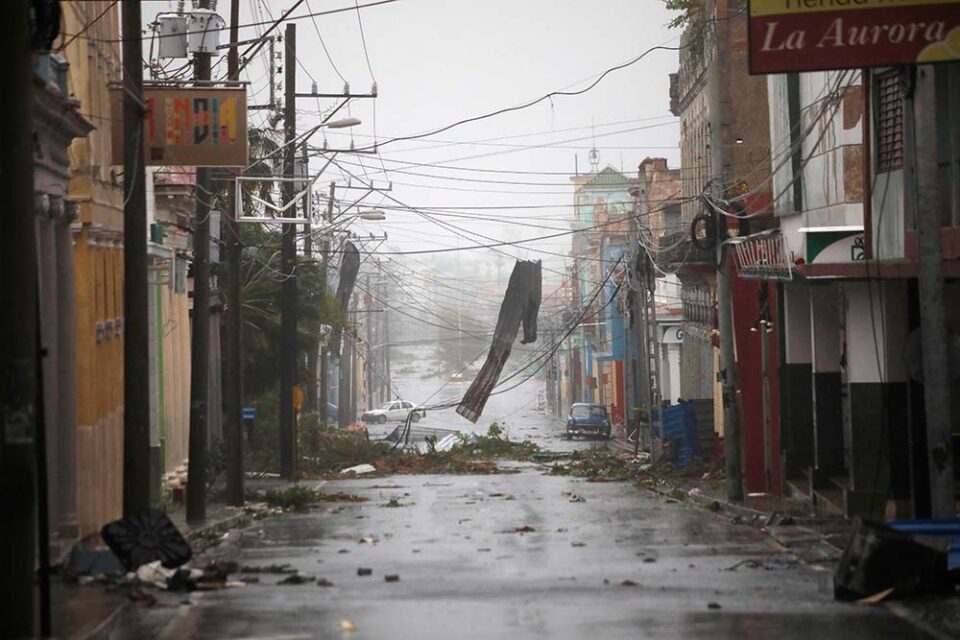 Debris hang on the street in the aftermath of Hurricane Ian's passage through Pinar del Rio, Cuba, September 27, 2022. REUTERS/Alexandre Meneghini

Cuba‘s electrical grid collapsed late on Tuesday, local officials said, leaving the entire country in the dark shortly after Hurricane Ian plowed through the western end of the island leaving a path of destruction in its wake.

The sprawling Category 3 hurricane was barreling north towards the Dry Tortugas, off the Florida Keys, late on Tuesday, with maximum sustained winds of 120 miles per hour (195 km per hour), the U.S. National Hurricane Center (NHC) said.

Cuba‘s electrical grid – decades-old and in desperate need of modernization, has been faltering for months with blackouts an everyday event across much of the island.

But officials said the storm had proven to be too much for the system, provoking a failure that shut off the lights for the island’s 11.3 million people.

“The system was already operating under complex conditions with the passage of Hurricane Ian,” said Lazaro Guerra, technical director of Cuba‘s Electricity Union. “There is no electricity service in any part of the country right now.”

He said the union would work through the night and into Wednesday to restore power as soon as possible.

The countrywide blackout added insult to injury for exhausted Cubans.

Mayelin Suarez, a street vendor who sells ice cream in the provincial capital, called the night of the storm’s passage the “the darkest of her life.”

“We almost lost the roof off our house,” Suarez told Reuters, her voice trembling. “My daughter, my husband and I tied it down with a rope to keep it from flying away.”

The hurricane hit Cuba at a time of dire economic crisis. Blackouts and long-running shortages of food, medicine and fuel are likely to complicate efforts to recover from Ian.

“Ian has done away with what little we had left,” said Omar Avila, a worker at butcher shop in Pinar del Rio. “It’s a horrible disaster.”

Ian made landfall in Cuba‘s Pinar del Rio Province early on Tuesday, prompting officials early on to cut power to the entire province of 850,000 people as a precautionary measure and evacuate 40,000 people from low-lying coastal areas, according to local media reports. The storm left at least two dead in western Cuba, state-run media reported.

Violent wind gusts shattered windows and ripped metal roofs off homes and buildings throughout the region, where many houses are decades old and infrastructure is antiquated. Roads into the areas directly hit by the hurricane remained impassable, blocked by downed trees and powerlines.

“I’ve never seen anything like this,” said Ana Julia Gomez, a 56-year-old woman who lives alone in Pinar del Rio, as she surveyed the wreckage inside her home. “I lost everything; nothing is left.”

Pinar del Rio Province is a rural, lightly populated region but a top producer of farm crops and tobacco. State-run media said farmers had secured 33,000 tonnes of tobacco in storage from prior harvests, but many farms buildings, made with thatched palm roofs, had been flattened by the storm.

“Sometimes hurricanes pass through here, but not of this magnitude,” said Abel Hernandez, a 49-year-old tobacco farmer. “It destroyed our houses, our drying huts, our farms, the fruit trees, everything.”

Neighboring Artemisa Province, nearer Havana, reported that 40% of its banana plantations had been damaged by the storm.

Havana appeared to have escaped the brunt of the storm although rain and strong winds uprooted trees, flooded low-lying areas and left many of the city’s roadways impassable.

By 8 p.m. local time, it appeared that virtually all of the city was without power, with only some of the larger tourist hotels still lit by generators.

Further north, in Florida, residents and officials were hunkering down in anticipation of what the NHC called a “large and destructive hurricane.”

Ian is expected to bring winds of up to 130 mph (209 kph) and as much as 2 feet (0.6 meter) of rain to the Tampa area on Florida’s Gulf Coast starting early on Wednesday through Thursday evening, the National Weather Service said.

A hurricane warning has been extended to portions of far southwestern Florida as the storm’s path veered slightly from previous predictions.

The storm surge along Florida’s Gulf Coast could cause devastating to catastrophic damage with some locations potentially uninhabitable for weeks or months, the service warned, urging residents to move to safe shelter before the storm’s arrival.

The Category 5 hurricane struck South Miami-Dade County with winds of 165 miles per hour (270 km per hour), causing an estimated $25 billion in damages in the state. Fifteen people were killed as a direct effect of the storm, with dozens more dying of indirect causes. Andrew ranked as the most expensive storm in U.S. history until Hurricane Katrina raged through New Orleans in 2005.

Charley was an unexpectedly powerful hurricane, rapidly developing into a Category 4 storm just before making landfall at Cayo Costa, an island of Florida’s Gulf Coast. Nine people were directly killed by the storm and an estimated $6.8 billion was lost, according to the NHC.

The death toll of Wilma was thankfully low — five people directly — for a Category 4 storm. Even so, the bill for the hurricane’s property damage was particularly high at an estimated $20.6 billion in the U.S. Wilma ravaged the southern part of the state, generating wind gusts of more than 100 mph (161 kph).

Irma was unique for its extensive size and slow movement, which exacerbated the storm’s damaging winds and heavy rainfall. It left 6.5 million customers without power in the state and caused an estimated $50 billion in property damage, making it one of the costliest hurricanes in U.S. history. Seven people died from the storm and 80 indirectly, according to an NHC tally.

Michael was the strongest hurricane on record to make landfall in the Florida Panhandle, according to the National Weather Service. Wind and storm surge caused catastrophic damage, particularly in the Panama City Beach and Mexico Beach areas. Eight direct fatalities were reported: seven in Florida and one in Georgia. In addition, 43 indirect deaths were attributed to the storm.

Hurricane Katrina in 2005 traveled across the southern tip of Florida, most of the deaths and destruction it caused were in New Orleans. Katrina still ranks as both the deadliest and most expensive hurricane in modern U.S. history.