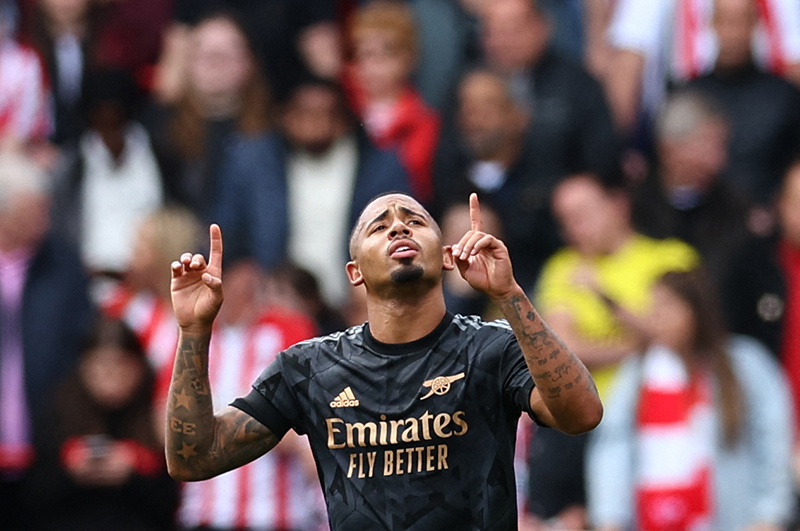 When Arsenal host Tottenham Hotspur in Saturday’s north London derby the intense rivalry between the two clubs will have an extra Brazilian twist as home striker Gabriel Jesus seeks to send a reminder to his national team manager Tite.

Jesus has been a revelation since joining Arsenal from Manchester City, scoring four times in the Premier League and impressing with his tireless work ethic as Mike Arteta’s side top the table after seven games.

But the 25-year-old, capped 56 times for his country and first-choice for Tite at the 2018 World Cup, was omitted from Brazil’s squad for this month’s friendlies against Ghana and Tunisia in France last week and his place on the plane to Qatar looks anything but certain.

Spurs striker Richarlison played, and scored, in both of those games in the number nine shirt and has established himself as the focal point of Brazil’s attack, netting 17 times from 24 starts and seven in his last six appearances.

Richarlison, signed from Everton, has been impressive in Tottenham’s strong start to the season, offering manager Antonio Conte a physical presence to complement his regular forward duo of Harry Kane and Son Heung-min.

“I hope the Brazilian people believe in me more because when called on by the national team I score a lot. I’m wearing the number nine jersey today and every time I wear it, I’m scoring. I hope it stays that way,” Richarlison said after scoring twice in the 3-0 win against Ghana in Le Havre.

Tite clearly likes him, saying “he only has eyes for the goal” while Jesus, who failed to score in five appearances at the 2018 World Cup, appears to now be vying with the likes of Raphinha and Antony for a wide role in the Selecao.

So Saturday’s clash at The Emirates, a game that will be screened in Brazil, offers Jesus the perfect stage to send a message back home and to Tite in particular.

His omission from Brazil’s squad, along with Arsenal forward Gabriel Martinelli and defender Gabriel Magalhaes, was a bonus for Arteta ahead of a hectic period starting with Saturday’s showdown against third-placed Spurs.

He will be hoping they take out their frustrations on Tottenham, who are just a point behind their rivals.

“I understand how they are feeling how it has hit them and how can we help them,” Arteta said of his attacking duo.

“They just have to put their head down and take it on the chin, try and play at the level they’ve been playing at to make it even harder to leave them out.”

Arteta was coy about his possible team selection for Saturday with several players nursing injuries.

“They are part of the team,” Arteta told reporters. “We just finished the last training session, we had many players arriving yesterday, we had a short period to prepare the match but the boys look in good condition.”