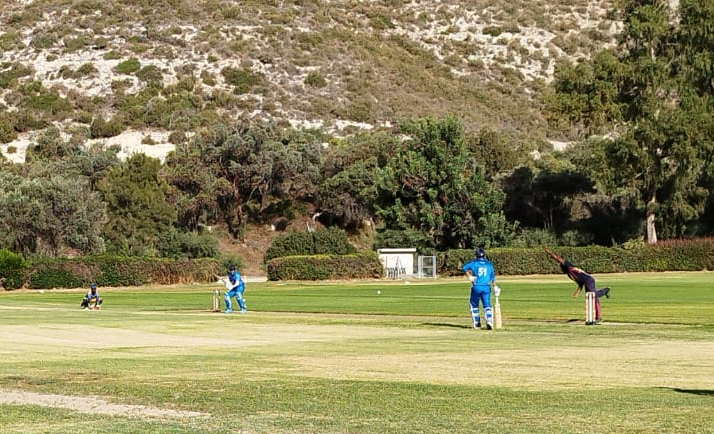 On a busy weekend with seven matches played, pride of place went to Moufflons, who set a new record score in Cyprus of 451 in their 40-over match with Cyprus Super Kings at Ypsonas on Saturday. The previous record – 450 for 5 wickets – was set eleven years ago by Amdocs against Dhekelia.

The unlucky victims this time were put to the sword by Scott Austin (115), Jawad Ali Shah (98) and Mehran Khan (93), while even opening bowler Waqar Ali got in on the fun with 39 not out from 15 balls.

Faced with such a total the Super Kings not surprisingly folded quite tamely, though Manikanta Ranimekala showed some resistance with 48. Jawad completed a good day by taking 3 for 32.

The day’s other 40-over match was also a one-sided affair, as Sri Lanka Lions continued their strong start by beating Amdocs by 8 wickets. Suresh Janaka (4-37) and Chamal Sadun (3-33) restricted Amdocs to 160 all out, a score that was easily surpassed in 15 overs, thanks to Sadun’s 94.

Limassol Zalmi got off to a good start by beating Royal by 23 runs. Noman Zeb hit 73, including 6 sixes, as Zalmi reached 149-9, about a par score at Happy Valley. The Royal batsmen were unable to fly the flag, as Faisal Khan (3-19) and his fellow bowlers kept the scoring rate under control, finally being all out in the last over for 126.

Nicosia Fighters put up a score of 162 at Ypsonas, with Kamrul Mahmud making 38, while Kings XI Punjab’s Lovedeep Singh took 4 for 19. This proved to be no problem for the Punjabis, who knocked off the runs in 15 overs, Rajinder Kumar making 49, Sukhjinder Singh 40 not out, and Lovedeep 36.

Next at Happy Valley Limassol Qalandars were bowled out for 133 by the Nicosia Sri Lankans, with Lahiru Udayanga taking 3-19. Ajith Kumara made 34 in reply, and Malka Dulaj followed his 2 wickets by scoring 42 to guide the Sri Lankans home with four overs and four wickets to spare.

In a game reduced to 15 overs per side Limassol Bangladeshis made 115-7, with skipper Anwar Hossain scoring 41. Cyprus Super Kings bounced back well from their mauling the previous day, to win by 7 wickets. Srinivas Angarekkala followed his 3-27 by hitting 40 to gain a morale-boosting victory.

The remaining match was awarded to Black Caps as their opponents, Green Caps, despite starting the game, were unable to field a full team and had to forfeit – a disappointing footnote to an otherwise good weekend’s cricket