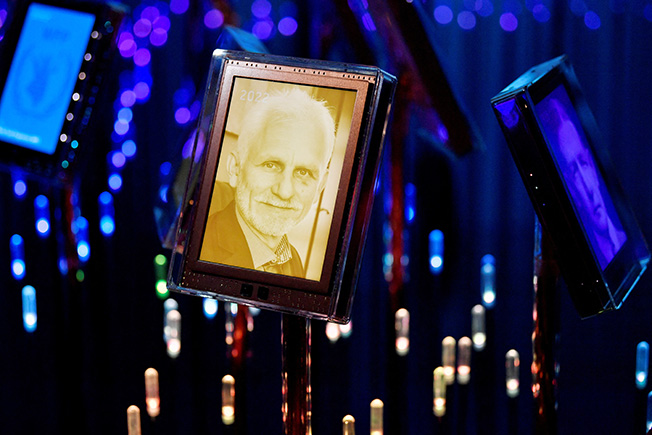 Picture of the Nobel Peace Prize winner for 2022, human rights activist and founder of the organisation Viasna Ales Bialiatski, is updated in Nobel Garden at the Norwegian Nobel Institute together with previous Peace Prize winners

The prize will be seen by many as a condemnation of Russian President Vladimir Putin, who is celebrating his 70th birthday on Friday, and Belarus President Alexander Lukashenko, making it one of the most politically contentious in decades.

The award, the first since Russia’s Feb. 24 invasion of Ukraine, has echoes of the Cold War era, when prominent Soviet dissidents such as Andrei Sakharov and Alexander Solzhenitsyn won Nobels for peace or literature.

“It is not one person, one organisation, one quick fix,” she told Reuters. “It is the united efforts of what we call civil society that can stand up against authoritarian states and, or, human rights abuses.”

She called on Belarus to release Byalyatski from prison and said the prize was not aimed against Putin.

Belarusian security police in July last year raided offices and homes of lawyers and human rights activists, detaining Byalyatski and others in a new crackdown on opponents of Lukashenko.

Authorities had moved to shut down non-state media outlets and human right groups after mass protests the previous August against a presidential election the opposition said was rigged.

The prize will boost morale for Byalyatski and strengthen the hand of the Center for Civil Liberties, an independent Ukrainian human rights organisation, which is also focused on fighting corruption, he said.

“Although Memorial has been closed in Russia, it lives on as an idea that it’s right to criticize power and that facts and history matter,” Smith added.

In Geneva, the Russian ambassador to the United Nations said Moscow was not concerned about the award. “We don’t care about this,” Gennady Gatilov told Reuters.

In Belarus, the award was not reported by state media.

Founded in 1989 to help the victims of political repression during the Soviet Union and their relatives, Memorial campaigns for democracy and civil rights in Russia and former Soviet republics. Its co-founder and first chair was Sakharov, the 1975 Nobel Peace Prize laureate.

Memorial board member Anke Giesensaid on Friday winning the award was recognition of its human rights work and of colleagues who continue to suffer “unspeakable attacks and reprisals” in Russia.

The award to Memorial is the second in a row to a Russian, after the prize to journalist Dmitry Muratov last year, shared with Maria Ressa of the Philippines.

“It is great, thank you,” she told the secretary of the award committee, Olav Njoelstad, during a phone call that was filmed and broadcast on Norwegian television.

“I am really proud to see Ales Byalyatski as the winner,” she said in a phone interview. “(He) has through all his life protected human rights in our country.

“He is a prisoner for the second time, this is showing how the regime is constantly persecuting those who fight for human rights in Belarus.”

She said the prize would help attract the attention of ordinary people inside and outside Belarus to look at Byalyatski and his fight.

“He had two missions: independence for Belarus and human rights in all the world,” she said.

The Nobel Peace Prize, worth 10 million Swedish crowns, or about $900,000, will be presented in Oslo on Dec. 10, the anniversary of the death of Swedish industrialist Alfred Nobel, who founded the awards in his 1895 will.

A minute with Marios Haritou Artist