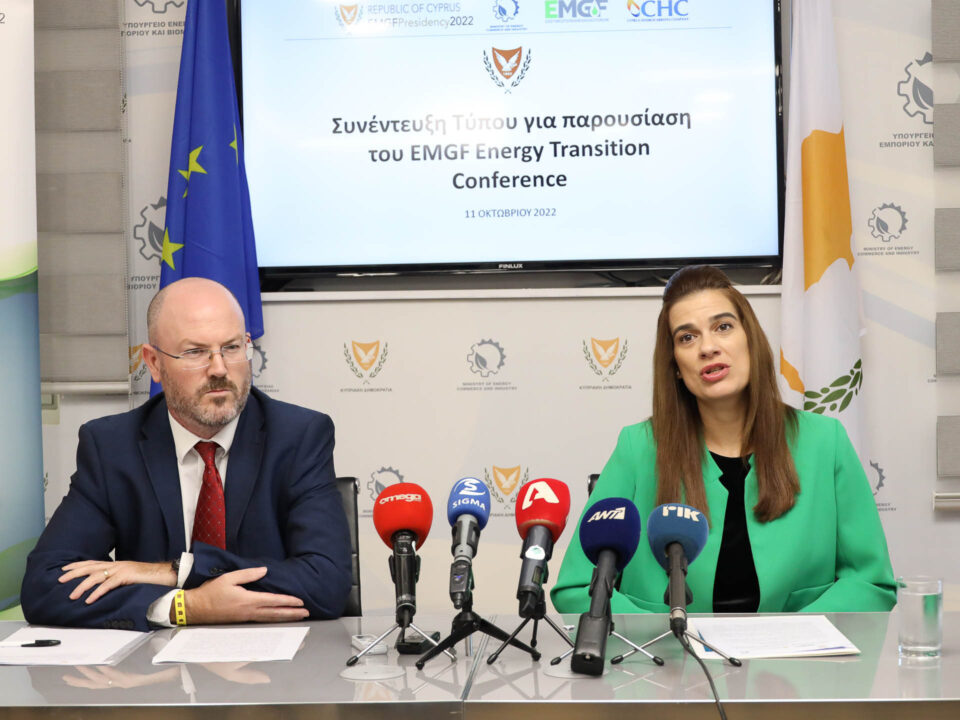 The upcoming conference of the Eastern Mediterranean Gas Forum (EMGF) in Cyprus on October 14, which Minister of Energy, Commerce and Industry Natasa Pilides is leading as forum president, will centre on the European Union’s efforts to wean itself off Russian gas, something which affects all regional gas-producing countries.

The conference, which is taking place amidst the ongoing war in Ukraine, an event which has had severe ramifications on the EU’s energy market, will involve the participation of a number of key stakeholders.

These include the EU Energy Commissioner Kadri Simson, the Energy Ministers of Egypt, Jordan and Greece, as well as the Secretary General of the forum, Osama Mobarez.

Cyprus, Egypt, Greece, Israel, France, Italy, Jordan and Palestine will participate as members of the EMGF, while the EU, the World Bank and the United States have observer status.

“Together with Commissioner Simson and my Egyptian, Greek and Jordanian counterparts, as well as the Secretary General of the EMGF, we will consider the role of Eastern Mediterranean countries and the EU in promoting and strengthening the cooperation needed to achieve the ambitious goals of the green deal, but also for the energy independence of the EU from Russian natural gas”, Pilides said on Tuesday.

According to the Cypriot minister, the afternoon session of the conference will focus on more technocratic issues and will be closed to the media.

The session will look into the progress of the work that has been previously prioritised by the Cyprus presidency of the forum, including the initiative for the Decarbonisation of Natural Gas in the Eastern Mediterranean.

It also examined a specialised study on the role that the Eastern Mediterranean can play a role in the EU’s energy security, contributing with regional natural gas reserves, as well as the transfer of electricity from renewable energy sources through future interconnections, boosting energy diversification efforts through expanded sources and routes.

For his part, Cyprus Hydrocarbons Company acting director general Demetris Fessas said that during the first part of the closed session, the results of the methodology and action plan for the decarbonisation of natural gas of the Eastern Mediterranean will be presented. The plan involves emission reductions throughout the gas industry chain of EMGF member countries in order to support the transition to low-carbon gas resources.

In addition, Fessas said that in the afternoon session there will be a presentation of the road map prepared during the Cyprus presidency of the EMGF due to the energy crisis, through which the Eastern Mediterranean will be able to help the EU’s energy security.

“The roadmap builds on a previous, coordinated effort made at the EMGF to analyse the natural gas demand and production of the forum’s member countries, and we believe it can make a significant contribution to the EU’s efforts to diversify its energy sources and routes,” Fessas said.

In response to a question about the potential role that the Eastern Mediterranean can play in the EU’s efforts to wean itself off Russian natural gas, Pilides stated that the countries of the region can certainly help in the short and medium term.

What is more, she also noted that certain actions have already been planned through the memorandum signed between the EU, Egypt and Israel, in relation to the supply of electricity from the two countries to the EU.

However, Pilides said that a large percentage of gas in Egypt and Israel has been reserved either for the domestic market of each country or for export with previously agreed contracts, affecting the two countries’ short-term ability to supply gas to the EU.

“Therefore, the effort is certainly focused on both the development of additional sources of energy in Egypt and Israel, where the drilling activity will proceed, as well as the gas reserves of Cyprus, where there are significant quantities which could be channelled to the EU”, Pilides said.

“To this end, we will have a bilateral meeting with Kadri Simson next Thursday, as well as a meeting with the President of the Republic, to discuss this issue, among other things, while contacts will certainly be made in the context of the conference in which commissioner Simson will, of course, be present,” she added.

Responding to a question about the next steps in the licensed blocks in the Cypriot EEZ, Pilides said that Chevron remains in contact with the ministry, whose technocratic groups meet with company representatives, alongside the Cyprus Hydrocarbons Company, as well as the consortium responsible for the development of the Venus block.

In addition, she explained that the discussion on the marketing aspect has started, something which the minister described as being quite important for both the overall plan, as well as for the transportation of natural gas to Egypt.

Regarding Exxon Mobil and Qatar Energy, the Cypriot minister said that the seismic surveys, related to data collection in blocks 10 and 5, have been completed, adding that the data now needs to be processed.

“We are anticipating what the next steps will be in relation to Block 10 based on the findings, as well as what the plan will be for Block 5, which was recently licensed to the consortium,” Pilides said.

In relation to the ENI/TOTAL joint venture, Pilides stated that drilling is progressing in block 6.

“We still have no indication of the possible results, but this drilling is certainly very important for the development of our energy programme because any additional quantities will help a lot in the possibility of the rapid development of block 6”, Pilides stated.

Regarding the prospects of the East Med pipeline being implemented, the Energy Minister said that the potential of that happening certainly exists, noting that the studies that will be submitted by the implementing body are expected either at the end of the year or at the beginning of next year.

“The East Med pipeline implementation timeline is a longer-term one,” she explained.

Furthermore, Pilides reiterated that Chevron is considering the scenario of transporting natural gas from the Aphrodite field to Egypt, which is considered to be the most prevalent.

She added that for block 6, the scenario where the gas is transported to Egypt is still possible, while a floating liquefaction unit is also being considered.

“These options can certainly be implemented faster than the East Med pipeline,” Pilides explained, adding, however, that some synergy could exist in relation to the East Med pipeline and natural gas transport from Israel to Cyprus, a scenario for which Cyprus remains open, referencing a proposal by Energean.

“We remain open to the proposal expected to be submitted after the company secures the gas export licenses it needs from Israel to be able to pursue such a matter,” the minister added.

Meanwhile, when asked about the EEZ delimitation agreement between Israel and Lebanon, Pilides said that the signing of this agreement would be a positive development because it would now unlock even more potential in the Eastern Mediterranean, allowing it to contribute to the EU’s independence from Russian natural gas, but also to the more rapid development of natural resources in the region.

“We certainly look forward to seeing the results and remain hopeful that positive announcements will be made soon,” Pilides concluded.