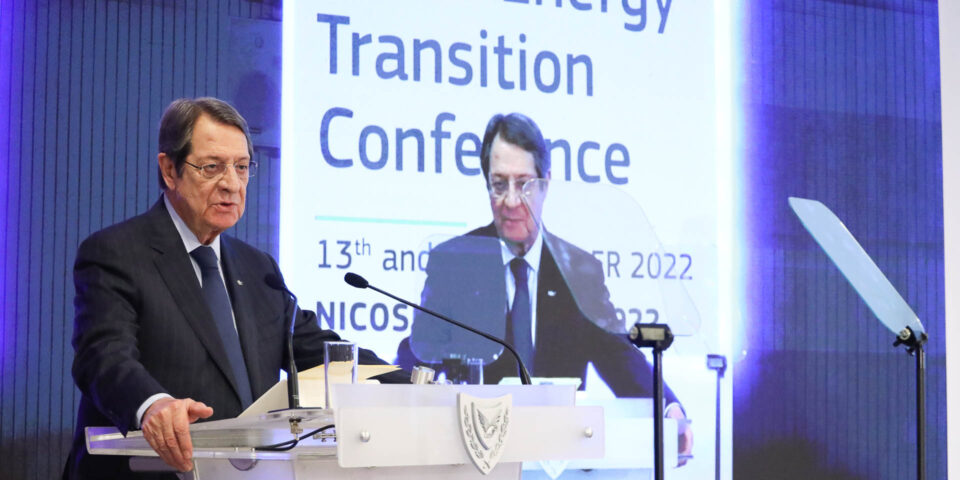 Anastasiades pointed out that there are huge deposits of natural gas off the coast of Cyprus that could contribute to the effort to make the European Union independent of Russian energy supplies.

President Nicos Anastasiades on Friday addressed the opening of the Eastern Mediterranean Gas Forum (EMGF) Energy Transition Conference, noting that the conference being held in Cyprus underlines the collaborative relationship among its member countries.

“Your presence validates our collective efforts to further strengthen our cooperation in energy-related matters, both as a means of achieving lasting stability and peace in our volatile region, and enhancing Europe’s energy security through alternative energy routes,” Anastasiades said.

“Committed to developing a sustainable regional gas market, whilst minimising the technical, financial and political risks involved, the EMGF has proved highly successful not only in bringing countries of our region together, but also a range of different stakeholders, from gas producers and investors, to traders and financing entities,” the president added.

The conference, which is being held by the Ministry of Energy, Commerce and Industry and the Cyprus Hydrocarbons Company at the Presidential Palace in Nicosia, includes the participation of EU Energy Commissioner Kadri Simson, the Energy Ministers of Egypt, Jordan and Greece, as well as the Secretary General of the forum, Osama Mobarez.

The president said that the forum was established on the fundamental principle of full respecting the sovereign rights of independent states, allowing them to exploit their natural resources in accordance with international law.

To this end, Anastasiades explained, the EMGF has managed to “foster cooperation through structured and systematic dialogue on natural gas issues, including on the path to green transition”.

The latest edition of the conference will focus on a number of issues, including providing an overview of EMGF activities, including the progress of the work prioritised by Cyprus’ presidency.

This includes the East Mediterranean Natural Gas Decarbonisation Initiative, as well as the outcomes of a study on the role of the region in the European Union’s energy security, particularly during a particularly tumultuous period of time caused by the ongoing war in Ukraine.

The study, which is supported by the European Union, seeks to examine the region’s potential contribution to the EU’s efforts to diversify its energy sources and routes.

“This may be achieved by transferring East Med natural gas, either as LNG or through pipelines, hydrogen that will be produced in the region in the medium and long term, and clean energy from renewables exported to Europe via electrical interconnections,” Anastasiades said.

“And it goes without saying that the Eastern Mediterranean can assume a key role to this end,” he added.

The president referenced the signature of the trilateral Memorandum of Understanding between the EU, Egypt and Israel for the export of natural gas to the EU, signed in Cairo in June.

“I wish to reiterate that Cyprus, due to its strategic location and its excellent relations and long-standing partnerships in the field of energy with neighbouring countries, at a bilateral, regional and multilateral level, stands ready to make its own contribution and be an active part of the energy solutions that our region has to offer,” the president added.

Moreover, he said that Cyprus has already assumed this role through the start of the construction phase of the “EuroAsia” interconnector between Cyprus, Greece and Israel, with the inauguration ceremony scheduled to take place later today, as well as the future implementation of the “EuroAfrica” interconnector, which will connect Cyprus-Greece- Egypt.

According to current status and planning, the president explained, it is estimated that by the end of 2027, once the first interconnection is in place, Cyprus will have an excess of renewable energy that could be exported or exchanged, in addition to the quantities that could be available from Egypt, Israel, and Greece.

“We also stand ready to examine possibilities and proposals of connecting various natural gas fields in Cyprus – Israel – Egypt- during the next days Lebanon – with either existing or new infrastructure, through which gas can be exported to Europe,” Anastasiades said.

Meanwhile, in terms of the East Mediterranean Natural Gas Decarbonisation Initiative, the final results of which will be presented during COP27 in Egypt next month, the focus has been to develop an action plan to reduce emissions across the value chain of the EMGF member countries’ gas industry. This will support the transition to low carbon-intensive gas resources.

The president noted the EMGF is ready to make recommendations on the policies needed to align efforts to mobilise financing, develop capacities and deploy technologies for the decarbonisation of gas in the region.

“Recognising the vast resource prospects, opportunities and challenges, it is clear that the full energy potential of the Eastern Mediterranean can only be unlocked if suppliers, buyers and transit countries in the region cooperate on developing numerous infrastructure projects for gas, hydrogen and renewable energy trade within the region and with external markets,” the president said.

“The fact that almost all of the Members of the Gas Industry Advisory Committee of the EMGF are active in the exploration and exploitation of energy resources in the East Med, effectively means that a platform for discussion is already available in order to define the synergies for best exploiting them,” he added.

At the same time, President Anastasiades stressed that the importance of the forum extends beyond energy cooperation, saying that it can act as an enabler of regional peace, economic growth and prosperity, both in the region and beyond.

“I wish to yet again stress that the EMGF is open to any country wishing to join us in this collective process, provided it adheres to our shared values and principles in respecting international law, including the UN Convention on the Law of the Sea,” the president said.

“Our motto is that energy should act as a catalyst for peace and prosperity and not in creating tensions and conflicts,” the president concluded.