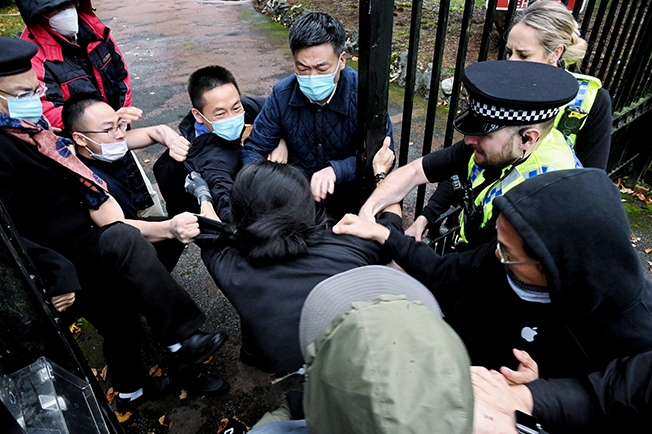 A man is pulled at the gate of the Chinese consulate after a demonstration against China's President Xi Jinping, in Manchester

British police are investigating the apparent assault on a protester who was videoed being beaten by several men after being dragged inside the grounds of the Chinese consulate in Manchester during a demonstration against President Xi Jinping.

In video footage posted by the BBC, a man in a black cap and ponytail was hauled through a gate into the consular grounds, where he was kicked and punched by five men as he lay on the ground.

One silver-haired man in a blue beret, glasses and scarf could also be seen grabbing the man’s hair.

Police at the scene eventually stepped through the gate and pulled the man out.

Sunday’s protest took place on the first day of the twice-a-decade congress of China’s ruling Communist Party in Beijing, during which Xi is widely expected to win a third leadership term.

Several protest banners had earlier been placed outside the consulate, one with the words, “Heaven will destroy the Chinese Communist Party”, and a caricature of Xi wearing a crown, according to pictures provided to Reuters by a freelance journalist on the scene.

The BBC video showed several men from the consulate, some wearing helmets and protective vests, take down several banners, and during a heated confrontation with the protesters, they grabbed one man and dragged him into the consulate grounds.

“Officers were present and responded immediately to diffuse the situation. Enquiries are ongoing at this time to understand the full circumstances,” a spokesperson for the Greater Manchester police told Reuters in a statement.

Britain’s foreign office did not immediately respond to a request for comment.

The Chinese consulate in Manchester offered no immediate reply to requests from Reuters for comment.

Chinese foreign ministry spokesman Wang Wenbin told reporters in Beijing on Monday that he wasn’t aware of the situation, but that Chinese missions acted in accordance with international diplomatic agreements.

Security has been tight Beijing in the run up to the party congress, and police last week removed rare banners of political protest – including one calling for Xi’s ouster – from a Beijing overpass.

Alicia Kearns, a lawmaker in the ruling Conservative Party and the new head of parliament’s Foreign Affairs Committee, said on Twitter: “The CCP will not import their beating of protestors and denial of free speech to British streets. Chinese Ambassador should be summoned & if any official has beaten protesters, they must be expelled or prosecuted.”

Matthew Leung, a freelance journalist on the scene and friend of the man who was beaten, told Reuters by phone he was “shocked” by the incident.

The man who was beaten had recently emigrated to Britain from Hong Kong, Leung said. He suffered cuts and bruises to his face, and went to hospital for treatment.

The man didn’t immediately respond to a Reuters request for comment via a messaging app.

Chinese-controlled Hong Kong was rocked by anti-government protests in 2019, after which Beijing imposed a sweeping national security law that has been used to arrest leading democrats, and shutter civil society groups and media outlets.