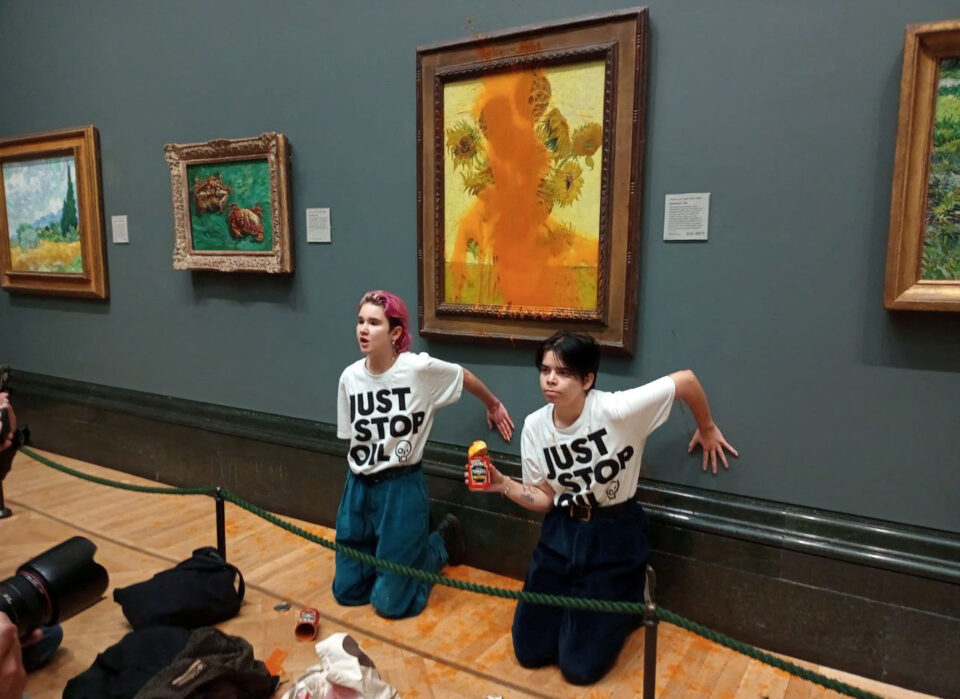 Waves of controversy were sparked recently when the Just Stop Oil activists threw tomato soup over Van Gogh’s Sunflowers at the National Gallery in London. Although the painting was behind glass so not damaged, politicians were quick to condemn their “attention-seeking” vandalism while media commentators proclaimed that the act had “lost them” to the cause.

It is perhaps with some poetic timing that I’ve just started a project that is an oral history of the environmental movements in the UK. The aim is to contribute to a greater understanding and wider public awareness of the variety of modes of engagement with environmental issues.

This tactic was certainly a provocative act and Van Gogh’s work is undoubtedly some of the most important artwork of modern times. However, many of these commentaries on Just Stop Oil’s actions simply just don’t hold up.

The main critiques of the activist stunt are that it alienates people who are sympathetic to the climate cause by attacking a much-loved and important piece of art. That it smacks of middle-class activism and is overly performative. And, finally, that it has required “explanation”, which if you have to do, you’re losing.

While there is some truth to these critiques, I don’t buy them.

Rather than wade further into the quagmire of social media debate, here is a breakdown of the three arguments and explanations of why I think that this kind of provocative activism deserves our unwavering support.

1. Art is an extension of corporate power

First off, museums and art galleries have long been used by fossil fuel companies for the purposes of artwashing – the ethically acceptable process of funding art and culture to smooth over their very unethical corporate practices. Some of the more conscientious institutions (including The National Gallery) have cut ties with any sponsorship from oil companies, but others have doubled down on it.

Art itself, through the networks of global trading, tax avoidance and the creation of freeports (huge walled complexes where art is stored away from prying eyes and tax collectors), has become totally intertwined with global corporate and fossil fuel capitalism. Corporations plough money into art institutions and art pieces themselves because it buys them validity in the eyes of the public. Art becomes a shield for their more nefarious planet-destroying practices.

But the art should never be considered above, or separate from, the capitalist content behind it. Millions of treasured pieces of art are now under the purview of corporate power and have become windows – beautiful windows no doubt, but still windows – into the shady practices of global capital and international tax avoidance. As hard as it is to stomach sometimes, art pieces, in this way, become extensions of corporate power and hence are legitimate targets of climate activism.

2. Fighting class oppression and climate change is the same

The second critique, often coming from the left, accuses climate activism of being inherently middle-class. Groups, they argue, are populated by white people and the “mess” they create (be that with soup on paintings or milk on supermarket floors) is often cleared up by working-class cleaning staff.

There is truth in these arguments, which are often missing from the justification of these activist practices. However, taking a more holistic approach, social and economic justice is a fundamental pillar of climate justice – you cannot have one without the other. The Just Stop Oil activists who defaced the Van Gogh recognised these arguments in part when they said that many people “can’t afford to even buy and heat soup because of the energy crisis”.

“Solving” the climate crisis demands total system change. As Greta Thunberg and other prominent voices have constantly said. Capitalism will not solve the problem, it only makes it worse. Capitalism has the oppression of the working class as its core engine. So, fighting against the changing climate means also fighting capitalism’s class (and indeed, racial, gendered and ableist) imbalance. The two are, and need to continue to be, one.

Finally, some people have wheeled out the phrase “if you’re explaining yourself, you’re losing”. Again, there is a kernel of truth to that, but the severity of the climate catastrophe needs no further explanation.

Explaining is not the point of direct action. If you need to be “won over” by the argument, then you’re clearly not doing enough.

Just Stop Oil’s action with soup on Sunflowers was to symbolise that we’re attacking something we love. The level of ire at those symbolically ruining – remember, it was behind glass so has not be destroyed – a precious art piece should be given a million-fold to those who are actually ruining our precious planet.

Direct climate action will only increase as the situation worsens and our governments continue to actively make things worse with new mines, fracking and new oil drilling contracts. Destroying pipelines, demanding an end to private jets and other direct action against fossil fuel burning infrastructures are important acts in this regard. They highlight how art is also part of that infrastructure and is therefore equally vital.

The current crop of climate activists –- Just Stop Oil, Extinction Rebellion, Insulate Britain etc – will forge their own path because that is what activists need to do to make their points heard. But for all the reasons outlined above, understanding the history (and their successes and failures) will be important to help build a coherent, united and effective climate movement.

That cohesive movement will need art yes, but not as a conduit for the very capitalist vehicles that are destroying our beautiful planet. As Van Gogh himself said:

Oli Mould, Lecturer in Human Geography, Royal Holloway University of London. This article is republished from The Conversation under a Creative Commons licence