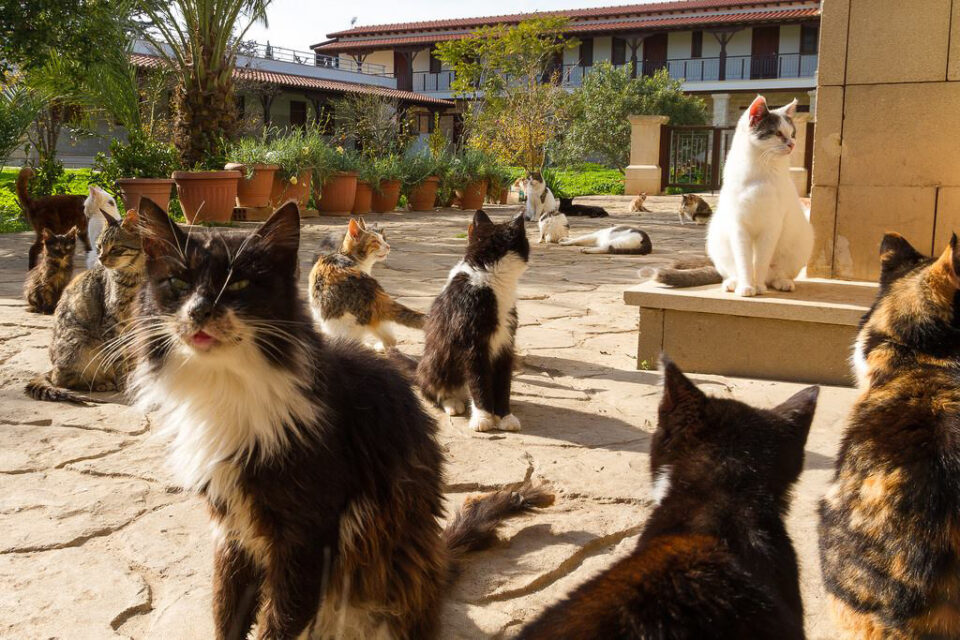 Cats and Christianity come together in a monastery in Akrotiri. PAUL LAMBIS has a look around

Cyprus is an island with a strong Christian heritage, and has been known through history as a place of religious significance, having been visited by apostles and saints on their missionary journeys to spread the gospel across the ancient world.

Following his resurrection, Lazarus made his way to Cyprus, where the apostles Barnabas and Paul, who were preaching to the Gentiles and laying the foundations of Christianity, later appointed him as Bishop of Kition (modern-day Larnaca). Tradition has it that on her way to Mount Athos in Greece, the Virgin Mary stopped in Cyprus to visit Lazarus.

Prior to his founding the episcopal see of Alexandria in Egypt, Mark the Evangelist also travelled to Cyprus, joining Barnabas on another missionary tour.

In 327 AD, Constantine the Great’s mother Saint Helena visited Cyprus on her journey home from Jerusalem. She is credited with starting the construction of numerous churches and monasteries including the Holy Monastery of Saint Nicholas of the Cats in Limassol at the beginning of the fourth century.

Located close to the Akrotiri Salt Lake, regarded as one of the most important wetlands in the Mediterranean region drawing thousands of birds on their migratory routes to Africa or Europe, the Monastery of Saint Nicholas of the Cats is one of the oldest monasteries in Cyprus managed by a sisterhood of nuns.

“Our monastery is a spiritual haven that enables the individual to perceive the world from a fresh perspective,” the Mother Superior of the monastery said. “It is a place with numerous spiritual advantages that fosters a stronger intimate relationship with God.”

Once a refuge for fugitive monks who were pursued during the Byzantine iconoclasm period, when the use of religious symbols and icons was forbidden by religious and imperial authorities, the monastery is now a sanctuary for just over 100 cats.

Recent excavations lend credence to the idea that the location served as a crucial harbour for the Byzantine Empire’s fleet. “It is possible that the monastery alone changed its function in imperial policy, which included harbouring refugees and holy relics,” the Mother Superior added.

According to tradition, the island experienced a catastrophic drought at this time, allowing poisonous snakes to multiply and drive away not only the monks who were building the monastery but also the natives of the island.

“To deal with the infestation, Saint Helena had 1,000 cats sent to the island from Persia and Egypt. She trained the cats to respond to two bells, one for feeding time and the other for snake hunting time. After confrontations in which the cats supposedly lost their eyes and noses, the snakes were practically eliminated from the island, allowing the monastery to be completed.”

Although the original building has been destroyed and rebuilt numerous times over the centuries, the cats on the island remained, and even flourished into an unofficial sub-breed known as the ‘Cyprus cat.’

When the current monastery was handed over to a group of nuns in 1983, the grounds themselves had become devoid of cats, and the snakes had returned. Unsurprisingly, the sisters borrowed a strategy from the past and brought feral cats inside, which soon solved the issue.

The monastery is dedicated to Saint Nicholas, the patron saint of fishermen, sailors, and travellers. “There are two stories that suggest how the monastery was given its name,” the Mother Superior told Living. “The first honours Saint Nicholas because the area used to be a popular fishing spot. The second version has a direct connection to shipping because that is how the cats were transported to Cyprus.”

Today, the monastery is still home to around 100 cats and less than a dozen nuns. Although it is a small space, the sanctuary is surrounded by gardens and olive groves and is very inviting. The monastery is entirely supported by donations, including the money required to care for and feed its cat population.

“Our doors are always open to all kinds of visitors, even those who seek to escape the chaos of the outer world in pursuit of a profound and spiritual connection,” the Mother Superior said. However, the main appeal that brings in visitors from all over the world is its burgeoning cat population, and the deep-rooted heritage that surrounds them.

European gas prices: why have they been falling?