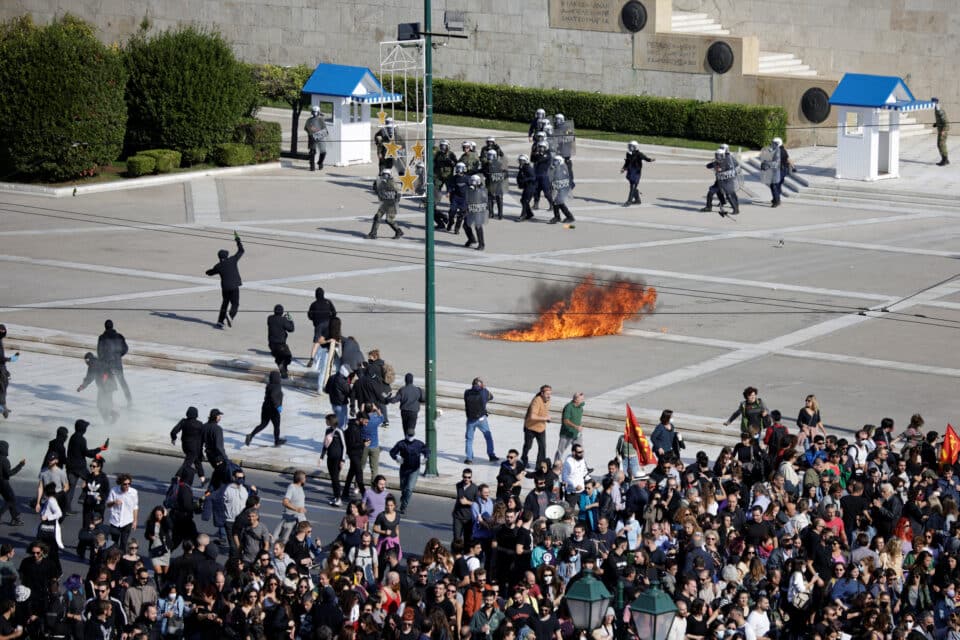 Protesters run as others throw petrol bombs at riot police, during a demonstration marking a 24-hour general strike, in Athens, Greece

Greek workers went on a day-long strike on Wednesday, demanding higher wages to cope with surging inflation, as Europe’s soaring energy prices and living costs trigger industrial action and protests across the continent.

In Athens, thousands of people marched in the second 24-hour walkout this year over rising inflation, some holding up banners that read, “No to layoffs, no to pay cuts.” Brief clashes broke out outside parliament between protesters hurling petrol bombs and riot police who fired tear gas.

It is the latest labour action in Europe, where a growing cost of living crisis and rising energy prices following Russia’s invasion of Ukraine have led to strikes this month in Britain, France, Spain, and Germany, the region’s biggest economy.

The Greek economy is growing at nearly twice the euro zone rate this year thanks to a rebound in tourism, but inflation is near a three-decade peak at 12%, among the highest in the zone’s 19 member countries.

The General Confederation of Greek Workers union (GSEE), which represents private sector workers, said unions had called the strike in protest “against the inflation suffocating Greek households, the jungle-like conditions in the labour market,” referring to labour laws.

Ferries were idle at ports and work stoppages by public transport staff brought traffic chaos to the capital. Some flights were grounded as air traffic controllers had said they planned to join the walkout for six hours.

GSEE, together with public sector umbrella union ADEDY, are demanding an increase in the minimum wage, now at about 713 euros ($717) a month, and the restoration of collective labour law as the high cost of energy and basic goods eat into people’s disposable income.

“I can’t get through the month,” said Voula Pakou, a nurse. “Making it to the end of the month means your wages will last you until the last day of the month. For me, my wages have already been spent after the first 10 days,” she said.

Greece’s conservative government has spent more than 9 billion euros since September 2021 on power subsidies and other measures to alleviate rising costs for farmers, homes and businesses.

It has promised to increase pensions next year for the first time since the country’s financial crisis and raise the minimum wage further.

“They are giving us crumbs to keep our mouths shut,” said Christina Skalouba, one of the protesters. “But it’s not going to happen, because we cannot survive with just these measures.”

One-off additional grant for those living in the mountains