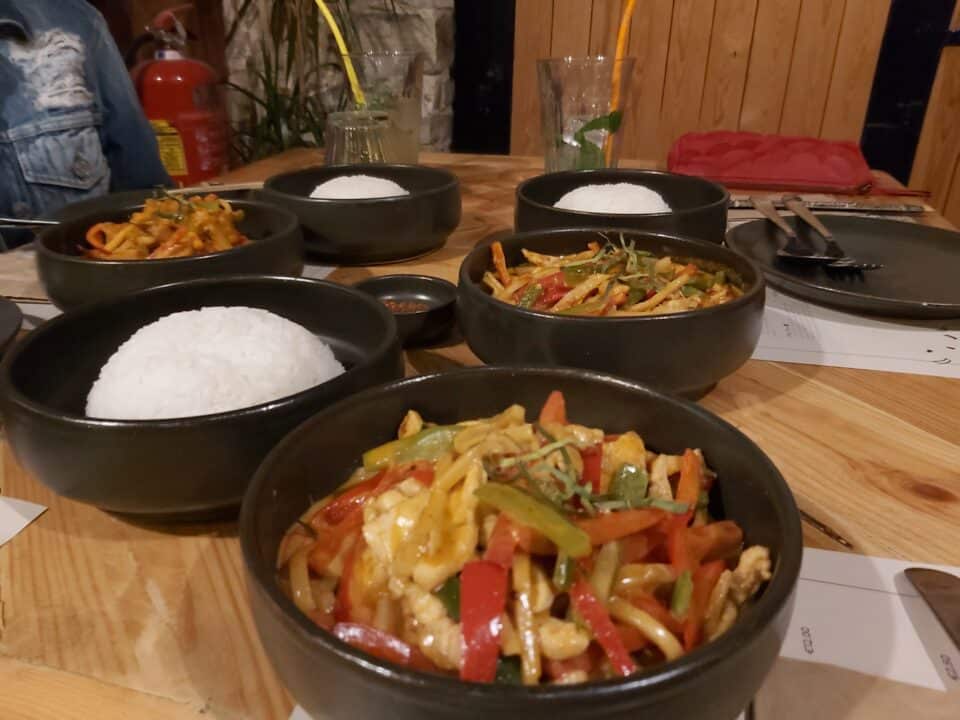 I really enjoy sampling different cuisines and so am always open to recommendations so when my Malaysian colleague mentioned a restaurant that she compared to food back home, I was definitely interested. The same restaurant was recommended a few days later by some friends who likened it to what they had eaten on their many travels to Asia. I was starting to feel like this was fate and I was being called to go!

Wok and Oven is a family run business. The waiters, the people in the kitchen, everyone involved is family. Unfortunately, we were unable to meet Demetris’ parents as they were away in Thailand stocking up on authentic ingredients! But it isn’t a place you would just happen upon, it’s in a small street in Aradippou, and stood out when we were near because of the fairy lights lighting up the window. 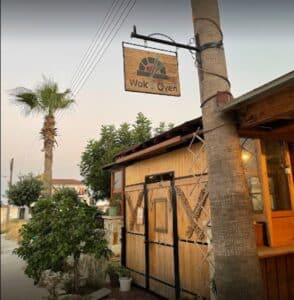 We were greeted by Demetris who showed us to our table. The inside of the restaurant, at first glance, is quite basic. Plain tables and folding wooden chairs. But, stop for a second to look around, and you’ll see authentic designs and artwork on the walls. I’d say that instead of feeling like I was at a restaurant, the place felt homely and relaxing with a friendly vibe.

We ordered an impressive looking drink that was homemade ginger ice tea, with fresh ginger. It tasted as good as it looked.

The clue was in the name of the restaurant as in addition to Thai dishes there is also a choice of pizzas made in the pizza oven, but this is not what we had come for!

For starters, we ordered spring rolls and gyozas – stuffed rice paper pastry – to share. Wok and Oven do theirs with cabbage, carrots, onions, celery and fresh ginger. Three Thai red curries were ordered (Pad Phet), one tofu, spicy; one chicken, mild; and chilli lovers out there will be happy to know that the third was ordered Thai spicy, a different level of heat, if you can handle it. Even though the menu isn’t that extensive, there is still enough variety on it to force you into contemplation about what to order.

When the starters came out, I was impressed by the portion of gyozas but, the spring rolls were a little on the small side if for sharing, it’s more of a one person starter. The gyoza was really good, crisp shell and perfectly good filling. It was steaming hot and the vegetables still had a little bit of crunch to them. Once again, the fresh ginger had a strong presence.

It did take a while for the mains to come out but we hardly noticed as the environment is so comfortable. When the food arrived each curry was served with a generous helping of rice. The thinly sliced bell peppers and bamboo shoots were crisp, the kaffir leaves aromatic and the red sauce was so delightfully creamy, I savoured every mouthful! My partner, who ordered the Thai spicy version was very impressed that they didn’t hold back with the heat. Wok and Oven delivered the promise of Thai spicy.

After we had finished and the table cleared, Demetris came over to ask if we wanted dessert. Initially, we said no but didn’t hold out for long. The banana fritters with crushed almonds and ice cream sounded too good to turn down. Luckily we didn’t order one each as there was plenty for sharing. The banana was perfect. Many-a-time have I had banana fritters and the bananas must have been very ripe as the flavour was overpowering. At Wok and Oven, it was spot on plus, the crispy coating was perfectly done!

I’m extremely pleased that I went to Wok and Oven and I can guarantee that I will return. If you feel like trying a genuine taste of Thai food, head to Wok and Oven, you won’t be disappointed.