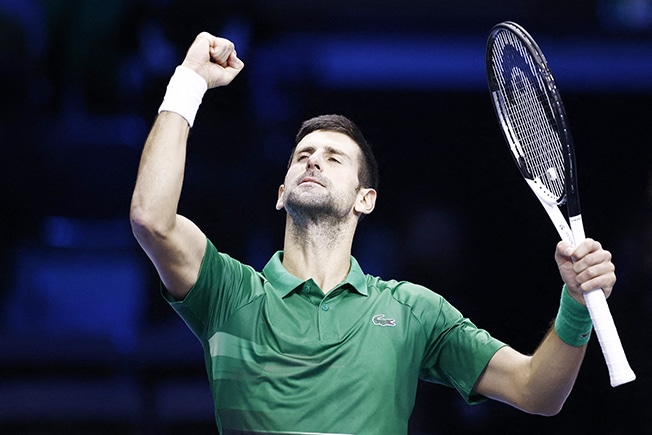 Novak Djokovic continued his dominance over Stefanos Tsitsipas with a 6-4 7-6(4) win after Andrey Rublev battled back to defeat fellow Russian Daniil Medvedev 6-7(7) 6-3 7-6(7) in group stage play at the ATP Finals in Turin on Monday.

Djokovic broke the Greek in the opening game and rode that advantage to capture the first set in a match that came just two weeks after the Serbian beat Tsitsipas at the Paris Masters, a tournament that is also played on indoor hard courts.

Tsitsipas finally got his lone look at a break point opportunity while leading 2-1 in the second set but Djokovic crushed an overhead to erase the danger.

Tsitsipas showed signs of life in the tiebreak when he battle back from 5-1 down to get to 5-4 but Djokovic pounded two precise serves to reach the finish line.

Earlier, Rublev said his sixth career meeting with Medvedev reminded him of his encounter with the world number five at the 2020 U.S. Open quarter-finals, where he lost in straight sets, and the 25-year-old was determined to overcome his poor start.

But having shaken off the disappointment of squandering seven set points in the opener, Rublev hit back with 25 winners in the next two and held his nerve in the deciding tiebreak to seal the victory on his fifth match point.

“I was thinking about the U.S. Open, because when we played in the quarter-finals in 2020 I think I was 5-1 in a tiebreak, also something like 6-2, but I was leading something similar in a tiebreak,” Rublev said.

“But when I lost that set, I couldn’t play anymore, and I was thinking it can’t happen (again) I have to change something. I have to keep playing, because if I win one set, even if I lose in three sets, it’s still good, because here you have a group.

“So you have to fight for every point, every game, and I was able to win. The final tiebreak, the rallies that we had there were crazy. The last rally, we had I don’t know, 30 shots.”

Rublev said he was cramping towards the end of the second Red Group contest before winning a 37-shot rally on match point, after which he dropped to the floor in delight.

“I was thinking ‘one more, one more. You have to keep playing’,” Rublev, who also beat Medvedev in the Cincinnati semi-finals last year, said.

“For sure, he felt the same, ‘so just keep playing if you have the chance, go for it’. In the end I was able to win.”

Djokovic will next play Rublev while Tsitsipas will face Medvedev in the second round of the round robin stage of the season-ending tournament for the world’s top eight players.

Book Review: Didn’t Nobody Give a Shit What Happened to Carlotta by James Hannaham