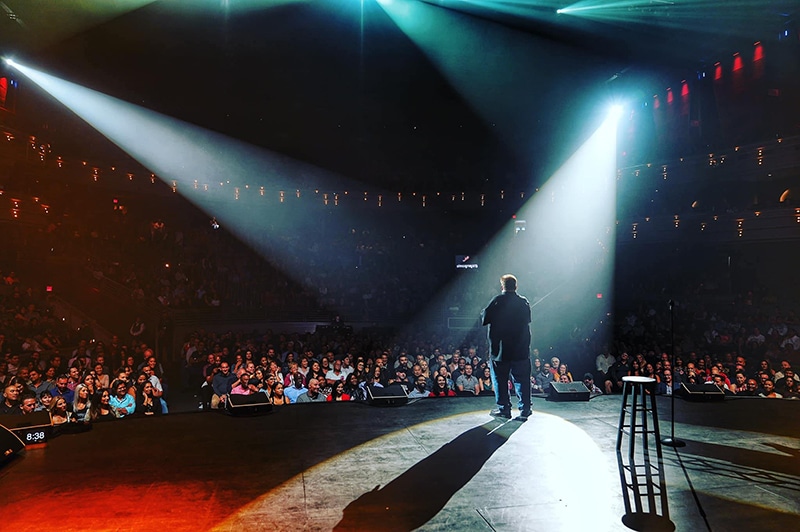 In a ‘funny Greek’ from Canada, PAUL LAMBIS finds a stand-up comedian who has resonated with audiences around the world

Speaking with Angelo Tsarouchas is like conversing with a comedic god from Greek mythology. Everything he does is entwined with his Greek diasporic roots, for which he has a deep fondness.

Tsarouchas, also referred to as the Hitman of Hilarity, is more than just a pretty mobster face. He has performed stand-up comedy in an over-the-top manner around the globe, selling out theatres and delighting audiences. Angelo has an instant likeability and an everyman personality which combines a comfortable yet magnetic presence.

Angelo was recently in Nicosia as part of his current comedy show tour Mythology, which has also taken him to countries including the UAE, Saudi Arabia, England, Ireland, Germany, Greece, USA and Canada.

Mythology tackles a wide range of topics including family, marriage and his father’s desire to live on a planet where only Greek is spoken, is intended for all types of audience, but it will undoubtedly strike a chord with anyone who possesses even a trace of Greek within them.

He enjoys addressing taboo subjects, with his Greek heritage his specialty. Throughout his high-energy and engaging comedy act, Angelo immerses audiences in his own world with his sharp wit, sarcasm, song lyrics, Greek customs, and well-known expressions in everyday Greek that make no sense whatsoever in English.

“When I am addressing a Greek audience with my phrases, there is never any hesitation; however, with a mainstream audience the key is to dial in something that they will ultimately connect to, something that is trending at the moment.”

Born Evangelos Petros Tsarouchas in Montreal, Canada to Greek immigrant parents who are simply known to his fans as Peter and Debbie, Angelo began his stand-up comedy career at Yuk Yuk’s Comedy Club Ottawa. He drew on daily observations, personal experiences in his homelife with his parents, and his ancestral heritage for his material, ultimately emerging as an original voice.

“I made the decision to relocate to London for two years to hone my craft,” Angelos told Living. “The Greek Cypriot community in London was incredibly friendly to me and brutally honest at the same time.”

The vibrant comedy scene in Britain, according to Angelo, gave him the chance to perform frequent gigs, leading to him becoming known as “the funny Greek from Canada.”

After establishing himself as a world-class comedian, including taking part in prestigious comedy festivals and performing at comedy clubs all over the world, Angelo entered the movie industry. He has since appeared in Hollywood blockbusters alongside actors like Al Pacino, Colin Farrell, Denzel Washington, Julia Stiles, Eric Roberts, Jim Belushi and Pat Morita, among others, and has made special guest appearances on TV shows such as Mad Men, Sullivan & Son and Blue Mountain State.

However, stand-up comedy is his true passion, and when he is performing in front of a live audience, Angelo shines brightly under the spotlight that accompanies him on stage.

He has a significant fan base that numbers more than ten million people, especially online. His YouTube videos frequently go viral, and his Amazon Prime Video special, Bigger is Better, is one of the most popular international stand-up comedy series of all time, following Angelo on his journey growing up Greek in a Western World.

“My mother taught me the meaning of ‘filotimo’, the virtue of doing good with no expectation of reciprocation,” he said. “My father, on the other hand, taught me how to be fearless, just like the Spartans who were relentless in battle.” Angelo acknowledged that these life lessons have helped him along the way in every facet of his life, even at his lowest point when his first marriage ended in divorce and he was on the verge of bankruptcy.

It is clear from listening to Angelo’s life stories, experiences, beliefs and opinions, often accompanied by witty comments, as well as his current and upcoming projects, that he loves comedy and takes great pleasure in being relatable to everyone around him, including his listeners.

“You should occasionally take a bite out of life,” he advised. “So many individuals are afraid to take chances. I am the one who tells people, ‘Do it!’ especially when they tell you that you can’t.”

Teacher accused of sexual abuse on remand but not suspended