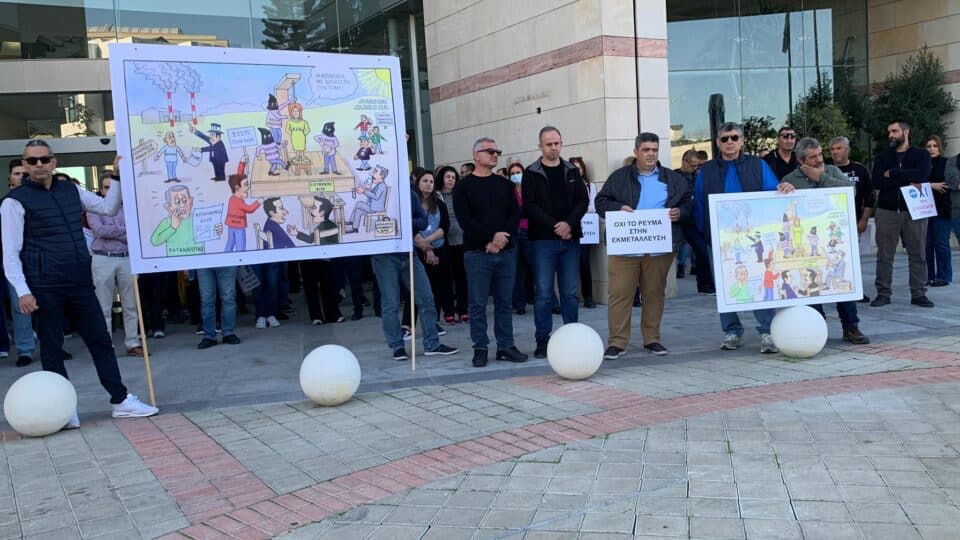 Despite efforts by the EAC board of directors to prevent trade unions from proceeding with strike measures, dozens of workers gathered outside the EAC central offices at 7am on Wednesday. They were protesting what they say is the indifference of authorities on issues that threaten the viability of the organisation and affect consumers.

Customer service centres across the island remained closed for the day. However, the trade unions exempted staff working for emergency services to repair any damages that may occur.

Commenting on the strike, Finance Minister Constantinos Petrides said it “creates an unnecessary inconvenience” and noted that the government is taking steps to smooth out the situation.

Regarding a core union demand about the opening up of some 370 job positions, including mechanics and network specialists, Petrides said the finance ministry’s budget, greenlighted 146 positions.

This “fully satisfies the staffing needs of the EAC in accordance with our analysis and that of the energy ministry,” he said, adding that the opening of more positions will increase operating costs and electricity bills.

“The continuous creation of new posts is neither the only nor the ideal answer to the problems related to the workload,” the minister said. Instead, the government recommended digitisation and interconnection of procedures and intensive training of existing staff in new technologies.

Another request from the unions concerns their insistence on maintaining a monopoly on the inspection of electrical installations, but also on the devaluation of the ability of other companies and/or organisations to offer similar services. This underestimates the abilities of entrepreneurs and makes it difficult to do business in a difficult period he said.

Renewable energy sources are also a source of contention, as unions support that any interference by other state services should be scrapped so EAC can diversify its energy offerings and reduce the cost of production. This will translate to cheaper electricity for consumers, head of Epopai trade union Kyriacos Tafounas told the Cyprus News Agency.

It is untrue that EAC networks were not ready to accept RES, he said.

“This myth was debunked by the statements of the energy minister herself, who made it clear that we have exceeded the targets set by the state in terms of RES penetration which reached 17 per cent.”

But Petrides said the electricity authority can expand activities in RES provided this is done in parallel with the gradual withdrawal of old and polluting supply plants and development of electricity grids to allow third-party involvement in RES generation. This is vital to enhance competition for the benefit of the consumer thus liberalising the market, Petrides said.

The Dhekelia power plant is an additional sticking point, with the union claiming it is being mishandled, demanding the outdated and cost-inefficient units be upgraded.

“We are bound into polluting and expensive conventional fuels,” Tafounas said, adding that they sent a letter requesting the energy ministry to proceed with actions to exclude Dhekelia’s power plant from emission fees.

Denying any alleged inaction on the issue, Petrides said the government is taking all necessary steps while fully respecting the autonomy of the organisation.

Tafounas also raised the issue of the control of electromechanical installations, which should be assigned to a different authority that has no interest beyond ensuring the safety of the facilities.

The union also disagrees with the new pension scheme and wishes to be exempt, but Petrides said there are legal obstacles.

“The bill relating to the new pension plan is of universal application and, as a result, it is not possible to exclude a specific group of employees from its scope.

To better demonstrate the issues, some of the protestors were holding a large poster showing a cartoon depicting the energy and financial ministries as well as the energy regulatory authority (Cera) as hooded hangmen ready to kill the electricity authority, depicted as a woman.

The board of directors of EAC are shown sitting drinking coffee while private electricity suppliers are next to a photovoltaic park holding bags of money. An officer is fining a man wearing a T-shirt reading ‘Cypriot’ to explain how citizens are paying for the emission fines.

Meanwhile, the striking EAC trade unions are depicted in the picture as a man wearing a red T-shirt holding a sign reading “Save EAC”. A distressed consumer is also shown holding an electricity bill.

In an effort to prevent the strike and inconveniencing the public, the EAC board of directors called the four trade unions and organisers of the strike to a meeting on Tuesday. However, no common ground was found resulting in over 90 per cent of the company’s employees striking on Wednesday.

Earlier this week, one of the five trade unions of the electricity authority’s workers said it will not participate in the strike organised by the four other unions saying it failed to receive detailed and official reasons and purposes for the work stoppage.

“Efforts are continuing and there is an open dialogue between the management and the trade unions,” EAC spokeswoman Christina Papadopoulou said.

The union complaints come as the industry is set for a significant shakeup – although the ever-elusive date for opening up the electricity market appears to have been pushed back to 2023.