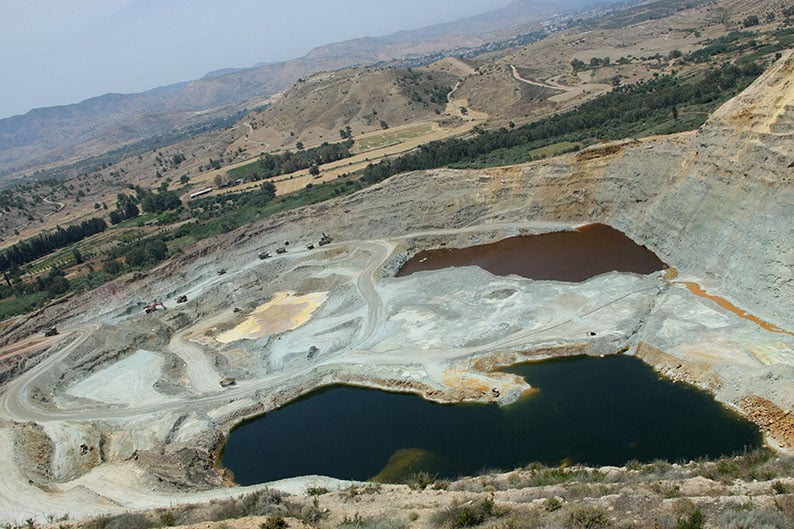 The copper mine at Skouriotissa

Cypriot mining company Venus Minerals board member and economic geologist Demetrios Constantinides earlier this week said that Cyprus can use modern tools to recover critical minerals from its mine tailings.

In mining, tailings refer to the materials left over after concluding the process of separating the valuable portion from the uneconomic portion of a mineral ore.

“New technology can enable economic recovery of important metals from mining waste created decades ago, both improving resource efficiency and contributing to CO2 reduction and also facilitating the rehabilitation of abandoned mine sites across the island,” Constantinides said.

Constantinides explained that Cyprus is a country with a mining history spanning at least 5,000 years, historically generating over $10 billion in today’s prices.

In addition, the island also has a rich aggregates production history with its 25 quarries known for their high-quality diabase, limestone, and other mineral products.

“As a result, the island has been left with many waste sites, presenting us with an opportunity for a holistic restoration and recovery,” the geologist stated.

“Among other benefits, a holistic approach can contribute to the recovery of metals and useful materials from mine tailings and waste, which could help meet increased demand, reuse of valuable resources, raise the value of otherwise unused materials, eradicate environmental hazards and recultivate the land,” he added.

According to the Geological Survey Department, at least 11 areas have been identified where state-of-the-art technological solutions and tools could facilitate the economic recovery of metals and rehabilitate those sites to modern verifiable standards.

Constantinides explained that these “anthropogenic” deposits are Venus Mineral’s next target, noting that replacing primary with secondary metals would allow for CO2 savings ranging between 29 and 96 per cent, while also helping to improve resource efficiency.

For instance, Constantinides said, at the company’s Magellan project, which involves sites at Kokkinoyia, Klirou and the New Sha areas in the north-eastern foothills of Troodos, Venus Minerals plans to recover valuable metals from mining waste created during the 19th century.

He noted that the Kokkinoyia dumps alone host at least 300,000 tonnes of material, while also referencing tests revealing that their average content is equivalent to the higher-grade copper found at the Apliki mine.

“This material could be treated locally or transported safely for processing to the installations at Apliki,” Constantinides stated.

Moreover, in the Mavrovouni area, according to research carried out in 2003, it has been estimated that 7 million tonnes of material have accumulated in tailing ponds and waste dumps.

“Today it is not sufficient or acceptable to extract only one particular and perhaps critical element that is present as a minor metal, and which has low concentration, or in a complex mixture from these sites,” Constantinides said.

“Instead we can now aim to recover other target metals and materials which can be applied to a much wider range of uses,” he added.

What is more, the Venus Minerals board member noted that these resources should therefore be appraised to determine their composition whenever possible.

“Clearing historical mining waste can also free and clean land that can be used for recreational and outdoor activities, industrial, or urban redevelopment including commercial
Activities,” he said, noting that one area where all the above could be realised is the Terra Banensium site of Mitsero-Agrokipia.

“Venus Minerals is prepared to work with all parties involved, with the aim of cleaning up as many abandoned mines as possible, through the recovery of metals and other useful materials, reclaiming otherwise lost land that could be used for other purposes,” Constantinides concluded.