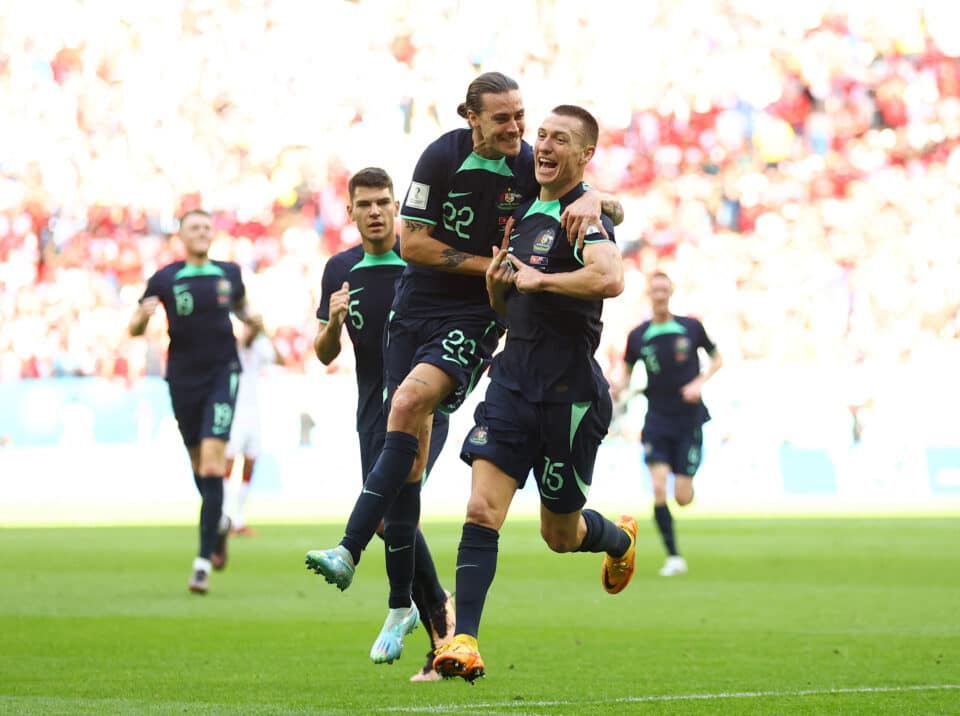 A Mitch Duke header gave Australia their first World Cup victory in 12 years with a 1-0 win over Tunisia in a hardfought contest on Saturday that kept alive their hopes of progressing from Group D.

Target man Duke scored in the 23rd minute with a glancing header that flew past keeper Aymen Dahmen’s despairing dive, and the Socceroos then held back a largely toothless Tunisian attack over the remainder of the contest.

The victory, only the third for Australia in six visits to the World Cup finals, was the perfect response to their 4-1 drubbing at the hands of France at the same Al Janoub Stadium on Tuesday.

Australia moved to three points in the group, level with world champions France who could secure their place in the last 16 with a victory over Denmark later on Saturday.

“I’m hugely proud of the boys. They showed Aussie fighting spirit. They were in their faces all the time and I’m sure they made the nation very proud,” said Australia coach Graham Arnold.

“The other night we played against the current world champions and the boys showed the same effort today. When the doubters hate us, bring it on.”

Tunisia, who opened their campaign with a 0-0 draw against Denmark, now face a Herculean task if they are to get into the knockout stages of a World Cup for the first time with their last group fixture being against France.

“I think today we should have played to win. We still have one match to play and we will play with our hearts out.”

Tunisia, roared on by a vast army of red-shirted compatriots, made clear their intentions from the start, ranging five defenders and two holding midfielders across the pitch and inviting the Australians to try to break them down.

Australia had some success getting the ball down the flanks but the final ball into the area rarely got anywhere near a blue shirt as the Tunisian defenders wrapped up the Socceroos forwards.

Craig Goodwin’s cross from the left looked to be heading the same way until it took a hefty deflection off a Tunisian defender and looped to Duke, who caressed it into the far right corner of the net.

The goal was the first conceded by Tunisia against any team barring Brazil in their last 11 matches and forced the Tunisians to come out of their defensive shell.

Defender Mohamed Draeger and skipper Youssef Msakni had chances just before the break but Harry Souttar blocked the first and the second flashed past the post.

Australia kept compact in the midfield, where the outstanding Aaron Mooy ran the show for the Socceroos, and Tunisia were reduced to punting long balls to the wings.

Tunisia brought on the squad’s top scorer Wahbi Khazri in the 68th minute as they upped the tempo in search of an equaliser, but the Australian defence stood firm with goalkeeper and skipper Mat Ryan a calming presence at the back.

Naim Sliti broke free of the defence with only minutes left on the clock but Souttar stormed across the pitch to put in a crunching last-gasp tackle.

The victory snapped Australia’s seven-match winless run at World Cups since they last picked up three points in a victory over Serbia in 2010. They play Denmark in their final group match on Wednesday.