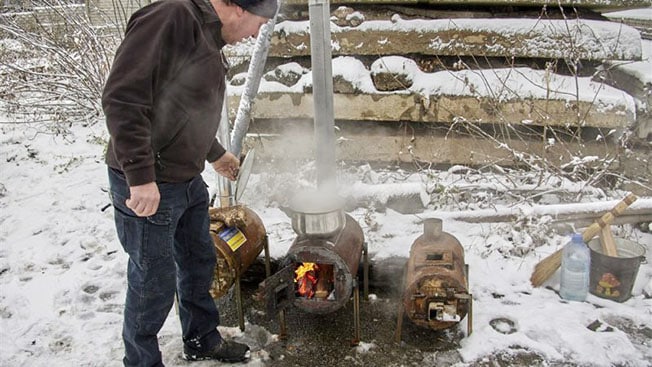 Moveable wood stoves for the Ukrainian Army are tested post production in preparation for winter, in Kharkiv

Ukraine’s General Staff said on Wednesday its forces had repelled six Russian attacks in the past 24 hours in the eastern Donbas region, while Russian artillery had relentlessly shelled the right bank of the Dnipro River and Kherson city further south.

Ukrainians on Tuesday fled for bomb shelters after air-raid warning sirens, although the all-clear later sounded across the country. In the eastern Donetsk region Russian forces pounded Ukrainian targets with artillery, mortar and tank fire.

Zelenskiy said the Russian military was also attacking in Luhansk in the east and Kharkiv in the northeast, the latter an area Ukraine recaptured in September.

“The situation at the front is difficult,” Zelenskiy said in his nightly video address. “Despite extremely large losses, the occupiers are still trying to advance” in Donetsk, Luhansk and Kharkiv. And “they are planning something in the south,” he said.

Ukraine regained control of Kherson in the south this month after Russian forces retreated. Reuters could not independently verify the battlefield reports.

Foreign ministers from the NATO alliance, including U.S. Secretary of State Antony Blinken, began a two-day meeting in Bucharest on Tuesday, seeking ways both to keep Ukrainians safe and warm and to sustain Kyiv’s military through a coming winter campaign.

“In a nutshell: Patriots and transformers are what Ukraine needs the most.”

Former Russian president Dmitry Medvedev warned NATO against providing Ukraine with Patriot missile defence systems and denounced the Atlantic alliance as a “criminal entity” for delivering arms to what he called “Ukrainian fanatics.”

NATO Secretary-General Jens Stoltenberg said Russian President Vladimir Putin was “trying to use winter as a weapon of war” as Moscow’s forces lose ground on the battlefield.

U.S. and European officials said ministers would focus in their talks on non-lethal aid such as fuel, medical supplies and winter equipment, as well as on military assistance. Washington said it would provide $53 million to buy power grid equipment.

U.S. President Joe Biden said providing more military assistance for Ukraine was a priority, but Republicans, who take control of Congress’ House of Representatives in January, have talked about pausing the funding, which has surpassed $18 billion.

Russia has launched huge attacks on Ukraine’s electricity transmission and heating infrastructure since October, in what Kyiv and its allies say is a deliberate campaign to harm civilians, a war crime.

In Kyiv, snow fell and temperatures were hovering around freezing as millions in and around the capital struggled to heat their homes. An official with the power company said on Facebook that 985,500 customers in Kyiv were without power, and another electricity provider said the city would have emergency power cuts on Wednesday.

In a brief posting on Telegram, Kherson region Governor Yaroslav Yanushevych said on Tuesday electricity had been restored to half of the city of Kherson.

Ukrainian forces struck a power plant in Russia’s Kursk region on Tuesday, causing some electricity outages, Roman Starovoyt, the governor of the region, said on the Telegram messaging app.

Early on Wednesday a large oil storage tank was on fire in Russia’s Bryansk region bordering Ukraine’s northeast, a local governor said. There were no reported casualties, he added, without commenting on the cause of the blaze.

Moscow says hurting civilians is not its aim but that their suffering will end only if Kyiv accepts its demands, which it has not spelled out. Although Kyiv says it shoots down most of the incoming missiles, the damage has been accumulating and the impact growing more severe with each strike.

A senior U.S. military official said on Tuesday that Russia was firing unarmed cruise missiles that were designed to carry nuclear warheads at targets in Ukraine to try to deplete Kyiv’s stocks of air defences.

The worst barrage so far was on Nov. 23. It left millions of Ukrainians shivering in cold and darkness. Zelenskiy told Ukrainians at the start of this week to expect another soon that would be at least as damaging.

There are no political talks to end the war. Moscow has annexed Ukrainian territory which it says it will never relinquish; Ukraine says it will fight until it recovers all occupied land.