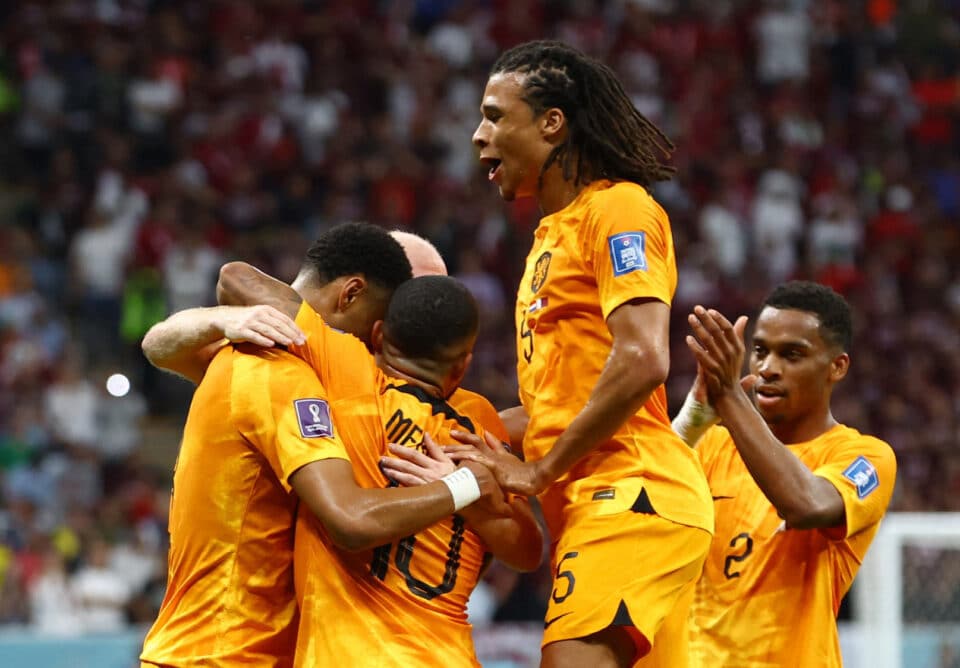 Netherlands players celebrate after the first goal of the match

Cody Gakpo netted his third goal in three games as the Netherlands comfortably beat World Cup hosts Qatar 2-0 at the Al Bayt Stadium on Tuesday to secure top spot in Group A and advance to the knockout stages.

The Dutch, who finished with seven points from their three group games, will be joined in the last 16 by Senegal, who knocked out Ecuador by beating them 2-1 to end up second on six points.

The Qataris had been eliminated after their 3-1 loss to Senegal and despite huge investment in state-of-the-art facilities to host the World Cup, they came up short again on the pitch.

They were not without their moments in a dull first half, forcing a couple of corners and threatening on the edge of the Dutch area, but no sooner had they bared their teeth than they were hit with a gut-punch of a goal by Gakpo.

Davy Klaassen played an inviting ball into the path of the 23-year-old and he received it at pace, slicing through the heart of the defence before dispatching a well-placed shot past Meshaal Bersham to open the scoring in the 26th minute.

Four minutes into the second half the Dutch struck again as a cross from Klaassen made its way to Depay and the Qatari defence was caught ball-watching as his shot was saved, allowing Frenkie de Jong to bundle it into the net.

With Qatar lacking the quality to mount a comeback, the Dutch had a goal ruled out after Gakpo was judged to have handled the ball in the build-up, but they still coasted to victory.

The final whistle signalled the start of the short wait for the Dutch to find out which of the Group B teams – England, Wales, Iran or the United States – they will meet in the last 16.

Asian champions Qatar will go back to the role of tournament hosts and plotting the future of the game in their country.

In the other game of the group, winger Ismaila Sarr kept his cool to score a first half penalty and captain Kalidou Koulibaly netted a second goal as Senegal beat Ecuador 2-1 at the Khalifa International Stadium on Tuesday to earn a place in the last 16..

Sarr scored his penalty in the 44th minute having earned the spot-kick himself, but Ecuador, who needed only a draw to reach the knockout rounds, equalised through Moises Caicedo.

That joy for the South Americans lasted only three minutes though as Koulibaly restored Senegal’s lead, which they were able to hold onto for the remainder for the match.

The African champions finish second in the group with six points from their three matches, one behind Netherlands and two ahead of Ecuador, whose tournament held much promise but has ended in bitter disappointment.

The beating of African drums was constant in the stadium as was the effort and endeavour of Senegal, who dominated the opening period against an opponent happy to sit back and try to soak up the pressure.

Idrissa Gana Gueye fired wide early and Senegal striker Boulaye Dia had a superb chance when he had a clear sight of goal, but skewed his shot wide of the far post.

The decisive moment in the half came late on when Sarr was ploughed into by Ecuador defender Piero Hincapie and picked himself up to convert the spot-kick, leaving goalkeeper Hernan Galindez rooted to the spot as the shot nestled in the bottom corner.

The flow of the game changed in the second period as it was Senegal who were happy to sit back and a desperate Ecuador pressed for the equaliser.

It arrived on midway through the half when Felix Torres flicked on a corner and Caicedo was unmarked as the back post to provide a simple finish. He is the first player other than Enner Valencia to score at the World Cup for Ecuador since Ivan Kaviedes in 2006.

The sizeable Ecuador support in the stands erupted in celebration, but that was halted shortly afterwards when Senegal struck again.

The South American side failed to clear a corner and the ball fell kindly for Koulibaly to volley into the net from six yards.