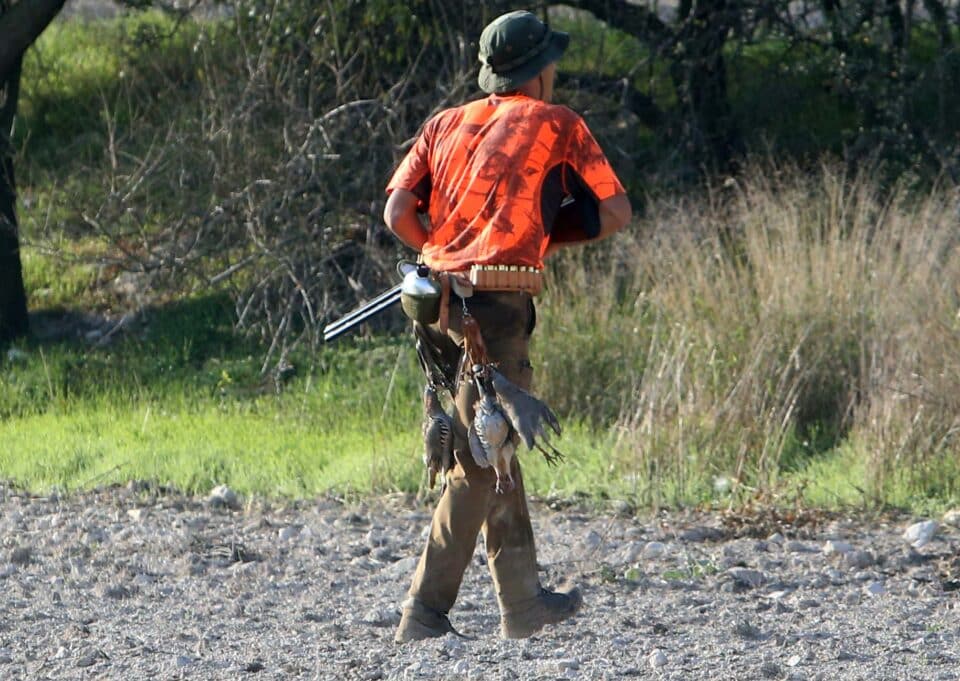 I never thought I’d spend my Sunday talking with hunters. Hunting is an alien concept to me. Why anyone enjoys shooting animals, when there is no pressing need for nourishment, I cannot understand. However, being somewhat of a live-and-let live type, I haven’t had cause to campaign against hunting. After all, bungee jumping is also not my cup of tea, but I don’t go around talking others out of it or railing against enthusiasts.

That was the situation until recently. Until I decided to exchange city life with life in the sticks, and as my first gleeful ‘back-to-nature’ act, acquired stewardship of a little flock of chickens.

My ‘girls’ are intended to be free range – the only proper way for a chicken to be kept – and since the acquisition I have taken great delight photographing them pecking daintily through grass and daisies, taking dirt baths under the carobs and sheltering from rain up in the apricots. Ahh the idyll of country living. 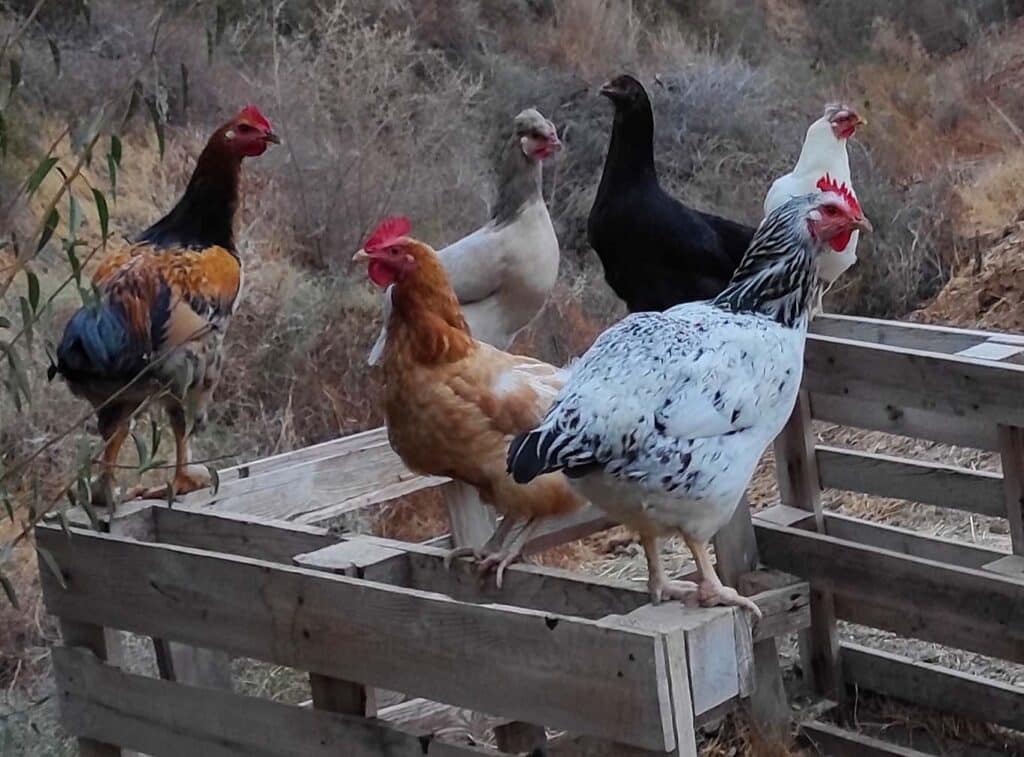 So how did it happen, that fast-forward two and a half years later and I am standing in my dressing gown and slippers, at 6:05am halfway up a hill, letting rip at a somewhat taken-aback looking young man in camouflage?

Well, it happened like this…the first time I heard the goat bells at 6am on a Sunday, I propped myself up in bed to look through the window, thinking this was actually rather sweet (despite the rude hour) and expecting to see just that: goats. Imagine my surprise then when instead of goats I saw, dogs, lots of dogs, trotting all over just metres near my house.

A few bleary-eyed stupid moments and a couple of gunshots later, it dawned on me that this was in fact a herd of ten dogs, accompanied by hunters. And so began my unwilling close contact with the unfathomable hunting scene on the island.

Being half-Cypriot, I grew up with a father who hunted. Hunters I have known, went out in small groups, often in pairs, because a bigger group would scare away prey, mainly wild hare. They did not have packs of dogs to do their work for them. They covered long distances on foot. They often came back empty-handed. It’s hard to draw firm conclusions from a child’s memory bank but it seems to me these were saner times and ways.

In the European-wannabe Cyprus of 2022, laws regulate what is and is not permissible. The game service’s ‘Hunter’s Handbook’, (whose cover romantically depicts a lone hunter and his hound), offers solid advice, a generous smattering of the word ‘respect’, and philosophical bits on “what it means to be an honourable hunter”.

And yet hunters are generally perceived as a seasonal nuisance at best, as thugs at worst, stories abound of shot birds which are inedible and/or endangered or migratory, or all of the above, and 90 per cent of animal mistreatment complaints have to do with hunters.

Despite all this, I was only thrown into direct confrontation after losing chickens to a stray hunting dog for the tenth time in two years.

On that particular Sunday, having returned from a visit to town the day before (Saturday afternoon – not even a hunting day) to find the torn-to-shreds carcass of one of my birds, guts spilling out, feathers everywhere, things knocked over and all the birds missing, and having had to comfort a wailing nine-year-old while feeling quite close to wailing myself, I had had enough.

And that is how Sunday morning found me, oblivious to how wild and witch-like I must appear, marching up to the first hunting group of the day and demanding that they bugger off and take their dogs with them, followed by a barrage of angry, rhetorical questions to the baffled-looking, shotgun-toting young man.

Up above a lout of maybe 19, yelled at me that “I had a nerve” and the only reason he wasn’t coming down to slap me was because I seemed older than him. I wasn’t even sure precisely how to be offended by this belligerent missive.

While I stood catching my breath, the first young man yelled up at his companion, apparently his brother, to shut up and take the dogs up higher and turned to me. And then the unimaginable happened.

“Akou (listen),” he started, “I understand you’re angry about what happened yesterday, and rightly so, but it wasn’t me who did it. Also,” he carried on, directly meeting my eyes, “let me give you some friendly advice…”

My alien adversary proceeded to tell me that he had just witnessed another hunter shooting turtle doves next to my house, that he was not “that type”, he loved animals, he was a conscientious person, he was sorry and I would “never see his group” near the house again. And then came the clincher: “Also, I advise you, if you want anything done, don’t bother with the police, they will do nothing. Your best bet it to just go up to the hunters – there are five bands of us in all – and speak with them, politely,” (my eyes nearly popped out of my head at this), “and ask them to keep a distance.”

We parted ways by introducing ourselves, as custom still dictates in these parts, me gruffly, blinking at the absurdity of it all, and I walked down the hill to take it all in over serial cups of coffee.

I eventually did spend my Sunday speaking to every hunter whose dog or person came within less than the permitted 200 metre of a dwelling range. I stayed civil, with some effort. Two apologised, assuring me they would stay away, two others merely headed off, one grumbling that hunters had “no area” left. 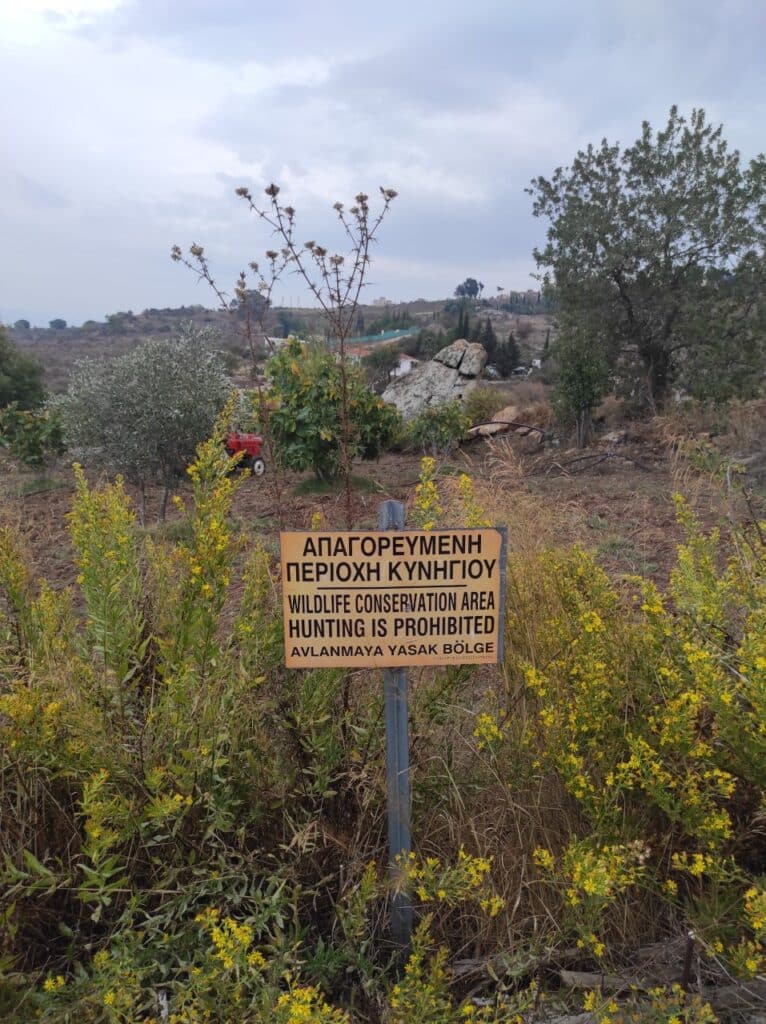 The net outcomes of this experience have astonished me. Digging into things, I learned that hunters in Cyprus are legally allowed to take along four dogs; the game service website hosts a poster of permitted “prey without limits” which includes, among other oddities, magpies. The training of dogs is big business, and a hunting dog may cost upwards of €4-5,000. A game service operated breeding facility in Stavrovouni, annually releases 80,000 partridges into hunting areas some weeks before season’s start. The birds are hardly wild, (a spokesperson for BirdLife NGO compared them to chickens, which explains parts of my personal tribulations).

Several people I spoke with, including the hunter who gave me friendly advice, agreed that hunting must be done properly, regulations enforced, and there are several reasons enforcement is hindered – understaffing, the fact that hunters must be caught red-handed to be booked, authorities not coordinating operations. The website of the game service urges hunters to self-police each other, which smacks partly of naïveté and partly of a weird kind of piety.

Troublingly, both a hunter, as well as a game service rep, off-the-record cautioned me not to become “known”, “for my own sake,” which added a ludicrous mafia undertone to an already surreal scenario. Goodness, I am just a middle-aged woman, protecting her chickens, wishing to sleep in on Sundays!

Now, to the most pertinent part: did the hunters I spoke with politely, in fact honour their word, did they stay away? Drumroll…yes, they did. At least thus far.

And so, a small part of me is encouraged to think that maybe, just maybe, some decency can yet be found on this troubled island. Perhaps one can dare hope, that even in the most alien-feeling encounters of public cross-paths and cross-purposes, small victories might be won if only that hard-to-legislate, elusive thing called human connection, can still be kindled.