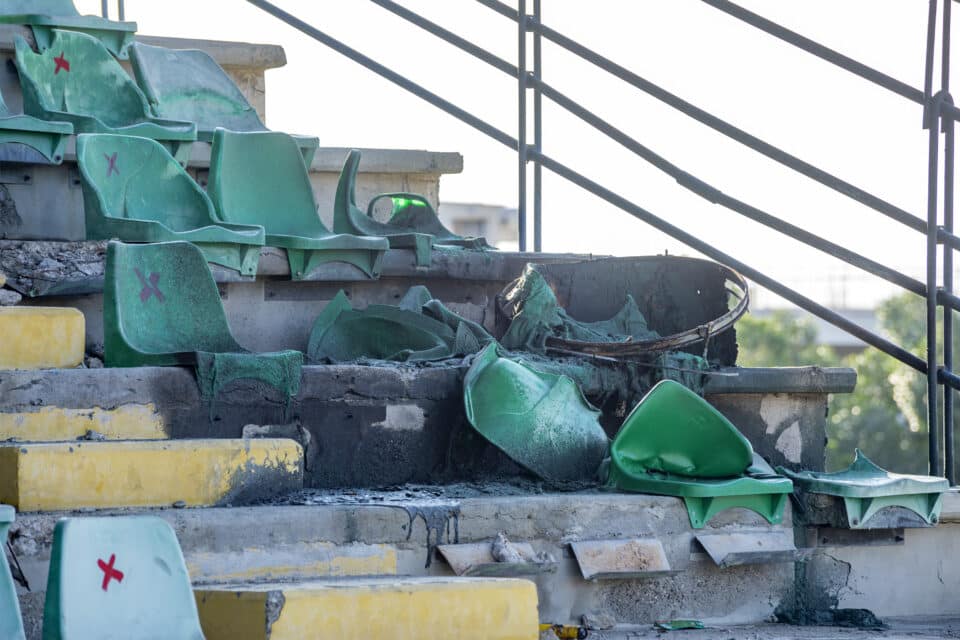 Wreckage left behind by the fans

AEL lashed out at police on Monday over the decision to postpone a derby with Apollon citing safety reasons after football fans started throwing rocks and firecrackers on the pitch.

The incidents at Tsirio stadium led to the injury of an officer on Sunday night, while fans also destroyed plastic seats and damaged the concrete bleachers.

Amidst investigations to identify those who initiated the violent incidents, Apollon blamed AEL fans for the trouble.

“We experienced unprecedented events for the Cypriot football,” said Apollon’s board of directors in a written statement. They claimed that AEL fans had thrown Molotov cocktails against their players who were warming up “which fortunately did not explode”, while they also broke up pieces from the cement bleachers and threw them.

Apollon highlighted that it would not allow anyone to equate the behaviour of the fans of the two teams nor to ‘distort the actual facts’.

For its part, AEL also condemned Sunday’s incidents, but said the decision to postpone the match was wrong.

“We believe that the decision by the police not to provide security for the referee of the match was wrong and uninformed,” the team said. AEL further claimed that the police’s decision ‘concealed other intentions’ and said it will contest the match because points must be won on the pitch and not through ‘strange admonitions and decisions’.

Police said that troubles started before the match was expected to start at 7pm. During checks at the entrance, they arrested a 20-year-old who was caught with three torches in his possession.

Then, shortly after 6 pm, AEL fans threw firecrackers in the pitch damaging stands and seats, while during the departure of the Apollon players after their warm-up, they threw concrete chucks from the damaged stand.

Police called officials of the two teams to the operations centre and after showing footage of the incidents on CCTV, jointly informed the referee that for safety reasons the match could not go ahead.

Upon hearing the announcement, fans of the two teams started throwing firecrackers and lit torches into the playing area, while in the AEL stand a pile of seats that had been removed earlier were set on fire. The fire was extinguished by the fire service.

Later, shortly after of 8pm outside the stadium, fans of both teams attacked police with stones, molotov cocktails and flares. Police said they used teargas and the water-cannon ‘Aiantas’ to regain control.

One officer was hit by a flare and was taken to Limassol general hospital where he was treated for a burn on the chest. He was provided first aid and discharged.

Elsewhere departing fans of the two teams damaged four cars parked in the vicinity of the by throwing Molotov cocktails, flares and stones. They also damaged three properties, including a betting shop, and set fire to three rubbish bins which were destroyed.

The owner of the betting shop told the media on Monday that football fans had entered and set fire by throwing a Molotov cocktail at the property. The fire was put out by his employee using a fire extinguisher.

Responding to criticism over how police failed to intervene to enforce order so that the match could take place, Andreou said police were only trying to protect the fans, including children who were present.

Police’s role should be enhanced so there is control over such incidents, Health Minister Michalis Hadjipantela said in his own comments as a football fan.

“At the moment, the hands of the police are tied…When they use a little violence, the next day there is a fuss in the media,” Hadjipantela told AlphaNews.

Decisions must be taken and “give the police the power to enforce the law” instead of punishing the fans who want to watch the game, he added.