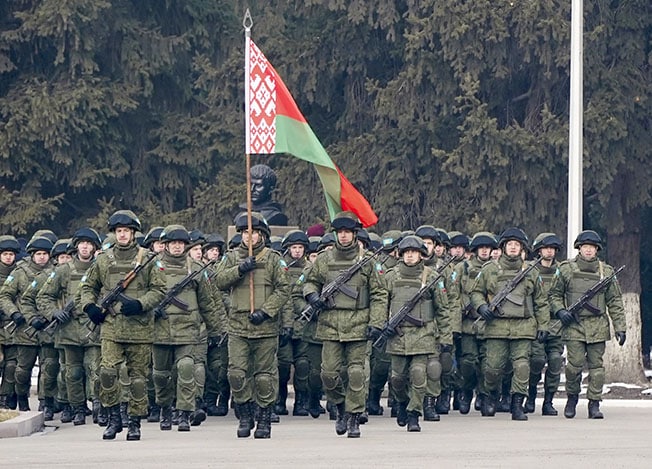 President Alexander Lukashenko has allowed Belarus to serve as a staging ground for Russia's invasion of their neighbour, but has so far kept his own army from joining it

Russia’s ally Belarus said on Wednesday it was moving troops and military hardware to counteract what it called a threat of terrorism, amid signs Moscow could be putting pressure on its loyal client to open a new front in the war against Ukraine.

President Alexander Lukashenko, who relied on Russian troops to put down a popular revolt two years ago, has allowed Belarus to serve as a staging ground for Russia’s invasion of their neighbour, but has so far kept his own army from joining it.

But recent weeks have seen increasing signs of involvement in Belarus from Moscow, culminating on Saturday when Russia’s Defence Minister Sergei Shoigu flew unannounced to the capital Minsk. He and Belarusian counterpart Viktor Khrenin signed ammendments to the two countries’ security cooperation agreement, without disclosing the new terms.

Thousands of Russian troops have been deployed in Belarus since October, Ukraine says, and Belarus authorities have increasingly spoken of a threat of “terrorism” from partisans operating from across the border. Lukashenko has ordered his military to compile information about reservists by the end of this year.

In the latest move, on Wednesday, the Belarus Security Council, quoted by state news agency BelTA, said troops and hardware would be moving in the country over the next two days. Access to some roads and transport links would be restricted, and imitation weapons would be used for training, it said.

It gave no details about the number of troops or types of hardware that would be moved, the location of roads and transport links that would be shut, or of the nature of the training exercises. Residents in the capital Minsk said there were no outward signs of unusual activity there.

In the past, some Western diplomats have been skeptical that Belarus would join the war, noting that it had a comparatively small military, and that Moscow would be wary of provoking public opposition that would weaken Lukashenko for little gain.

Ukrainian officials have also said they think Russia did not have enough troops in Belarus to assault from there yet, and action near the border could be intended instead as a decoy.

The Institute for the Study of War think tank said this month it believes Belarus is conducting an “information operation aimed at fixing Ukrainian forces on the border”.

But some analysts say the flurry of activity in recent weeks could also be a genuine sign Belarus might send troops.

“Belarus has actually been preparing to join the war on the Russian side for a few months. Every capability that they would need to go to war has been tested,” Konrad Muzyka, a Belarus expert with Poland-based defence think-tank Rochan Consulting, told Reuters, describing drills on mobilising troops and even running the post office in war time.

“We cannot exclude the possibility that a decision has been made that Belarus could join the war. I don’t know whether this has happened, but from a military indicators point of view, everything is pointing towards Belarusian armed forces taking a more belligerent stance.”

Within Ukraine, officials were working on Wednesday to restore power after damage in the latest barrage of Russian missile strikes, launched on Monday hours after apparent Ukrainian drone strikes on two airbases deep inside Russia.

Ukraine has not directly claimed responsibility for the drone strikes but has celebrated the apparent demonstration of newfound capability to penetrate hundreds of kilometres into Russia’s air defences.

Russia launched its “special military operation” in February saying Ukraine’s close ties with the West posed a security threat. Kyiv and its allies say the invasion was an illegal war of aggression. Tens of thousands have died in the war, including at least 6,700 civilian deaths counted by the United Nations. Russia denies intentionally targetting civilians or committing atrocities on occupied territory.

In the latest international documentation of such allegations, the U.N. human rights office released a report on Wednesday detailing 441 civilians it said were killed by Russian forces in executions and attacks early in the war in the northern Kyiv, Sumy and Chernihiv regions.

The actual number of victims in the three regions was likely to be much higher, the Office of the High Commissioner for Human Rights (OHCHR) said. The report looked at the period from the invasion’s start on Feb. 24 until early April, when Russian forces were driven from those areas.

The Russian foreign and defence ministries did not immediately respond to requests for comment.

Many of the bodies documented in the new report bore signs that the victims might have been intentionally killed, the report found. As of the end of October, OHCHR was still trying to corroborate an additional 198 alleged killings of civilians in the three regions.