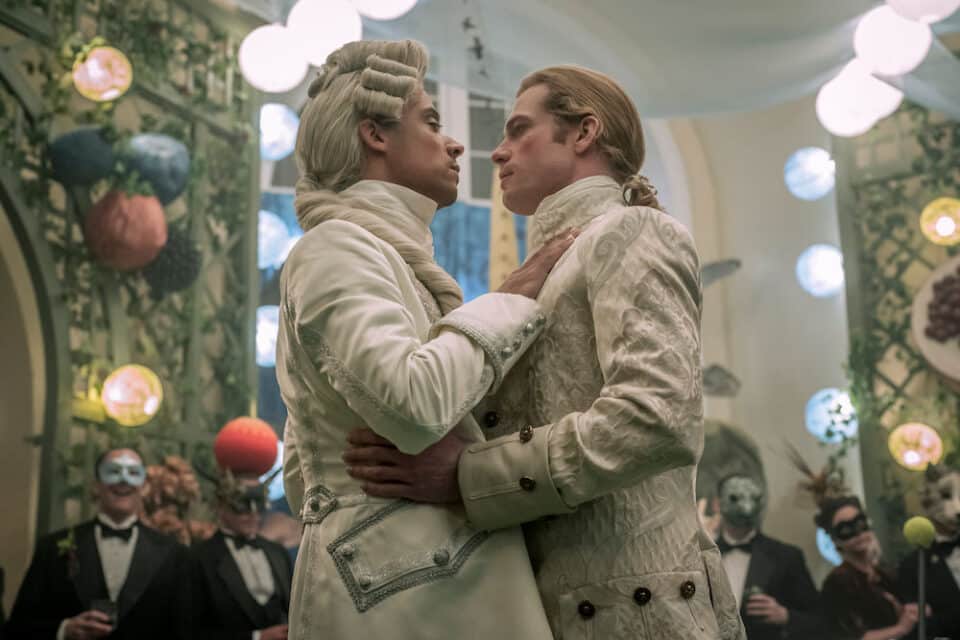 There’s always been something queer about vampires. Vampire stories are traditionally rife with dark desires and invisible secrets from their early canonisation in popular culture. But what happens when the subtext becomes the text, and vampires come out of closets as well as coffins?

In the golden age of streaming television, there’s no shortage of queer vampire stories. AMC’s new Interview with the Vampire series is the latest in a wave, riding the success of FX’s bisexual bloodsucker mockumentary What We Do In The Shadows and Netflix’s teen lesbian series First Kill.

Interview With The Vampire revisits Anne Rice’s 1976 novel and Neil Jordan’s 1995 film adaptation of the same name through a modern lens, suggesting the lack of open queerness in the earlier iterations were the result of unreliable narrators. When the titular vampire Louis reunites in the modern day with his human interviewer Daniel, he explains that the original interviews omitted the romantic nature of the relationship to his vampire maker.

Queer-coding monsters is nothing new: monster stories are often allegories for social outcasts of one kind or another. Vampires have been used as metaphors for xenophobia, antisemitism, and class tension, but queerness has always been an especially popular interpretation. They are androgynous creatures of the night. They can be predatory or tragic, craving human flesh in forbidden ways. If you’re inclined toward psychoanalysis, the conflicting imagery of penetrating teeth and sucking mouths is easy to interpret as sexual innuendo.

There are many vampire mythologies around the world, but their affinity for queerness really coalesced in the late 1800s with Gothic novels. Sheridan Le Fanu’s Carmilla in 1872 portrayed a young woman seduced by an aristocratic vampire. Bram Stoker, a closeted gay man, was heavily influenced by Le Fanu when he wrote Dracula in 1897.

American vampire films struggled with Hollywood’s repressive Hays Code, a censorship system enforced from the 1930s-1960s that forbade sex, violence, or any form of “perversion”. Still, Bela Lugosi and the British Hammer horror films embraced the camp overtones necessary to slide past censors.

Meanwhile, bloodsucking women thrived on television: Vampira hosted a titular show from 1954-1955 and Lily Munster was the vampire housewife of The Munsters (1964–1966).

Paranormal queer literature is a thriving sub-genre in publishing: Fledgling by Octavia Butler, Certain Dark Things by Silvia Moreno-Garcia, Jewell Gomez’ Gilda Stories, and Rebekah Weatherspoons’ Vampire Sororitiy Sisters series are popular examples. Even the Twilight series, which might seem like the pinnacle of heterosexual culture, relies on the vampire as a metaphor for repressed sexual desire. Twilight depends on our historic understanding that blood is not what vampires really want.

With a heavy weight of history, 2022’s Interview with the Vampire finally makes the subtext text. It’s a risky move: when a character says “there’s an elephant in this room”, there’s no showmanship in watching them tiptoe around it. But unlike the vampires themselves, queerness doesn’t crumble on exposure to the harsh light of day. Instead, representing the implicit intimacy between the vampires allows the show to explore deeper, thornier problems around public appearances, interracial relationships, and destructive codependency.

Queer representation in mainstream media is owed to the hard-won campaigns for public acceptance. There are affirmative examples like Heartstopper and Queer Eye that give queer people the wholesome happy endings they were so long denied. But of course queer audiences have baggage: for so long queer audiences had to embrace monsters as their champions, interpret violence as a stand-in for intimacy, and brace for relationships ending in destruction.

Queer people have grown to love dark and difficult stories that often mythologise the secrecy and struggles of our real lives. It can be hard to identify with de-fanged versions of the queer experience.

Naja Later is Academic Tutor in Media and Communications, Swinburne University of Technology. This article is republished from The Conversation under a Creative Commons licence