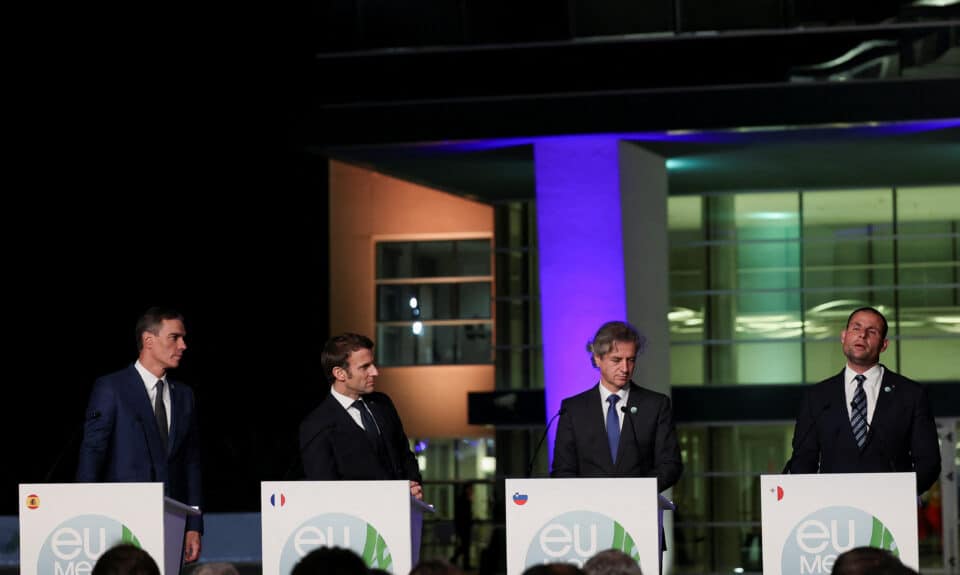 The leaders of the nine Mediterranean countries in the EU agreed on Friday to push for a dynamic cap on gas prices rather than a fixed ceiling, Spanish Prime Minister Pedro Sanchez said.

“We will work in that direction so we (EU) can agree on a dynamic and efficient cap on gas prices,” he said, without specifying, after a summit of the nine countries in the Spanish city of Alicante.

Before the summit Spain had proposed a dynamic cap, which suggests a fully-fluctuating price cap, based on average liquefied natural gas prices plus a price premium.

Another proposal has been drawn up by a group of EU countries, including EUMED countries Italy, Greece and Slovenia, for a dynamic value that was 75% fixed and 25% fluctuating in response to existing LNG price benchmarks.

EU countries’ energy ministers aim to approve a gas price cap at a meeting on Dec. 13, when EUMED has been expected to present its joint proposal.

EU gas prices have soared this year as Russia slashed gas deliveries to Europe following its invasion of Ukraine.

The European Commission last week proposed a gas price cap that would kick in if the front-month Title Transfer Facility (TTF) gas price exceeded 275 euros ($289) per megawatt-hour for two weeks and was 58 euros higher than a liquefied natural gas reference price for 10 days.

Some countries criticised that proposal, suggesting it was designed with such a high price and with criteria so strict that the cap would never be triggered, and thus fail to cushion their economies from price spikes.

Meanwhile, European Union countries are preparing for extraordinary negotiations on Saturday aimed at finalising a deal on a gas price cap that has divided the 27-country bloc.

EU states have debated for months whether capping gas prices would help or harm their attempts to contain an energy crunch triggered by Russia slashing gas deliveries to Europe, which has pushed up fuel costs and stoked inflation.

The European Commission proposed a price cap last month, and EU countries are aiming to agree on the cap at a Dec 13 meeting of their energy ministers in Brussels.

But with days to go, countries still appear deeply divided, with some EU officials sceptical that a deal can be reached next week.

Around 15 states including Italy, Poland and Belgium have said they want an EU-wide gas price cap, while a smaller camp including Germany, the Netherlands and Denmark are opposed.

After initially calling for a cap, France has this week signalled it is concerned by the potential fallout in financial markets, two diplomats familiar with EU countries’ negotiations told Reuters.

The European Central Bank warned on Thursday the EU proposal may jeopardize financial stability and needed to be redesigned.

A shift in France’s stance could complicate the debate further.

There are currently enough countries in favour of a price cap to formally approve the measure, but if France left that camp, sceptical states could have enough support to block the move.

“We now have two blocking minorities, for and against,” a senior official from the Czech EU presidency said on Friday, adding that the decision may have to be escalated to a Dec 15 summit.

That proposal, dated Dec. 9 and seen by Reuters, would see the cap triggered if prices exceeded 220 euros per megawatt hour for five days on the front-month contract in the Dutch Title Transfer Facility (TTF) gas hub, and were also 35 euros higher than a reference price for liquefied natural gas (LNG) based on existing LNG price assessments.

That is lower than the 275 eur/MWh limit proposed by the Commission, although it is not as low as some countries including Poland say the cap should be.

The latest proposal, which could still be changed, said once triggered, the cap would apply for at least 20 trading days unless the European Commission takes an emergency decision to suspend it.