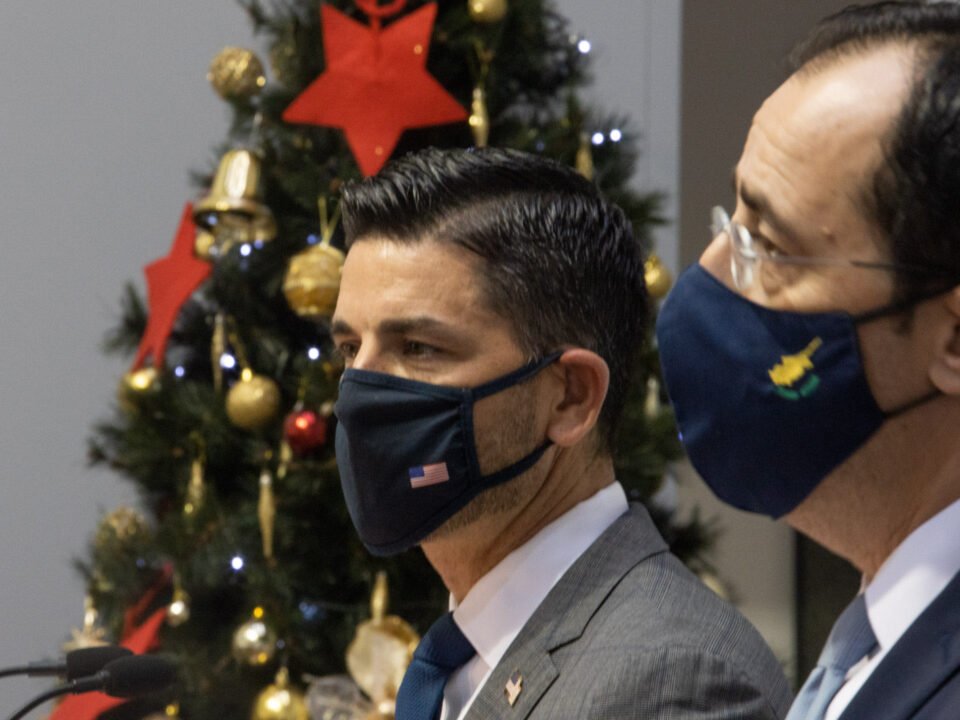 Cyprus and the US on Tuesday signed a Declaration of Intent on strengthening cooperation on border security issues, while reaffirming a shared determination to continue to work towards achieving full visa reciprocity.

The agreement was signed by Foreign Minister Nicos Christodoulides and acting secretary of the US Department of Homeland Security Chad Wolf a day after the two attended a groundbreaking ceremony in Larnaca for the US-backed Cyclops (Cyprus Centre for Land, Open-Seas and Port Security) training facility.

Welcoming Wolf, Christodoulides said the visit was indicative of progress in the Cyprus-US partnership, particularly in areas such as the promotion of regional security, cooperation in the field of defence and security, as well as in the context of other areas such as energy, counter-terrorism and economic cooperation.

He was echoed by Wolf who said that the bilateral relationship between the two countries has never been stronger. “Based on our discussions today, it will only grow stronger,” he added.

Christodoulides made special reference to visas, saying Cyprus’ accession to the US Visa Waiver Programme had been discussed at length and the next steps mapped out.

He did not elaborate. But asked later by CyBC when Cyprus passport holders will no longer be required to secure a visa to travel to the US, the minister said that the declaration of intent specified that this should be achieved the soonest possible.

“There are some obligations under the US programme that must be met. There is a working team on this issue,” he told the TV station.

Addressing the same issue in statements after the meeting, Wolf said the US shared “a willingness to continue to work through our established processes to support the Republic of Cyprus’ progress towards meeting the programme’s eligibility requirements. This will, in turn, facilitate trade and travel while bolstering our security partnership.”

During their discussions, the two also had the opportunity to identify ways of further expanding cooperation on security issues, including through training, transfer of know-how and development of infrastructure.

Christodoulides also briefed Wolf on the latest developments on the Cyprus Problem. “

The US official later held a joint meeting with the interior and justice ministers Nicos Nouris and Emily Yiolitis to discuss issues relating to managing external borders, migration and security.

According to a statement from the justice ministry, Yiolitis discussed with Wolf ways of tackling common challenges, such as cybercrime, effective border management and combatting terrorism.