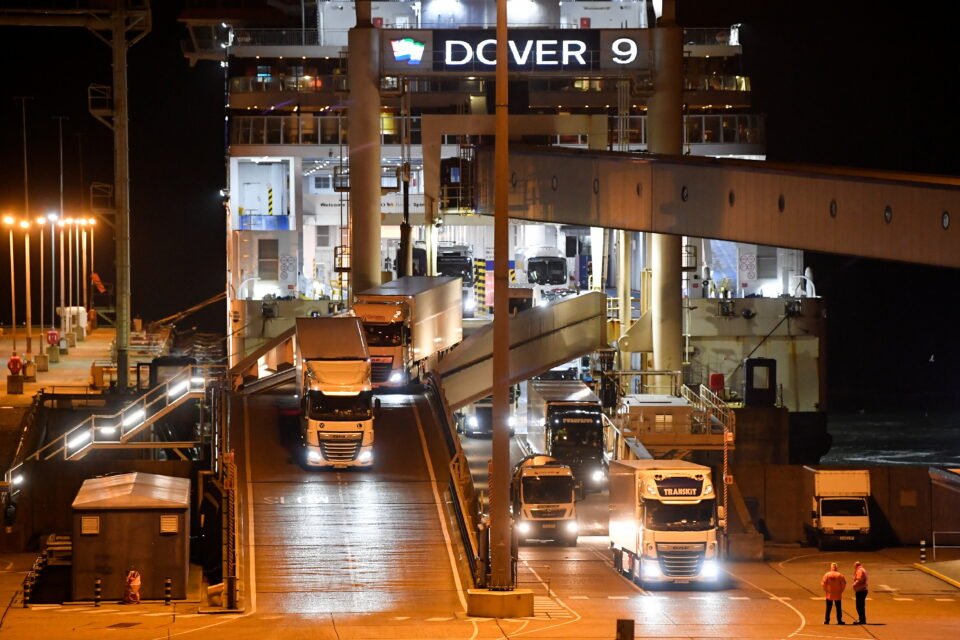 The first freight lorries disembark from a cross channel ferry at the Port of Dover following the end of the Brexit transition period, in Dover, Britain, December 31, 2020. REUTERS/Toby Melville

The Agreement for Trade and Cooperation between the EU and the UK was achieved virtually at the last moment after difficult negotiations. It mainly covers the trade of goods and foresees zero tariffs without quotas for all products that fulfil the rules of origin criterion. However, it does not cover in a comprehensive manner vital sectors such as financial services, movement of labour, data protection and access to tertiary education. In this sense, it resembles a “hard” Brexit. In the sphere of financial services, important areas such as cross border provision and equivalence of qualifications are only lightly covered.

From an economic and geopolitical perspective, Brexit clearly represents a negative development. The UK is an integral component of Europe and the EU is the primary economic partner of the UK. The agreement is effectively one without precedent, considering that the original vision was to achieve free trade through the creation of a single market but, in the process, restrictions were imposed aiming at safeguarding UK national sovereignty goals. Interestingly, both sides can claim that their fundamental negotiation objectives have been achieved.

UK gains the freedom to adopt national approaches on policy and regulatory issues, including the politically sensitive issue of controlling immigration. Within this context, the central slogan of the Brexit campaign “take back control” appears to have been achieved.

At the same time, the EU succeeded in preserving the existing framework of the single market. The UK access to the EU market remains in place but is conditional upon the UK’s adherence to state aid rules and only for as long as environmental, social and other regulatory arrangements in line with EU standards are maintained. Should this not be the case, counter measures in the form of tariffs may be imposed.

Turning attention to the negative effects of the agreement, most analysts agree that the UK will be affected to a greater extent. The country’s economy is expected to suffer a loss of 4 per cent of its GDP, due to controls on the trade of goods as well as restrictions in the provision of financial services, which constitute a key economic pillar of the UK. The already signed, as well as the envisaged, agreements between the UK and third countries are unlikely to offset these loses.

Beyond the negative repercussions emanating from the unavoidable restrictions in economic transactions between the EU and the UK, additional adverse effects arise due to the uncertainly and the volatile character of the future relations between the two sides across vital sectors, including financial services, air connectivity, research cooperation, etc. Even in the area of trade of goods, mutual unimpeded market access is conditional on long-term policy convergences and the implementation of EU standards, as explained above.

In general terms, it can be stated that the UK’s objective for political autonomy aiming at formulating policies in line with national priorities has been achieved but only at the expense of considerable economic and social costs, and only to the extent that today’s globalised environment allows the exercising of such autonomy in practice. At the same time, the UK is confronted with national challenges (i.e. Scotland, Ireland) while its geopolitical influence is likely to diminish.

For Cyprus, the agreement has prevented more adverse outcomes. It allows, to a satisfactory extent, the continuation of trade relations with the UK which has traditionally constituted a very significant partner. At the same time, despite potential problems relating to air connectivity, the agreement limits the losses for the tourism sector from a permanent devaluation of the UK sterling which would have likely occurred under a non-agreement Brexit scenario. As far as financial services are concerned, the standing of the UK as a service provider is expected to decline, although the country is expected to retain its role as an important financial centre. Negative repercussions are further anticipated with respect to access to university education, employment of Cypriots in the UK, as well as with regard to the attractiveness of Cyprus as a residence destination for British pensioners.

For some time now, the Brexit decision has represented a negative development. The final agreement transforms this decision into a practical arrangement, which is a preferable option compared to a no-deal Brexit, that would have led to even higher losses for both sides and the UK in particular. The implementation of the agreement will require a spirit of goodwill, which would contribute to the creation of a climate conducive to ongoing future cooperation. The continuation of an intensive dialogue to cover in a more comprehensive manner vital areas, including services, labour movement, data protection, education and research, would also be crucial towards serving the long-term interests of both sides.

Andreas Charalambous is an economist and former director of the Ministry of Finance.

Omiros Pissarides is the Managing Director of PricewaterhouseCoopers Investment Services.

How does the rattlesnake emit its ominous warning?