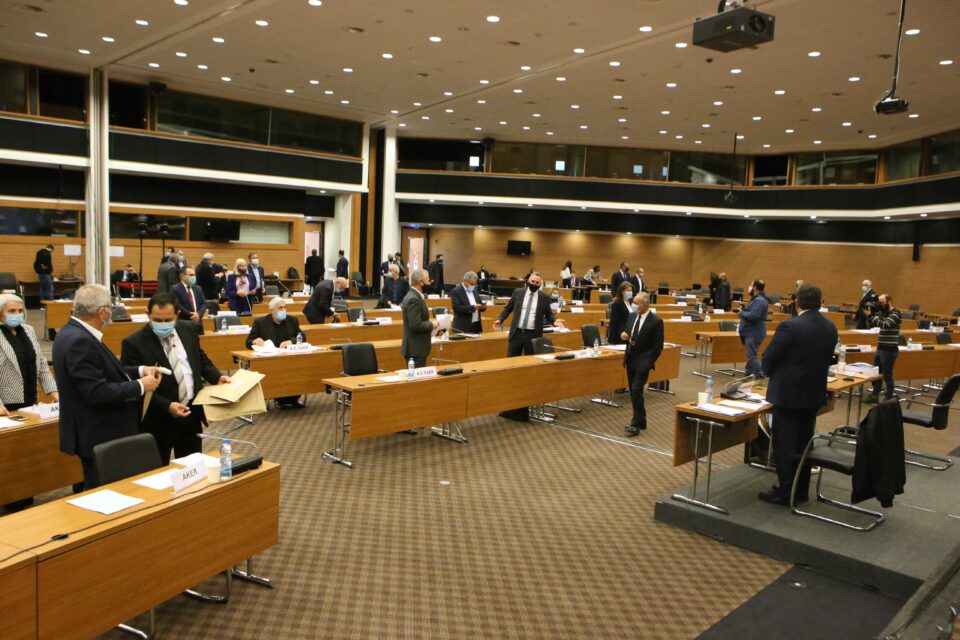 The House on Thursday during the budget debate (Christos Theodorides)

With 29 votes for and 26 against, the House on Thursday passed the revised state budget for 2021, unlocking hundreds in millions earmarked for coronavirus relief to businesses and households.

The revised 2021 budget – considered crucial to deal with the economic fallout from the coronavirus situation – provides for €7.16 billion in expenditures. Projected revenues are €6.48 billion.

The balance tipped in the government’s favour when socialists Edek announced on Wednesday evening they would back the state budget citing satisfaction of most of the proposals it had made to the government for more generous social benefits.

Solidarity also came on board earlier on Thursday, announcing they would vote for the bill but “under protest.”

The government’s balance sheet had been rejected by parliament when first put to the vote back in December.

The budget bill had been defeated after junior opposition Diko gave it the thumbs-down, on the grounds that the government was refusing to provide access to the Audit Office to files with information relating to the controversial citizenship-by-investment scheme.

In a statement soon after the House plenum passed the budget, President Nicos Anastasiades thanked the parties voting for, saying that in this way they “averted a new crisis for the country.

“Their constructive stance – despite any political differences – is a mark of progress and shows, on their part, that they are politically mature and can behave patriotically.”

The passing of the budget, the president added, allows the state to focus its efforts on the problems caused by the pandemic, “making the most of our capabilities for growth and prosperity.

“We are now able to support the healthcare system, upgrade our hospitals, support businesses and workers, and stand by our vulnerable fellow citizens.”

Finance Minister Constantinos Petrides, who in recent weeks had pushed hard for the new budget to go through, likewise welcomed the development. He had gone so far as to warn that, without an approved budget, Cyprus might lose its sovereign investment grading, making it extremely difficult to borrow.

He also thanked the opposition parties in particular for their responsible stance, whose support “helps us avoid new misadventures and dangers to the country.”

“Without the budget,” he added,” “we would surely have had a difficult time. We are already facing difficulties as it is due to the economic crisis, but at least now we have the ammunition so that, clear-headed, we can overcome this crisis and handle it better than other countries.”

Looking ahead, the minister said a great deal of work is needed to exit the recession.

“What we need is a less toxic environment, greater consensus and a sense of responsibility from all.”

Parliament temporarily halted proceedings when around 4.30pm a tremor was felt. Some MPs left the chamber and then a break was called. The plenum session resumed shortly afterwards.

Opposition parties leveraged the government’s desperation to get the budget through, and managed to pass a number of important amendments of their own.

One such amendment blocked any funds earmarked for denationalising/privatizing public entities or government departments – except where expenditures relate to developing the port and marina at Larnaca, development projects in Troodos, the Cyprus Stock Exchange, as well as any actions relating to the Solidarity Fund. But any expenditures on these items must first secure written consent from the House finance committee.

Under another amendment, any spending by the interior ministry relating to due diligence over the citizenship programme that is farmed out to private consulting firms, must likewise receive prior consent from the House finance committee.

Also, the same House committee will approve any expenditures relating to the EU’s Recovery and Resilience Facility.

During the horsetrading following the initial budget’s rejection, the government promised to consider a number of policy issues set forth by opposition parties – starting a social dialogue to establish a minimum wage, a minimum pension, retirement at 63 for certain occupations, and preparation of a scheme to help borrowers whose loans were deemed unviable for inclusion in a mortgage relief scheme.

Pelosi insists on Trump impeachment trial, ‘moving on is not how you unify’