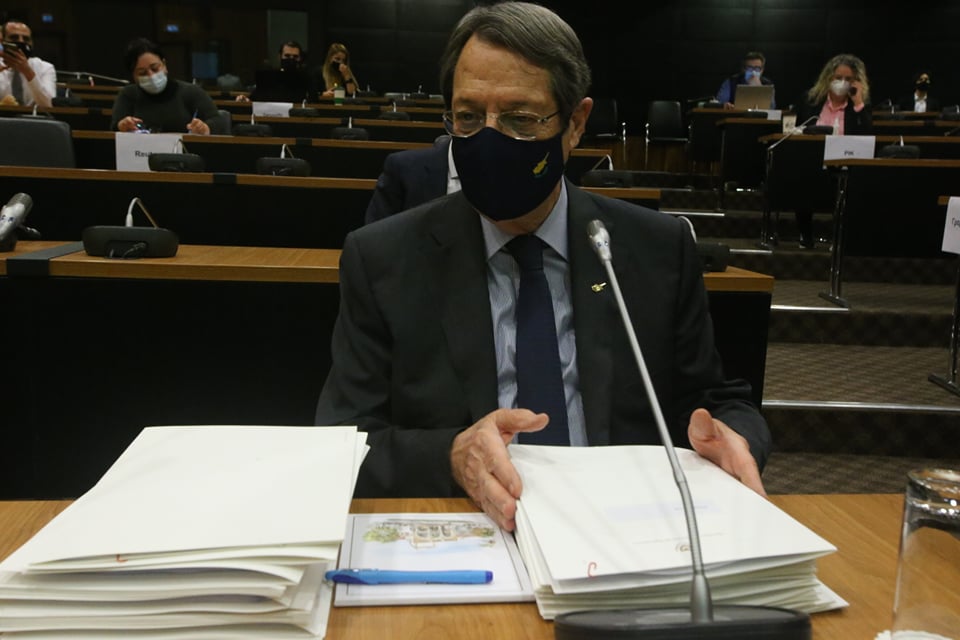 President Nicos Anastasiades testified under oath on Tuesday that he never favoured any foreign investor seeking a Cypriot passport, and denied any conflict of interest or quid pro quo in relation to the citizenship-by-investment (CBI) scheme, nixed in October last year.

“I never interceded for or against any citizenship applicant. If anyone has information to the contrary, let them produce it,” Anastasiades told a panel investigating the controversial scheme’s ins and outs from its inception in 2007 to August 2020.

The president looked stress-free as he walked into the room, trading pleasantries and jokes with reporters before proceedings got underway.

After a lengthy opening statement, where he went through the evolution of the CBI during his administration, the president was asked about his former law firm’s ties to the scheme.

He freely conceded what was already common knowledge – namely that the law firm had filed 57 applications on behalf of foreign investors.

Of these, only a fraction occurred during the time he was president.

He said that as far back as 1997, on becoming head of the Disy party, the workload left him no time to deal with his law firm’s business.

And in March 2013, upon being elected President of the Republic, he severed all ties with the firm, transferring his shares as partner to his daughters.

Asked if his law firm may have farmed out other applications beyond the 57, Anastasiades called this one of the “myths” doing the rounds on social media and in the press.

“If I wanted to favour certain applicants or to promote my law firm, it would have been easy to assign everything to a different law firm. Why would we file 57 applications from my own law firm if we had something to hide?”

On whether any relatives of his were shareholders or held managerial positions in companies acting as promoters of the CBI, Anastasiades said no.

A panel member then mentioned that one of Anastasiades’ sons-in-law sat on the board of directors of a developer linked to the marina in Ayia Napa – a €300 million investment through which certain foreign nationals obtained Cypriot citizenship.

“What does it matter if [my son-in-law’s name] is on the board? The question should be whether there occurred any deviation from the rules governing the granting of citizenships,” the president responded, hinting that all was above board.

Inevitably the panel visited the issue of Anastasiades’ known association with a Saudi Arabian sheikh, who along with dozens of relatives got Cypriot passports in 2015.

Committee chair Myron Nicolatos advised the president he could decline to answer lest he potentially incriminate himself.

Undeterred, Anastasiades said he had no problem speaking on the subject as he wanted to clear up the matter once and for all.

He said the initial group of six Saudis – the sheikh and five others – granted citizenship not only did not get preferential treatment, but rather ended up investing collectively around €20 million instead of the €15 million required.

This fact, he asserted, shows that no favouritism was shown to the Saudi – suggesting that in turn the sheikh ‘owed’ him nothing in return.

The auditor-general launched a probe into the affair after it transpired that the presidency had used a private jet to travel to New York for the UN General Assembly in September 2019.

It later emerged that the owner had been granted Cypriot citizenship in 2015. 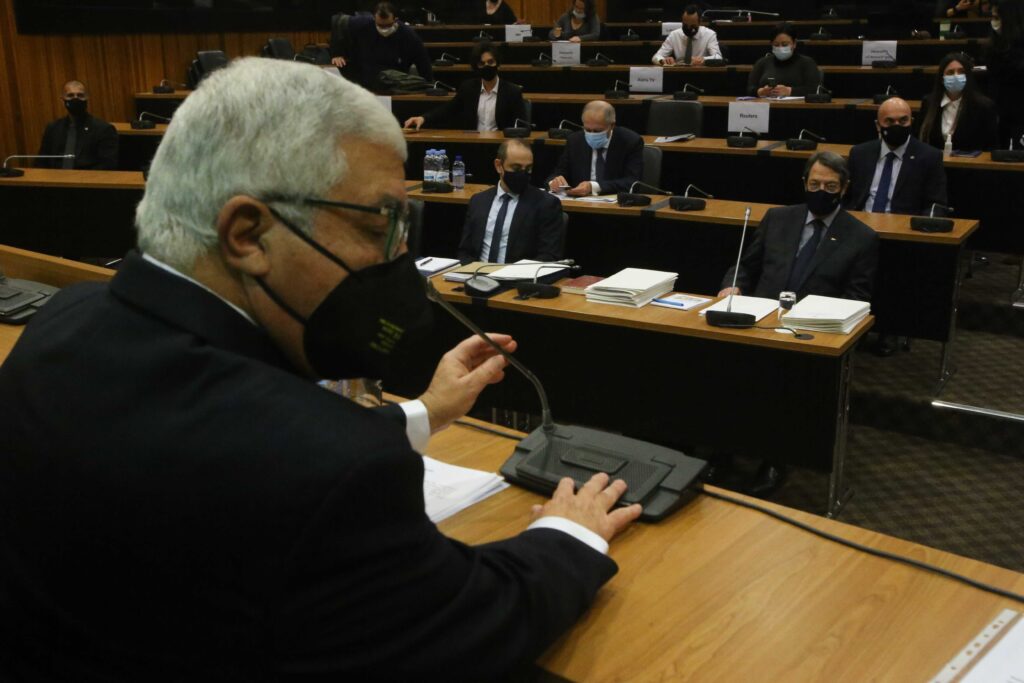 According to the auditor-general’s report, a joint citizenship application had been filed by the owner of the jet, two siblings and three other individuals.

“These individuals were granted Cypriot citizenship with a cabinet decision dated January 14, 2015,” the report said.

It later transpired the president had used the Saudi investor’s jet to fly to the Seychelles for a holiday with his family.

According to Anastasiades, he traveled twice to the Seychelles aboard the jet – in 2015 and then in 2018. But only the 2018 trip was free, a gesture from the Saudi.

The president was also queried on allegations made in a recent editorial which, without citing evidence, claimed that during a trip to Athens Anastasiades let slip that his former law firm was making €300 million annually, “which he would then fly to the Seychelles on private flights.”

To which Anastasiades quipped: “I don’t even know where the banks are located [in the Seychelles]. Besides, it’s not as if this were some secret trip…my daughters were posting about it.”

The same aircraft was also used to fly the president to EU meetings.

For one trip to Paris in November 2019, the lowest airfare Anastasiades and his entourage could find came to €77,000. The Saudi, by contrast, offered to fly them there for just €20,000.

Anastiasiades said the state saved close to €1m from arrangements like these, and lamented the way investors like the Saudi businessman and others had been given bad press.

“Of course I knew the Saudi, we were friends. I never acted as his lawyer.”

He suggested it was networking like this that at times brought investors to Cyprus – but that did not mean any quid pro quo.

On how the cabinet would make decisions on naturalisations, Anastasiades said the body merely rubberstamped a list of names – cleared by the interior ministry – brought before it.

Cabinet members were handed a synopsis of the names recommended for citizenship, with very few details. The synopsis did not mention, for example, the promoter/facilitator of any given applicant.

This was a significant point, given speculation that either Anastasiades or certain cabinet members had ties, directly or indirectly, to some of the promoters – which would amount to a conflict of interest that would have to be declared so that cabinet members recused themselves from any decision-making.

But since the synopsis before the cabinet did not name the promoters, that would presumably give the ministers plausible deniability.

Echoing previous officials testifying before the panel, the head of state acknowledged the investment scheme had flaws – for example up until 2018 there was no rigorous screening of applicants.

This situation, he granted, did allow a few bad apples to slip through cracks – such as the Malaysian businessman Jho Low.

The scheme’s criteria and background checks were gradually beefed up, so that by the time more safeguards were introduced in July of 2020 it became “the strictest” investment migration programme in Europe, Anastasiades claimed.

Do you really need to bother with eye cream?

Coronavirus: Opposition remains to carrying out autopsies on those with Covid