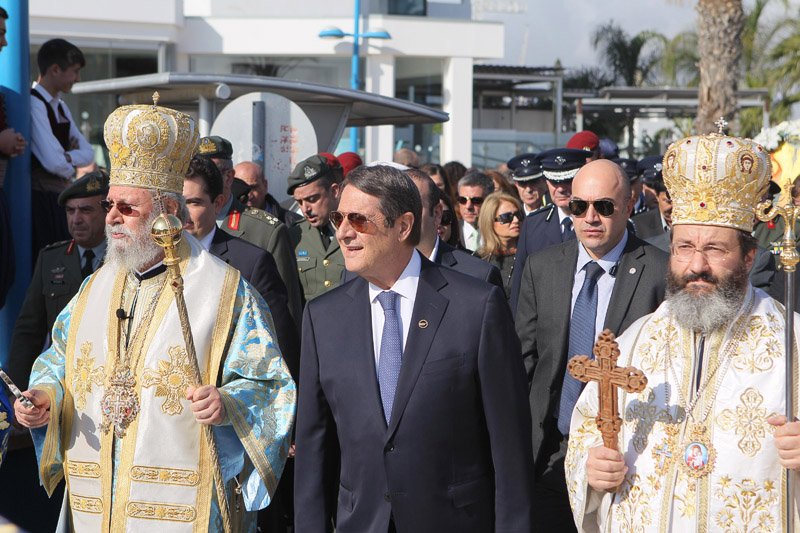 NOT many people know that Chrysostomos is one of Mozart’s many names. His full name is Johannes Chrysostomus Wolfgangus Theophilus Mozart.

The current Archbishop of Cyprus is also a Chrysostomos, but it is not just a name they have in common. In their own way they both produced music to Turkish ears.

Unlike Archbishop Makarios, who used words carefully and well, Archbishop Chrysostomos is not as careful. Both the Archbishop and President Anastasiades do not really mean what they say when they claim they prefer a two-state solution. It is a rhetorical device that should not be taken seriously, bearing in mind that on the national question Archbishop Chrysostomos is close to the position of Elam – Cyprus’ answer to the fascist party in Greece known as Golden Dawn.

I hold no brief for the Greek Cypriot case nor am I a pro Greek Turkish Cypriot, it is just that understanding Greek Cypriot concerns repays attention. My mother was Greek Cypriot, and I am able to wear a Greek Cypriot hat and see the nuances of what they really mean rather than the literal meaning of the words they use.

When using two states as a rhetorical device to decry a federal solution a minority of Greek Cypriots are actually being passive aggressive. What they really mean is that Turkish Cypriot claims to shared sovereignty and equality under a federal umbrella are unacceptable; so let them build a two-state wall and stay on the other side.

If Turkish policy is now relying on the idea that both Church and State in the RoC prefer a two-state solution, it is based on a false prospectus since the RoC has absolutely no intention of self-destructing and no intention of agreeing the secession of northern Cyprus.

Last week a Turkish Cypriot contributor who was very nice about my piece asked what I thought was a reasonable solution for both sides based on reality and truth – I think he meant in place of two states. The question is a fair one because it is no good pontificating without having some idea of a solution in mind.

The best approach is first to diagnose the problem and then find the right prescription. I start with the proposition that historical treaties that settle long standing differences between peoples and states going back centuries, have to be respected and only changed by agreement between the two communities domestically and by treaty change internationally.

My diagnosis of the problem in Cyprus is that both sides prefer to cherry pick the 1960 constitution and the treaties on which it is based when they should have been complying with its terms or agreeing changes by negotiation.

The constitution was devised in Zurich in 1959 by Greece under the premiership of Constantinos Karamanlis – the best prime minister of modern Greece in the second half of the 20th century – and Turkey, under prime minister Adnan Menderes. Both knew what they were doing when they agreed the basics of Cyprus’ constitution – apparently the original was in French which suggests the British did not have a hand in drafting the basics of Cyprus’ 1960 constitution.

The 1960 treaties of establishment and guarantee provide that separatist independence and union with another country are excluded under Cyprus’ constitution. This is fundamental because it was the basis on which the RoC achieved statehood. I know it grates with many Cypriots on both sides, but you mess with such arrangements at your peril.

Interestingly, the territory of the RoC that is said to be one and indivisible, could be amended without treaty change and without a referendum. This could have been done by the simple expedient of a vote passed by two thirds of the representatives of each community.

The Cyprob could have been solved in one fell swoop after it became clear that the RoC could not provide state protection to all its citizens in 1974 by substituting the provision that declares the RoC indivisible with a clause that its territory be restructured into two federated states to take account of the demographic changes of 1974-75.

Beyond that I do not know enough about the detail to make suggestions except that so far as I can see Turkey has an obligation under the 1960 treaty of guarantee to re-establish the state of affairs created by that treaty if, as she claims, she took action to uphold the independence of Cyprus and the 1960 constitution – a classic example of cherry picking, given she is now promoting two states in breach of her undertaking to protect the independence and integrity of Cyprus contained in article II of the treaty.

The RoC is operating the 1960 constitution albeit in accordance with the principle of constitutional necessity owing to the absence of the Turkish Cypriots from its ranks. I honestly do not recall whether the Turkish Cypriot members of the government of the RoC withdrew or were excluded after 1964 –  it was certainly not safe for them to continue in their posts.

I know that Turkish Cypriot judges stayed on for a little while but then had to vacate their posts. Some had to seek employment in Britain and the Commonwealth. I remember Judge Vedat Dervish who had a great sense of humour sent my father a picture of a huge mosquito taken in the Cameroons where he became a judge after vacating his post as president of the Nicosia District Court.

In principle the most practical way of finding a workable solution is to build on Cyprus’ 1960 constitution rather than wiping the slate clean.

The constitution of Cyprus has already been amended to give pride of place to EU law when Cyprus joined in 2004. So once the Cypriots agree two federated states the European Commission will have to get to work under Protocol 10, to provide a blueprint for how the EU legal order would be extended to northern Cyprus with Turkish Cypriot input, to enable it to assume the responsibility of enforcing EU law in the Turkish federated state in northern Cyprus.

The way ahead is to begin slowly, gradually, incrementally reactivating the dormant provisions of Cyprus’ 1960 constitution, and people will hopefully begin to see light at the end of the tunnel and agree amendments where necessary as cooperation gathers momentum.

Tales from the Coffeeshop: A gift for splitting hairs and spinning gestures