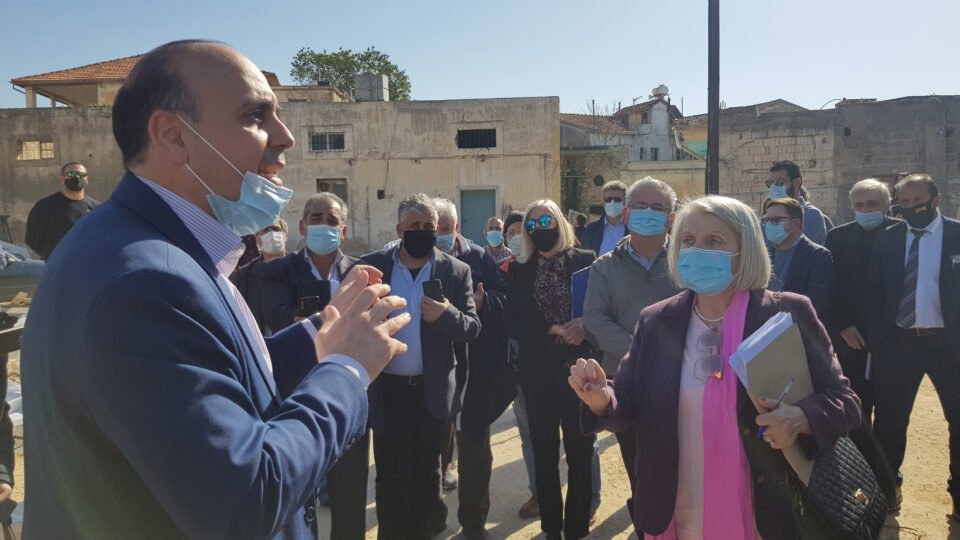 The mayor and MPs in Mouttalos last week

A probe will be launched on whether there have been arbitrary interventions by the Paphos municipality in Turkish Cypriot properties in Mouttalos, Interior Minister Nicos Nouris said on Tuesday.

Speaking after a meeting of the House committee on refugees where the complaints by refugees living in properties in the Mouttalos area against the Paphos municipality were discussed, the minister said he has already given instructions for a probe into the matter.

He added that the administrative probe aimed at finding out if there had been either criminal or disciplinary misconduct even among interior ministry officials. “And of course, to clarify whether these interventions that are made by the municipality of Paphos into specific properties, refer to properties that have been leased to the municipality or to some that have not been leased.”

The minister was invited by the committee in a bid to shed light on the controversy that has risen after interventions by the Paphos municipality into Mouttalos properties sparked strong reaction among local residents. They accuse the Paphos mayor of arbitrarily interfering in their properties, by tearing down fences and other infrastructure in their yards and cutting down trees to create a parking lot.

The interior ministry will also introduce a review of the concession of Turkish Cypriot property, including financial criteria, since thousands of acres of agricultural and other land have been granted to people that also have a large amount of property, the minister said.

Members of the refugee committee recently visited Moutallos, where police intervened to restore calm following tense verbal confrontations that took place.The visit was part of an inspection of works carried out in the area, which have provoked protests from refugees.

Phedonos said the visit was a fiasco and called out the committee for undermining the difficult work of the municipality to remove the illegalities that have been a chronic problem in Paphos for decades.

Phedonos issued a statement on Tuesday, noting that he was not invited to attend the House session as committee president and Akel MP Skevi Koukouma had “threatened” last week.

“This is just adding to the game of micro-politics and disorientation the committee has been playing in recent days to shift its own responsibilities for the looting made with the T/C property to the detriment of refugees who have been wronged, but also to exploit in the run-up to elections the supposed dissatisfaction of a very small proportion of refugees.”

During the session, Nouris said the municipality of Paphos as an urban planning authority has the power to remove illegal and dangerous structures and that it is not the ministry’s job to prevent it from applying its powers.

He added that the ministry is conducting an investigation to determine whether the municipality started making interventions before leasing a specific property.

“This particular investigation will also seek to find whether criminal offences have been committed and possibly disciplinary offences by the ministry’s services, and its findings will be delivered on March 2,” the minister said.

Phedonos said he had requested the minutes of the committee’s last meeting during which he was attacked with insults, only to be told they do not exist.

“I have been informed in writing that there are no recorded minutes of the meeting, for which I asked the speaker of the House. The minutes do not exist because if they gave them to me I would make them public and they would be exposed, since the lies that were told at this meeting and which they reproduced would be revealed,” he added.

However, he said that the truth will not be silenced or covered up.

Hundreds of refugees that now live in Paphos have been brutally wronged over time, while a few refugees and non-refugees enjoy super-privileges through T/C properties. No one talks about all this, he said.

“I’ve been fighting for five years and I’ve brought up dozens of such cases and in several of them illegal privileges have been terminated. I’ll keep going.”