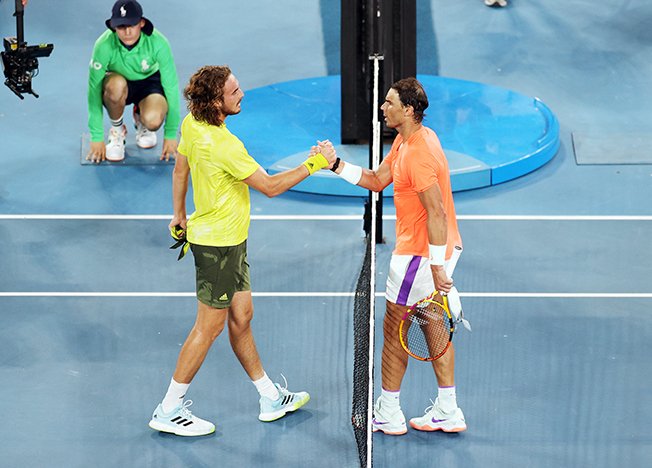 Rafa Nadal’s bid for a record 21st Grand Slam title came crashing to a halt at the Australian Open on Wednesday as Stefanos Tsitsipas rose up to topple the Spaniard 3-6 2-6 7-6(4) 6-4 7-5 and reach the semi-finals.

World number two Nadal had not lost a set coming into the evening clash at Rod Laver Arena and was locked on target for the last four at Melbourne Park after roaring to a two-set lead over the listless Greek.

The match turned on its head when Nadal wavered in a messy third set tiebreak, and a rejuvenated Tsitsipas rallied brilliantly to take the match into a decider.

Capturing Nadal’s serve at 5-5 in the fifth, Tsitsipas saw two match points slip through his fingers as he served for the match but fired a backhand winner down the line on the third to claim one of his finest career victories.

“Well done for him, he played better than me probably in the important moments,” Nadal told reporters.

“I tried my best in every single moment … I think I stayed positive all the time during the match, fighting, and it was not enough. Sometimes it’s enough, today was not enough.”

Fifth seed Tsitsipas will meet Russian Daniil Medvedev for a place in the final.

“I fly like a little bird and everything was working for me,” Tsitsipas said on court.

“The emotions in the end are indescribable.”

Coronavirus: Three countries in Category A after new risk assessment